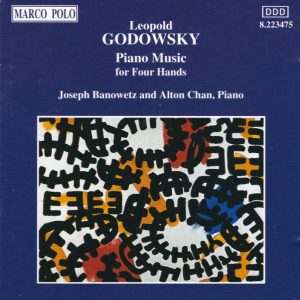 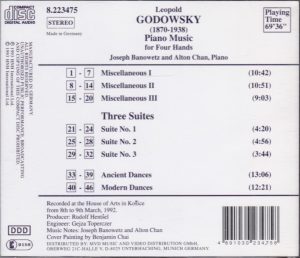 The 4-hand piano music of Godowsky must really be a niche interest. If you have an interest for late 19th-early 20th century pianistic virtuosity, chances are you are a fan of Busoni – and that makes you already “a specialist”, ready to tread away from the beaten path of Brahms, Liszt and Rachmaninoff -, Paderewsky, and that you are familiar with the masterful and daunting Studies after Chopin’s Etudes of Godowsky, and possibly his paraphrases after the Waltzes of Strauss. And, if you are really “a specialist”, you may even have ventured as far as Godowsky’s  Piano Sonata, Passacaglia, Walzermasken and Triakontameron. When you’re there, you’re probably really part of a “happy few” gang.

And now, here’s some more: although Marco Polo’s front and back cover doesn’t say so, letting you think that they are a gathering of different collections, these 4-hand piano pieces were in fact published as a collection “Miniatures” for piano four-hands, arranged in 8 books. You can find the score on IMSLP  (link will open new tab). On the CD the 8 books are played in a different order from the score, where the Suites come first, then the Ancient Dances, Modern Dances, concluded by the three books of Miscellaneous. They were published in 1918, and apparently, they were very successful in their time. The score uploaded on IMSLP is a reprint with a new preface dated December 1934; the original score, of the Three Suites only, is available from Scribd, but with subscription.

They are not what you’d expect of Godowsky, based on his compositions mentioned above. They are alternately gentle and playful, light-hearted, Saint-Saëns comes to mind and even, at times, in the playful movements of the Miscellaneous books (track 2, 5, 6, 7,  10,12, 15…)  Poulenc. Nothing as harmonically personal as Poulenc, mind you – the music is enjoyable, lovely, entertaining, but  no truly distinctive personality emerges. You can attribute within seconds to Rachmaninoff, on blind hearing, a piece of his you don’t know, but I challenge anyone who listens for the first time to these pieces without knowing who their composer is to exclaim “oh, yes, of course, unmistakably: Godowsky!”

In fact, the music sounds very much in the mood of “Kinderstücke”, pieces for children (may of the gentler numbers are in the mood of a lullaby), in the manner of Schumann’s “Album für die Jugend” or (as the liner notes point out) his “Twelve Four-Handed Pieces for Big and Little Children” op. 85 – and no wonder. The liner notes don’t mention it, but when you go to the score’s preface you  realize that indeed these 46 Miniatures were conceived as pedagogical pieces. Let me quote:

“My 46 Miniatures for four hands (for pupil and teacher) were composed to enable the beginner – whether child or adult – to start the art of pianoforte playing with music as good and inspirational, as aesthetic and character-building, as the music we hear at serious public concerts. The novice’s introduction to music should be, from the start, attractive, inspiring, cultural.

My aim is to interest while I instruct; to educate while I entertain. (…) The treble (upper) part is for the pupil; the middle and bass part, for the instructor. However, when the pupil advances sufficiently to do so, the second part can, and should be used by the pupil, while the Primo is played by the teacher. Strange as the statement may seem, the treble or upper part or Primo, which are all synonymous terms, may be played with equally great benefit by the advanced player. The reason for it is the fact that the Primo part is built mainly on five adjacent white keys (five numbers are on black keys only), this maintaining and ideal position of the had all the time.”

Godowsky himself held his Miniatures in high esteem. There’s a touching testimony of his mentioned by the collection’s publisher in the scores Preface: “I have given a great deal of thought and loving care to the Miniatures and though the pieces are smaller and considerably less complicated than anything I have ever written, they represent the best there is in me. The experience and assimilated knowledge, the aims and aspirations, the hopes and ideals, the disappointments and yearnings of a sensitive nature and an artist’s soul are all to be found in this series of simple five-finger pieces. Working within such self-imposed limitations has convinced me that economy of means leads to a superior form of concentration, and the resulting concentrated effort produces the quintessence of human endeavor, matrially and spiritually. The resourcefulness needed in dealing frugally with the means at our command often opens up unexplored and unsuspected regions of imagination. In working on the Miniatures I have been amazed at the possibilities created by the adopted restrictions (…)”

In all honesty, I’m not as overwhelmed as that. The music is certainly charming, although a certain impression of sameness may arise in the course of the disc’s well-filled 70 minutes. Godowsky seems to have agreed, the pieces weren’t meant to be played as a whole. He ends his preface by stating that “any and all of the Miniatures are suitable for concert performances when arranged in attractive groups of contrasting numbers, preferably to be played by the two performers on separate instruments. All Miniatures are particularly qualified to be used on the radio due to their conciseness, brevity and diversity of content, mood and form.”

I have no comment other than positive about Joseph Banowetz and Alton Chan’s playing.