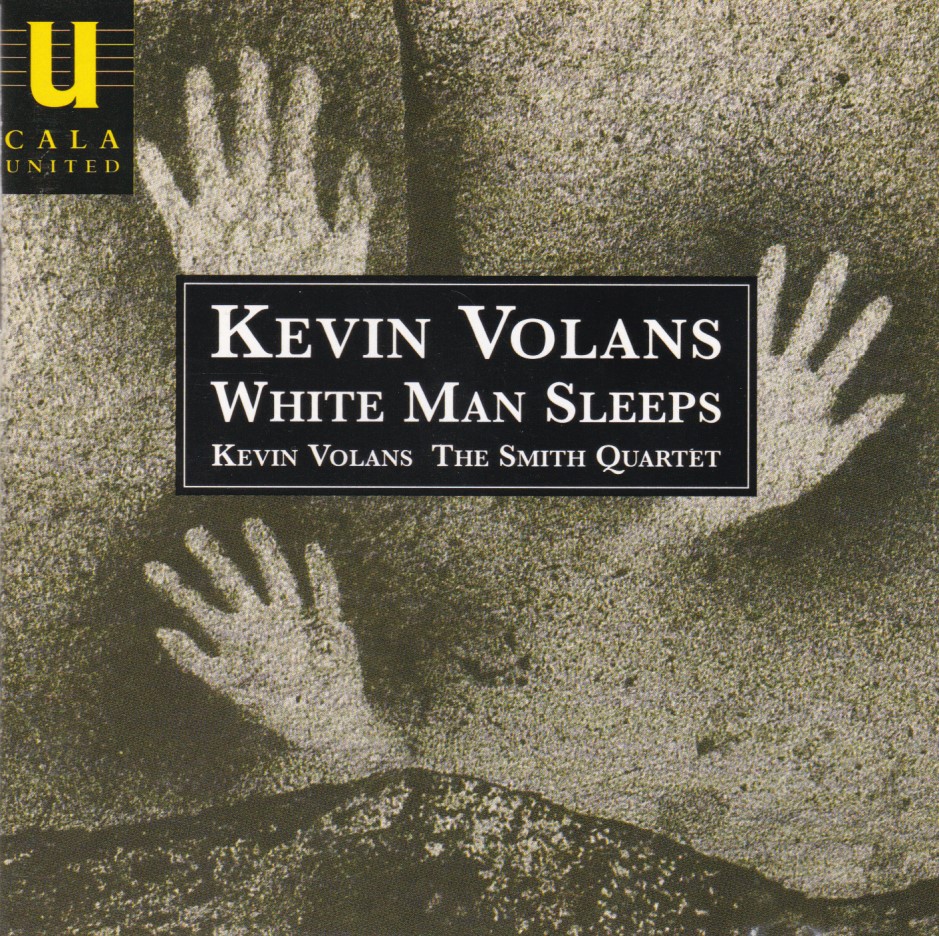 Where Volans came from
Originally posted on Amazon.com, 27 March 2015

I was really curious to hear the original version of Kevin Volans’ “White Man Sleeps”. His first String Quartet, commissioned, premiered in 1986 and championed by the Kronos Quartet, is the piece that really put him into the limelight. Justifiably so. It is infectious, teeming with repetitive energy and catching melodies, the encounter and cross-breeding of the rhythms and colors and melodies of Africa and of the instrumental ensemble that, in Volans’ own words, “encapsulated the very heart of Western classical music“. The cryptic indication on the Kronos disc “Pieces of Africa“ (Elektra Nonesuch 9 79275-2), that they are playing the “original, unrevised version”, tends to confuse the matters; maybe Volans revised the version of the premiere for publication, and Kronos are playing that earlier, unrevised version; but frankly, on comparative listening, I do not detect any striking differences between the three recordings I have, other than a coda of the second movement played MUCH faster by the Kronos – but whether it is interpretive liberty or score prescription I don’t know – and possibly an abridged first section of the fourth movement and some longuer patches of repetition in the finale, but again whether those are options offered by the score or actual differences in the scores’ prescriptions, I don’t know.

But the string quartet is in fact the reworking of a previous composition of Volans, from 1982, bearing the same title, but scored for two harpsichords, viola da gamba and percussion. The choice of the instruments and melodic sources derived from Volans’ wish to write music in non-equal-temperament, African tuning. The melodies are picked from various South-African sources, but also are of Volans’ own invented folklore, and even the authentic sources he subjected to various rhythmic transformations and instrumental displacements that, he claims now, makes the music “unacceptably Germanic” – but one doesn’t need to believe this very coquettish self-deprecation. Volans says he resisted the Kronos request to rework it for string quartet, feeling that it would entail dropping the African tuning which was at the heart of the composition. But then he gave in, because, precisely, the string quartet “encapsulated the very heart of Western classical music” and because, by masking the source material, it would make his intentions – “a reconciliation of African and European aesthetics” – clearer.

By Volans’ own admission, the transposition and retuning made the composition into an entirely new piece, and not only because he moved it a pitch higher and placed the last movement of the original piece in first position of the quartet version, allowing for a gradual quitening of the music: “when Kronos asked me to do White Man Sleeps for them, I became interested in the issue of translatability. I have come to the conclusion that the color of the instruments or the color of the sound that they produce, is as important for the meaning of the music as the pitch, or the rhythms, or anything else.”

Hearing then the original version draws the following comments: first, kudos to Volans’ friend the British composer Adrian Jack, director of the new music series at the Institute of Contemporary Arts in London, for sensing that the original piece could be successfully turned into a string quartet: I find the 1982 version not nearly as infectiously appealing as the reworking. The original version does let you hear more of its African derivation: you can easily fancy that the two harpsichords are clanging mbiras (“the generic name of a popular African instrument with a set of plucked keys, a soundboard and resonator“, says Volans, and indeed his earlier composition “Mbira”, directly inspired by the instrument and also featured on the CD, is scored for two harpsichords and rattles), while the accompanying percussion seems to consist of much rattling maraca. But the piece is also more heavy-footed than its string quartet offshoot, trudging even at times, with none of the latter’s sonic sensuousness. Some movements are very similar to the later reworking, namely the 2nd (string quartet’s third) with its viola da gamba pizzicatti followed by harpsichord’s staccato pinches and gamba bowing harmonics, the 4th (SQ’s finale) with again its scurrying gamba pizzicatti, and the last (SQ’s first) with its heavily rattling duet of spatially spread apart harpsichords. On the other hand the character of the first (SQ’s second) and third movements (SQ’s fourth) are changed beyond recognition, the former from a trudging and rattling wade to a brisk race, and the latter from a lively dance to a slow, plangent dirge.

It may be that I’ve heard the string quartet version too much. The reading by the Smith Quartet is the third I have, after those by the Kronos Quartet (see link above) and the Duke Quartet on Black Box BBM1069. Like the Duke’s, despite its added presence and vividness of sound and its superior power (try the cello outburst at 2:40 in the first movement), the Smith’s version is less infectiously dynamic, lithe and light-footed than the Kronos’, and most dramatically so in the second part of the third movement, where nobody better than the Kronos has captured the music’s dance-like lilt. Don’t get me wrong, though: the fascinating appeal of the music remains untarnished and nobody will go wrong with the Smiths.

“She who sleeps…” is a busy percussion piece (owing nothing to African drumming says Volans) involving skin percussion until the last two minutes when pianissimo marimba enters. The lovely Mbira for two harpsichords (tuned in African tuning) and rattles, composed in 1980, two years before the first version of Whire Man Sleeps, is particularly interesting for letting you hear where Volans came from: its spirit and atmosphere are exactly the same (although the gait is less trudging), with the two harpsichords imitating perfectly (as far as I can tell) the African instrument, to the point that you wonder why Volans didn’t write it directly for it. In view thereof, his move towards the string quartet makes even more sense, making it obvious that he wasn’t so much trying to imitate African instruments as to cross-breed African and European traditions.

TT 72 minutes, excellent liner notes. Mbira and the original White Man Sleeps were recorded by the Cologne radio in 1984, they come in good sound and Volans was one of the harpsichordists, so the interpretations must be considered authoritative. The two others were recorded in 1989, WMS for SQ in the studio and the percussion piece live, and I hear no difference in sound quality.