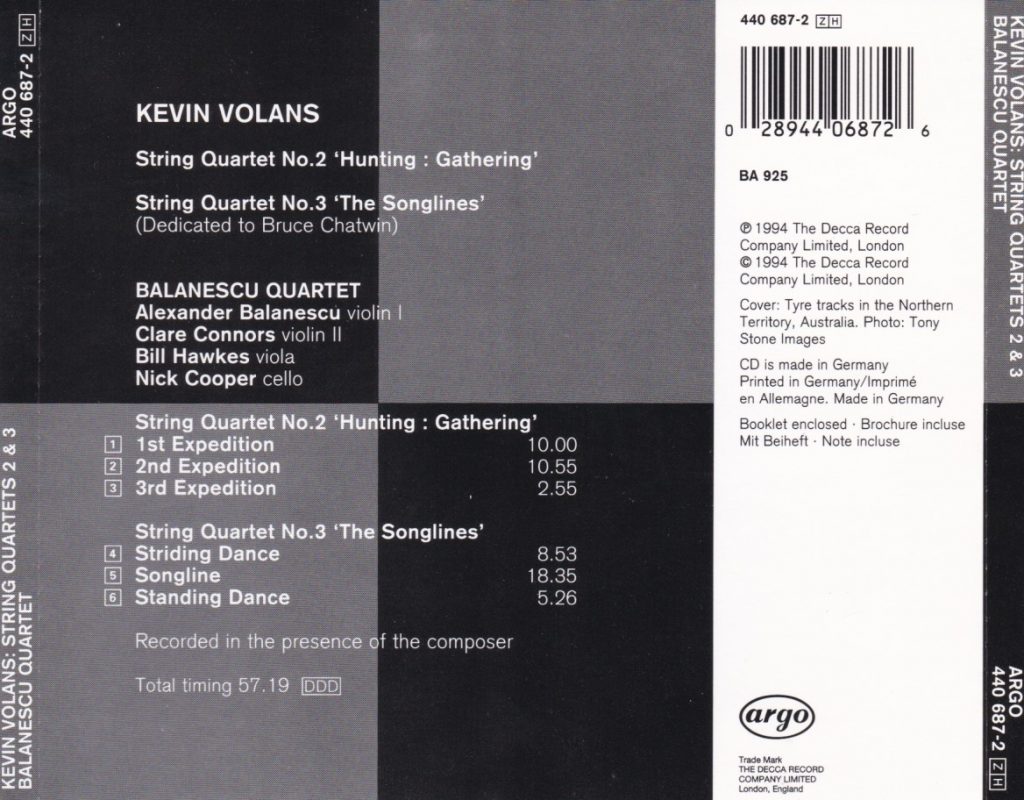 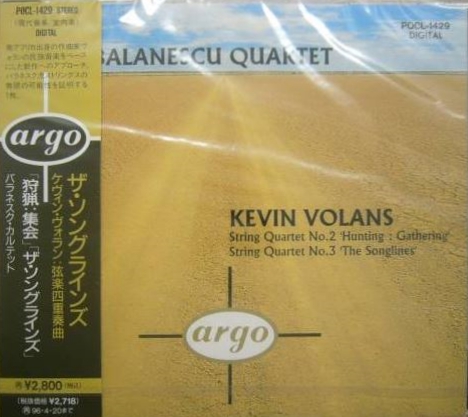 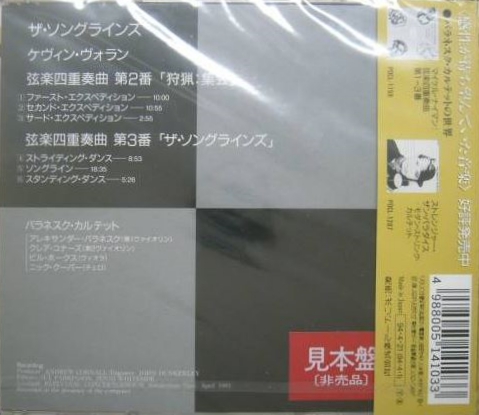 I listened to “Hunting: Gathering”, Kevin Volans’ 2nd string quartet, before reading the liner notes, and this is what I wrote down: unpredictable, inventive in sound, entertaining it is melodic invention.

Reading the liner notes, this sense of unpredictability was spot-on, and exactly what Volans had intended: “When I wrote ‘Hunting: Gathering’ in 1987, I had grown tired of the ‘composition etude’ – the one-idea piece. I decided to try and write a piece which included as many different musical fragments as possible, strung together in a pseudo-narrative. To keep the fragments separate, each is written in a different key. As I wanted the different pieces to come and go in a random fashion like images or events on an unplanned journey, my principal problem was how to move from one key to another without any sense of development (i.e. without modulating). I was also consciously trying to keep the overall scale of events constant not allowing one piece to dominate the others unduly.”

So, OK for the process, but how about the results? As I hinted already, I love it. Melodically, the quartet refers to “several different pieces of African music, ranging from very rough approximations of style to more or less precise transcriptions”. It is hugely atmospheric and inventive. Some hushed upward glissandos irresistibly evoke Britten (the third String Quartet in particular), but then it is a Britten suffused with an African inspiration. It has the appeal and fascination of those African tunes – some dynamic, some more nostalgic – combined with the full resources of the Western string quartet and its ability at producing a wide range of tonal colors. Let me quote Volans’ very informative essay again: despite the rooting in African music, “it is above all the choice of medium, the string quartet, that places the material firmly in the Western classical tradition. Japanese prints informed every aspect of Van Goghs’s late work – the colour, the sense of light the formal thinking. Yet Van Gogh’s choice of oil paint on canvas makes the painting Western European.” The quartet’s title and the titles of the quartets’ three movements – first, second and third “expedition” – remain unexplained. Not that it matters.

The same compositional processes – transformation of African music and “piling” of material without a preconceived formal plan – inform the Third Quartet, “The Songline”, written a year later and a kind of preliminary etude to Volans’ opera written with Bruce Chatwin, The Man with Footsoles of Wind. Because Volans exercised even less formal control than in the previous quartet, this one sounds even more disjointed and enigmatic (especially in the second and main movement), and the music, especially at the end of the first movement, can be rougher (this is to warn the amateurs of World-music; there is nothing here to frighten off a seasoned listener of contemporary music), but it remains equally appealing (the third movement, based on music from Mali, is especially fascinating), and the composer shows again his mastery at eliciting a glorious gamut of tonal colors from the ensemble.

These two quartets, as well as Volans’ first, “White Man Sleeps”, were written for and premiered by the Kronos Quartet (something the liner notes do not tell you). It is I think the Kronos Quartet that initiated this trend for classical music to meet world music and folk music, or again of World-music donning the attire of the Western classical music tradition; in the same African vein of inspiration as these Volans quartets, and featuring indeed Volans’ first String Quartet “White Man Sleeps”, listen to Kronos’ Pieces of Africa on Elektra Nonesuch. Their collaboration with Terry Riley also produced a handful of masterpieces in the genre: see my reviews of Cadenza on the Night Plain on Gramavision  R2 79444 and Salome Dances For Peace on Elektra Nonesuch 9 79217-2. But these quartets of Volans are on a same plane, and I count them, with Riley’s, among the masterpieces written for the medium in the last forty years of the 20th Century, alongside those that are rooted in the western Classical tradition (and truth is, there are many in my pantheon; those of Britten, Ligeti, Lutoslawski, Dutilleux, Penderecki, Yun, R. Murray Schafer, Schnittke, Gubaïdulina immediately come to mind).

The Kronos never recorded the third String Quartet however. Formed in 1987 by the founder and leader of the Michael Nyman Ensemble and former second violin of the Arditti Quartet, the Balanescu Quaret are one of the offshoots of that trend established by the Kronos Quartet. “Possessed” and “Luminitza“, the two discs of “Alternative Rock meets Classical Music” they published on the Mute label in the same years as this Volans disc, with compositions of Balenescu, David Byrne and Kraftwerk, are very entertaining. So it is fitting that they should have tackled these two compositions.

It is a hard call between this disc and the competing recordings of “Hunting : Gathering”, by the Kronos Quartet on Elektra Nonesuch 9 79275-2 (1991) and the Duke Quartet on Black Box BBM1069 (2002); the Kronos’ reading is overall preferable to the two others – leaner-textured, brisker, more light-footed and lively, although the Balanescu and even more the Duke have more beef and an immediate sensuousness of sound that to a certain extent compensates, at least in the first movement, their lesser dynamism; but at their bows the middle movement acquires a completely different character, heavier, almost plangent with Balanescu, deliberate and wistful with the Duke. Only the Kronos has fully captured its lithe, dance-like nature. As for choosing beetween Balanescu and Duke, their approach is very similar really, but the latter have the advantage of better, more vivid sound and sensuous tonal production.

All this would make a clear decision in favor of Kronos, but their quartet comes alone on one of their typical short-timed discs; why they haven’t recorded the third Quartet eludes me. Likewise the Duke would be slightly preferable to Balanescu, but as it is the Balanescu offer the only recording of SQ #3, and I wouldn’t want to be without it (and it is the same with the Duke’s 6th SQ). So I am happy to have the three discs (and like any masterpiece, “Hunting : Gathering” deserves multiple versions as well), but if your finances or shelve space allow only for one disc, the Duke is probably a better offer, as it gives the attractive first SQ, “White Man Sleeps”, as a bonus – although again in an interpretation that is not entirely on a par with the Kronos’ (see link above).

Anyway, the slight interpretive shortcomings pointed here appear only on comparative listening, and will not preclude I believe enjoyment of Volans’ fascinating music.

The next string quartets of Kevin Volans (4 to 6 and a “Movement” from 1987) were recorded also by the Duke Quartet, on two CDs: 4 and 5 on the now sadly demised Collins Classics label, 14272, and the 6th on the Black Box CD referenced above.