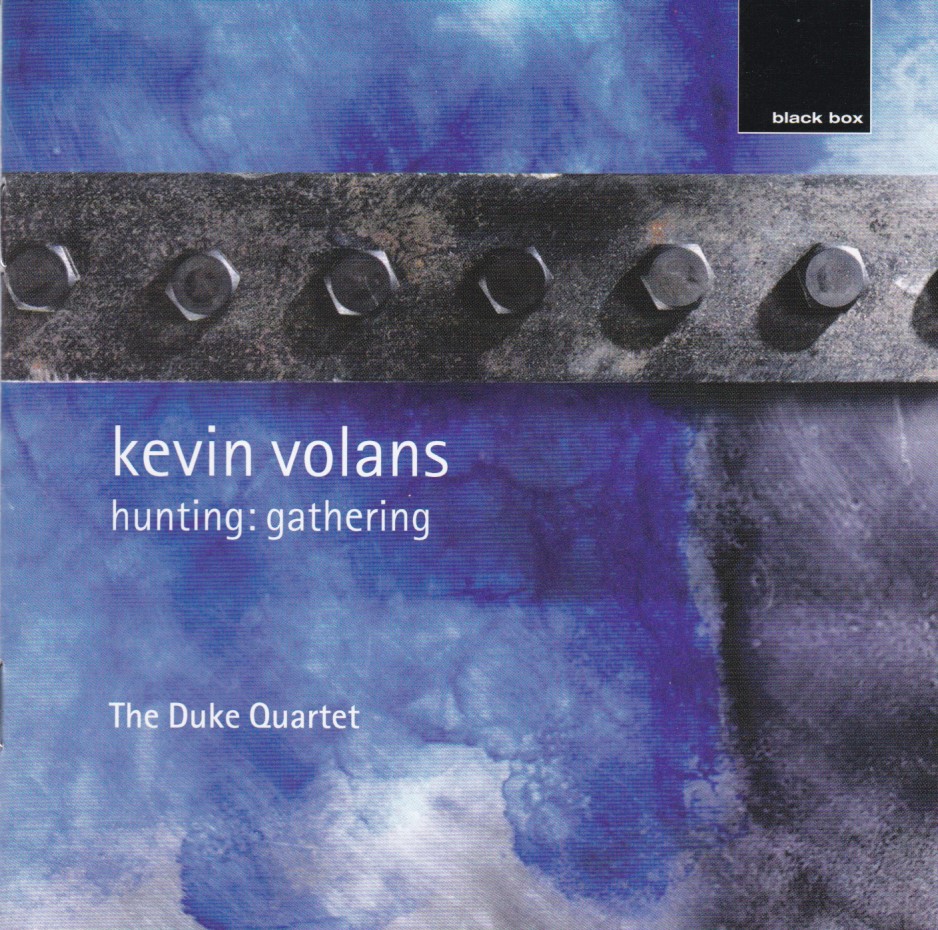 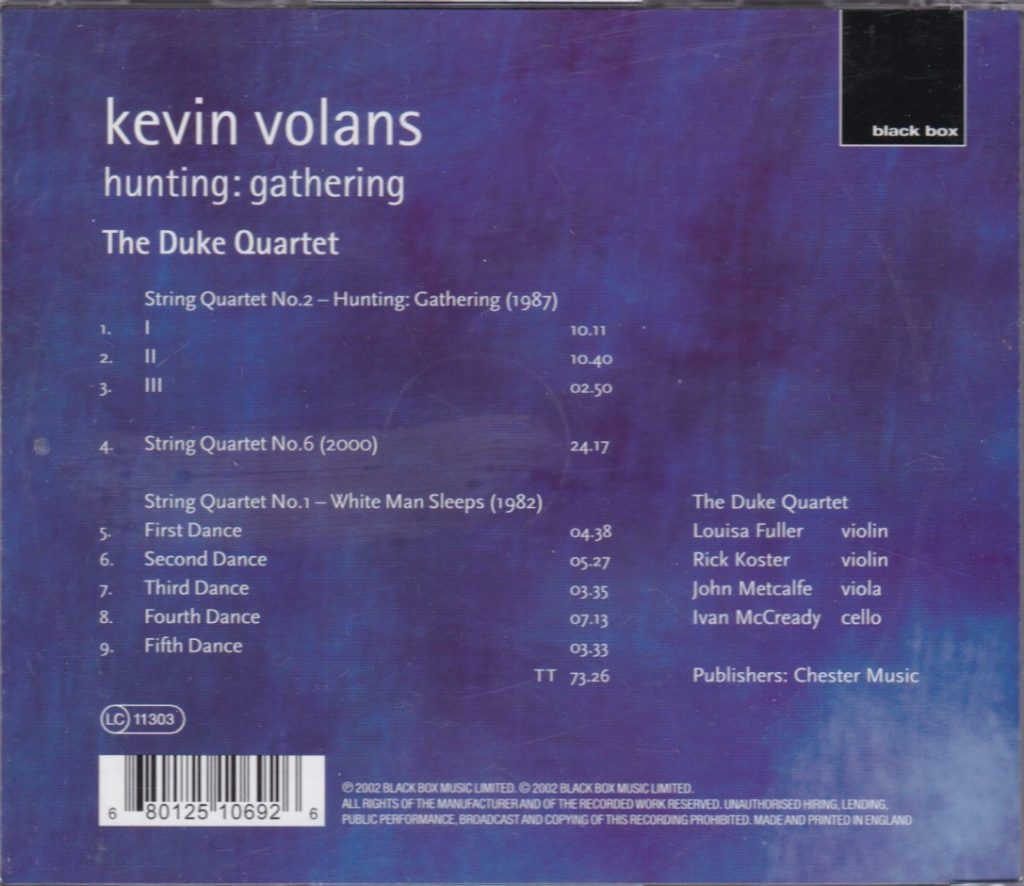 I have been recently following with much enthusiasm Kevin Volans’ compositional development, as illustrated by his output for String Quartet. It started with the hugely appealing African-inspired, dance-like repetitiveness of his first two String Quartets, “White Man Sleeps” and “Hunting: gathering”, and moved in the direction of increasing minimalism and pointillism in the 4th and 5th (the latter recorded on the now-defunct Collins Classics by the same Duke Quartet that is featured on this disc, with a Quartet movement from 1987, Collins 14172). Mind you, the repetitiveness of the first two quartets was NOT minimal, and Volans even called his second the opposite of minimalism, as he sought to include in it as many different music parcels as possible – 23 in the course of its 26 minutes (said Volans – Kronos took less than 22 minutes to play it). The first three quartets were commissioned and premiered by the Kronos Quartet (the first is actually the reworking of a piece originally for 2 harpsichords, viola da gamba and percussion), but they recorded only the first two (“White Man Sleeps” on “Pieces of Africa”, Elektra Nonesuch 9 79275-2  and “Hunting: gathering” on the short-timed Elektra Nonesuch  9 79253-2) and not the third (that was done by the Balanescu Quartet, along with the second, on Argo 440 687-2), so this Black Box recording by the Duke Quartet comes in direct competition with their recordings.

In “White Man Sleeps” the Kronos are preferable: they are more dynamic, biting and light-footed, the Duke more powerful certainly (try the cello outburst at 2:39 in track 1) and lyrical perhaps in a slightly plangent way, but also thick-textured and heavy-footed, despite some interesting points in tone color (like the sul ponticello and slow-paced ending of Dance 2 for instance). Their approach bogs down the 4th Dance, which becomes dirge-like.

The same interpretive values are at play in “Hunting: Gathering”, with the Duke more deliberate and heavy where Kronos is more lithe and lean; here, in fact, the Duke Quartet’s reading is more along the lines of the Balanescu’s, but their added beef and immediate sensuousness of sound (compared to the Balanescu as well) works better here than in the first Quartet, and is at times even preferable to Kronos in the first movement and the short third movement – though not consistently. As in the 4th dance of White Man Sleeps, their approach brings a wistfulness to the second movement but simultaneously tends to bog it down and somewhat looses its lithe, whimsical, dance-like aspect, perfectly captured by the Kronos. This may be my favorite quartet of Volans. It evokes a Britten suffused with the sounds and colors of Africa.

Still, despite these interpretive shortcomings, the Black Box disc is indispensable for featuring Volans’ 6th Quartet from 2000. Here, Volans completes his compositional journey towards a Morton Feldman kind of pared-down minimalism. One interesting aspect of Volans’ compositional attitude is that, more than any other composer I can think of, he seems to draw his inspiration from the visual arts – and his inspirational art is the minimalism of Yves Klein, Marc Rothko, Philip Guston, James Turrell, Agnès Martin, Mondrian, Malevitch. Says Volans, “My ideal would be the equivalent of the blank canvas“. Well, by his own admission, he isn’t there yet (hasn’t Cage already done it in his 4’33” of silence?). Here Volans offers 24 minutes of slow moving chords, succeeding each other, rarely more than a tone apart, each slightly accented. Cage’s 1949 String Quartet (“Seasons”) came to mind. I find it dreamy and wistful, although it doesn’t come close to offering as much to the ear and mind than the first quartets.

Anyway the Black Box disc remains an attractive proposition for those who’d want all three quartets on a single disc. The first two remain Volans’ most entertaining and approachable quartets, and while overall the Kronos’ interpretation may be preferable, the Duke still lets you hear the fascinating beauty of the music. Note also that you can hear the original version of White Man Sleeps on Cala-United CACD88034, played by the composer (the disc also features another recording of the string quartet version, by the Smith Quartet, that is not better than the Kronos’ version). The string quartet version is truly a transfiguration, and I find it much better.