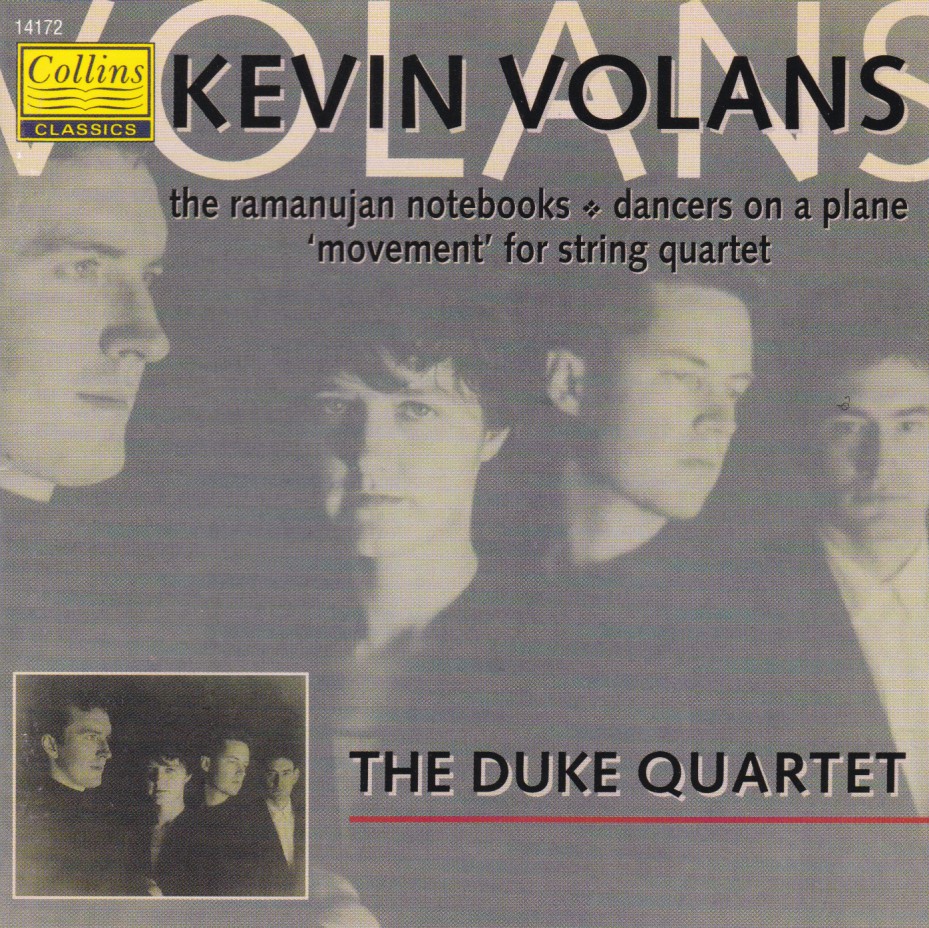 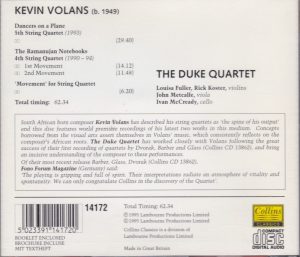 From 1985 to 1988 South African composer Kevin Volans composed three magnificent string quartets for the Kronos Quartet (although Kronos recorded only the first two, “White Man Sleeps” on “Pieces of Africa”, Elektra Nonesuch 9 79275-2 (1992) and “Hunting : Gathering” on the short-timed Elektra Nonesuch 9 79253-2 (1991), leaving second and third to the Balanescu Quartet, Argo 440 687-2 (1994): compositions that have their roots in the processes of repetitive minimalism and in World-music (here the music of various African traditions) but that also, much like the quartets composed for Kronos by Terry Riley (see my reviews of Cadenza on the Night Plain on Gramavision  R2 79444 and Salome Dances For Peace on Elektra Nonesuch 9 79217-2), transcend these origins and genres in a uniquely personal and fascinating manner.

In the 4th and 5th quartets Volans pursues even further his elaborations on African music.

Both alternate between moments that are dance-like – the first movement of the 4th was written in 1990 for a ballet company, with the peculiarity of having been composed AFTER the choreography was created, thus being modelled after its steps and rhythms – and moments of more hushed and slow-moving music developing an intensely nostalgic mood. The 4th Quartet’s second movement was written four years after the first and consists of ten minutes of beautifully hushed, mysterious, enigmatic music, close to the “minimal” minimalism of Morton Feldman rather than the repetitive minimalism of Glass and Adams. It ends with a short coda of more agitated outbursts. The Quartet’s title, “The Ramanujan Notebooks”, comes from the dance-opera that originated the first movement, on the life and work of the Indian mathematician Srinivasa Ramanujan.

The 5th Quartet from 1993 goes even further in the process of “deconstruction” hinted at in the previous quartets. Here the dance-like and hushed moments are intimately mixed together rather than more or less allocated to a specific movement; the dance passages are now pushed to the point of rhythmic jaggedness – there is little if nothing left of the regular and predictable pulse of repetitive music – and the moments of lyrical nostalgia seem made of pure whiffs of music, shards of tunes. Volans has pushed to a new extreme the compositional method first experimented in “Hunting:Gathering”: constructing his quartets by adding fragments of seemingly unrelated music with no preconceived formal plan, just pieced together intuitively. The result in the 5th quartet is more piecemeal and pointillist than I’ve heard it before, like a stream of consciousness, ideas zipping in and wandering out with no apparent logic, or maybe like the rags of a string quartet – no criticism implied in that tentative description. Volans also inserts bits of sound recordings of various environmental noises – daily chores in an African village (I suppose), distant conversations, kids laughing, sounds of nature and animals. In his own words, “it’s rather like making windows in the fabric of the piece and inserting photographic images of the world that gave rise to the music“. Those sounds also reminded me of what Volans had said in the liner notes to Kronos’ recording of his first quartet, “White Man Sleeps”: that a composer (implying: he) was influence more by his environment, the sounds that surround him, than by the culture he was born with or in which he is immersed. That said, I don’t find these insertions so effective and convincing. They don’t add much to the music, and on the contrary rather interfere with it, I find. The sources of inspiration of a composer are his “kitchen matters”, as it were. He who eats the meal doesn’t necessarily need, or want to know how it was cooked. But at least the insertions are occasional and short. The quartet’s title, “Dancers on a Plane”, derives from a canvas by Japer Johns, in which the painter inserted “figurative references to Tantric art in the midst of abstract patterning” (you can see a photo on the website of the Tate Gallery in London. Incidentally, the painting is deticated to choreographer Merce Cunningham).

Although an earlier piece (1987), “Movement” for string quartet is written much in the same pointillist style, and again it derives its inspiration from the visual arts, here a painting of Philip Guston, “Painter’s Forms I”. As the later quartets it is supremely lyrical in its fragmentary shards of music, and fascinating in its use of the instruments’ high registers, like the cries of some jungle mammals or birds. In fact, much here as well as in the like passages of the two other quartets brought those of John Cage to mind.

Because of their pointillism the quartets are not as easily accessible and immediately appealing as Volans’ first three, but on repeated hearing I’ve found them highly ingratiating and rewarding. They evidence a composer unwilling to sleep upon the laurels of an established style and intent at moving on and exploring new stylistic pathways. Makes me eager to hear Volans’ 6th Quartet. TT 62:34.