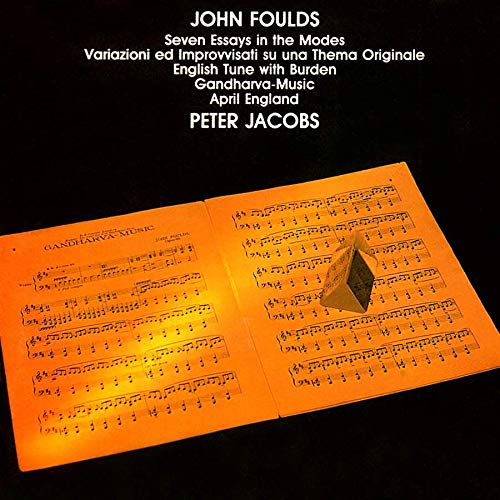 Recording information not provided on the CD 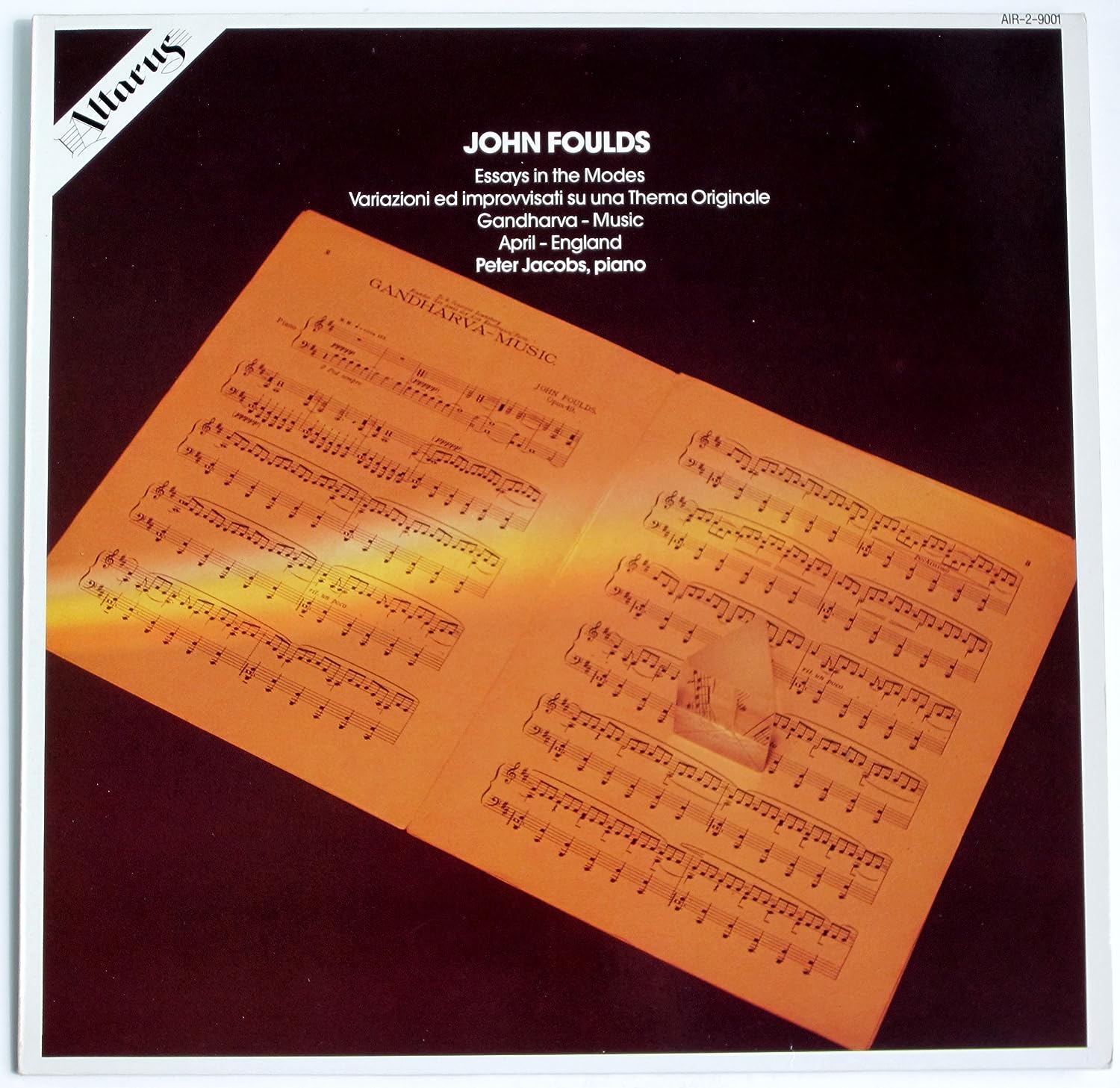 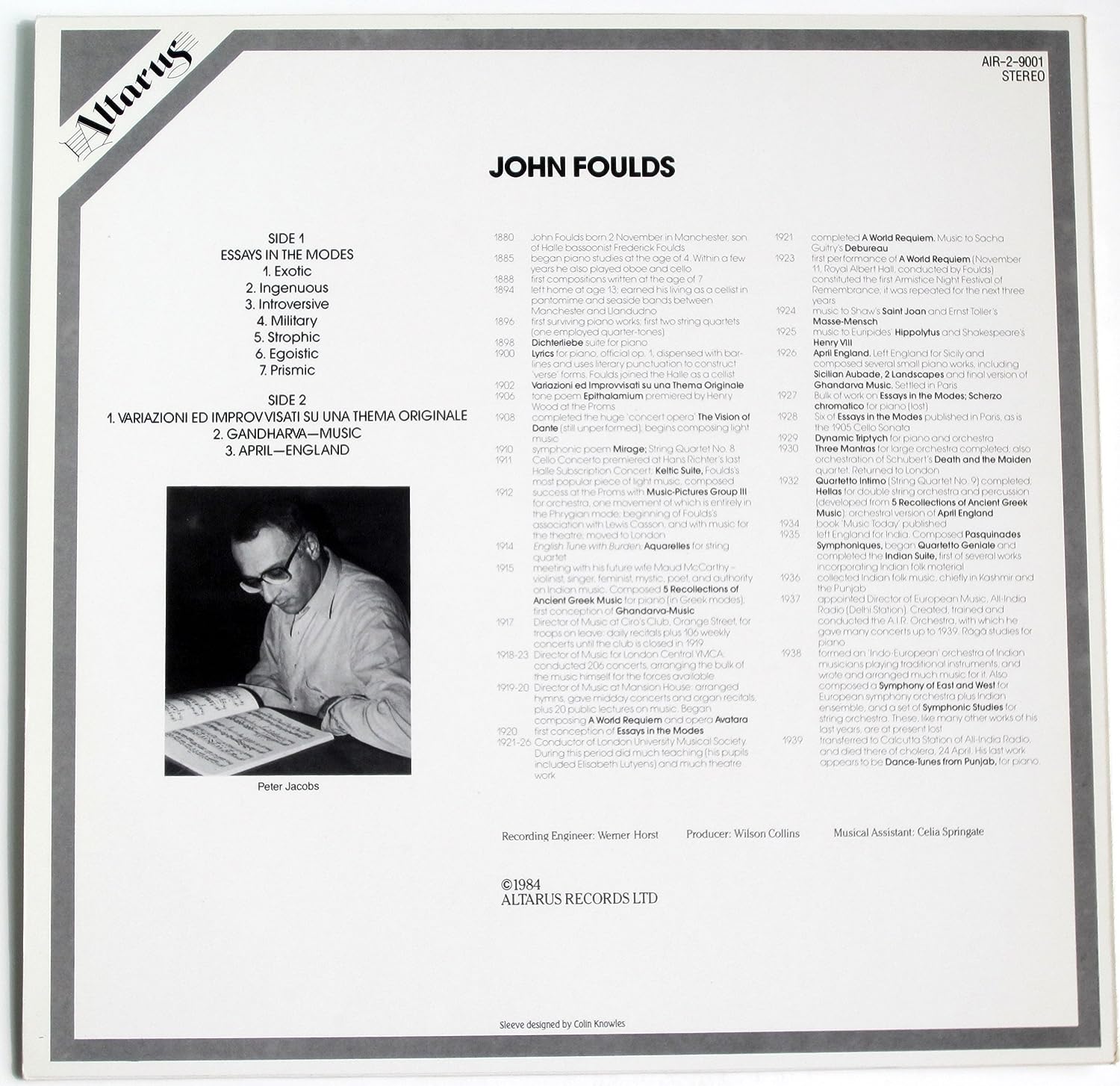 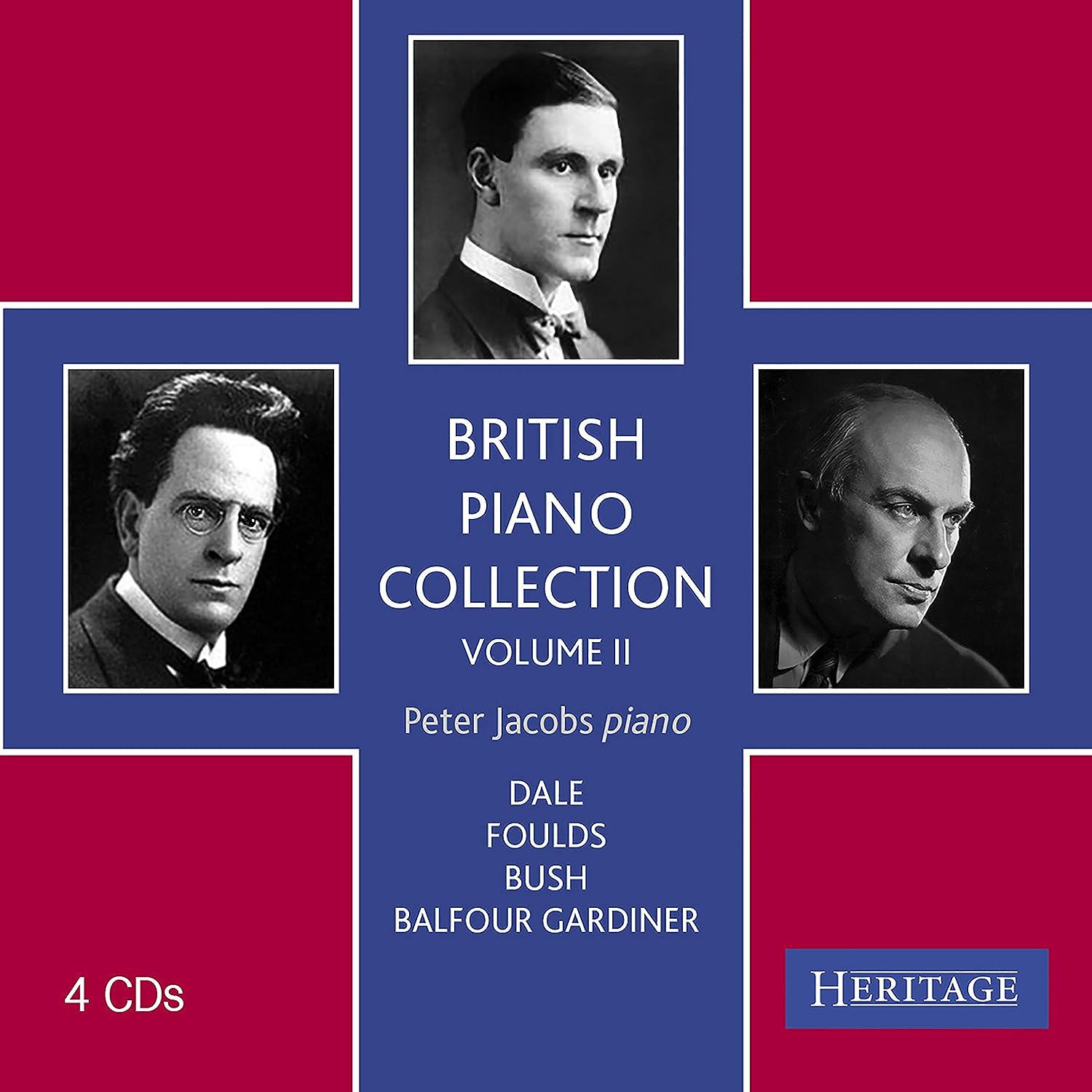 John Foulds long remained an all-but-forgotten figure of British music. Born in 1880, the son of a bassoonist in the Hallé Orchestra, he had a measure of success in the 1920s, and his huge World Requiem was given a yearly performance in London between 1923 and 1926, but his success as a composer of light music overshadowed his more serious endeavors, to his great irritation. When the World Requiem fell out of favor Foulds’ career suffered a setback, and eventually he established in India, working on a synthesis of Eastern and Western music and writing for ensembles of traditional Indian instruments (he had been interested in Indian scales much earlier). But his geographical remoteness and sudden death of cholera in 1939 durably put him out of the music scene. The staunch advocacy of musicologist Malcolm MacDonald (who contributes the liner notes of the present disc, as well as of about all the other Foulds discs that have come my way) and the recording by Pearl of some of Foulds String Quartets in the early 1980s (which is the medium through which I discovered the composer: Pearl SHE CD 9564, barcode 5015903956427 or 727031956426, see my review on Amazon.com pending repost here), signalled the beginning of a revival, which had a (small) recent culmination with the release by Warner Classics of two discs of orchestral music conducted by Sakari Oramo (2564 61525-2 barcode 825646152520, see my review on Amazon.com, and 2564 62999-2 barcode 825646299928), and by Chandos of the first modern performance of the World Requiem under Leon Botstein, SACD Chandos 5058(2) barcode 095115505823 (all this info comes from the excellent Foulds page on Wikipedia). More a trickle than a flood, but a trickle is better than a drought.

This collection of Foulds piano music by Peter Jacobs was recorded in 1984 and first released on LP (without the 5-minute long “English Tune with Burden”), but it didn’t get much notice back then (apparently it wasn’t even reviewed in Gramophone or Fanfare). The CD reissue and the liner notes are from 1991/2, and since then BIS published another disc of Foulds’ piano music, by Kathryn Stott, which largely duplicates the contents of this one (BIS-CD-933, barcode 7318590009338, see entry on Discogs.com). As the highly informative liner notes indicate, Foulds was a competent pianist and wrote for the medium throughout his compositional career: his official opus 1 (there had been previous works) was a tiny piece for piano, “Lyrics”, and so was his final work, left unfinished, “Dance-Tunes from Punjab”. The Seven Essays in Modes, composed mostly in 1927, are studies in non-diatonic scales – Foulds had grown early on, way before his move to India, a special interest in the scales used in Southern India’s Ragas. The seven (of which only six were published) are the only ones he completed from a project of writing a gigantic cycle of 72, each in a separate mode. Each essay is strictly confined to the 7 notes of its particular mode, without modulation. The result is often subdued, poetic, terse, mysterious, somewhere between Satie, Scriabin and Debussy’s “Des Pas sur la Neige”, with whiffs of Copland’s Sonata. But some of them are more busy and agitated than that: the 4th Essay, “Military”, is an irresistible romp, the unpublished one, “Egoistic”, here placed in 6th position, is merry and triumphant and the last one, “Prismic”, is whimsical, dramatic and almost angry. Poulenc may faintly come to mind in some, and the last one also vaguely recalled the music of Dane Rudyar and Charles Tomlinson Griffes – composers most readers of this review will probably hardly have heard of anyway, let alone heard their piano music – but Foulds has a personality of his own. This is a fascinating cycle, lasting in all almost 29-minutes.

The short (3:30) Gandharva-Music is also quite fascinating. Apparently conceived in 1915 but not written down until 1926, it consists of unbarred repetitions of liquid ripples of notes in the piano nuance over an unchanging ground bass. It could be a modern version of some Bach choral-prelude, but it also announces the repetitive music of Glass and Adams.

The notes recount the anecdote by which composer Havergail Brian once asked a friend of his, an editor at the music publisher Novello, whether he had discovered any new talent comparable to Elgar. The friend responded with Foulds’ newly-published “Variazioni ed Imrovvisati”, his opus 4, written at 21, and his first work to be published. Now I can’t decide whether that response reveals a total lack of perception or a very keen intuition. The work has nothing special: it is written in the style of Schumann, Liszt or even the lesser late-19th Century Romantics (Tchaikovsky, Glinka maybe ?). Hard to perceive in it the seeds an original personality – the only original touch that I hear in the course of its overlong 17-minutes is a strange, ominous left-hand ostinato at 2:11 that goes on for about 40 seconds, apparently contradicting the sweet and sentimental right-hand melody – but maybe the editor friend did. Or maybe he misunderstood the question, thinking that Brian was asking for a new talent writing in the style of Elgar.

As for “English tune with Burden” (meaning “refrain”), possibly written in 1914, its main interest is that it served as a basis for Foulds’ third Aquarelle for String Quartet (recorded by the Endellion Quartet on the above-mentioned Pearl disc). The notes evoke a possible influence of Percy Grainger’s folk inspired piano trifles, and it is apt. Likewise, “April-England” (1926) was later (1932) extended into a lush orchestral piece, very Delian, with gloriously unfolding melodies (you’ll find it on the second of Oramo’s Warner discs), but it also works well as an autonomous piano piece, where the Bach Choral-Prelude overtones of its central section (1:45) are much more clearly in evidence.

I don’t have Kathryn Stott’s disc for comparison, but Jacobs seems more than competent. TT 63 minutes. The individual timings are not given on the disc’s covers or liner notes (but see my own pencilled scriblings on the backcover photo of my copy)