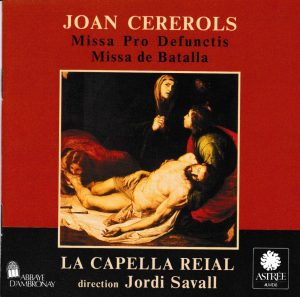 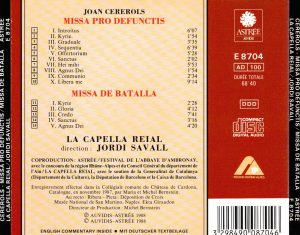 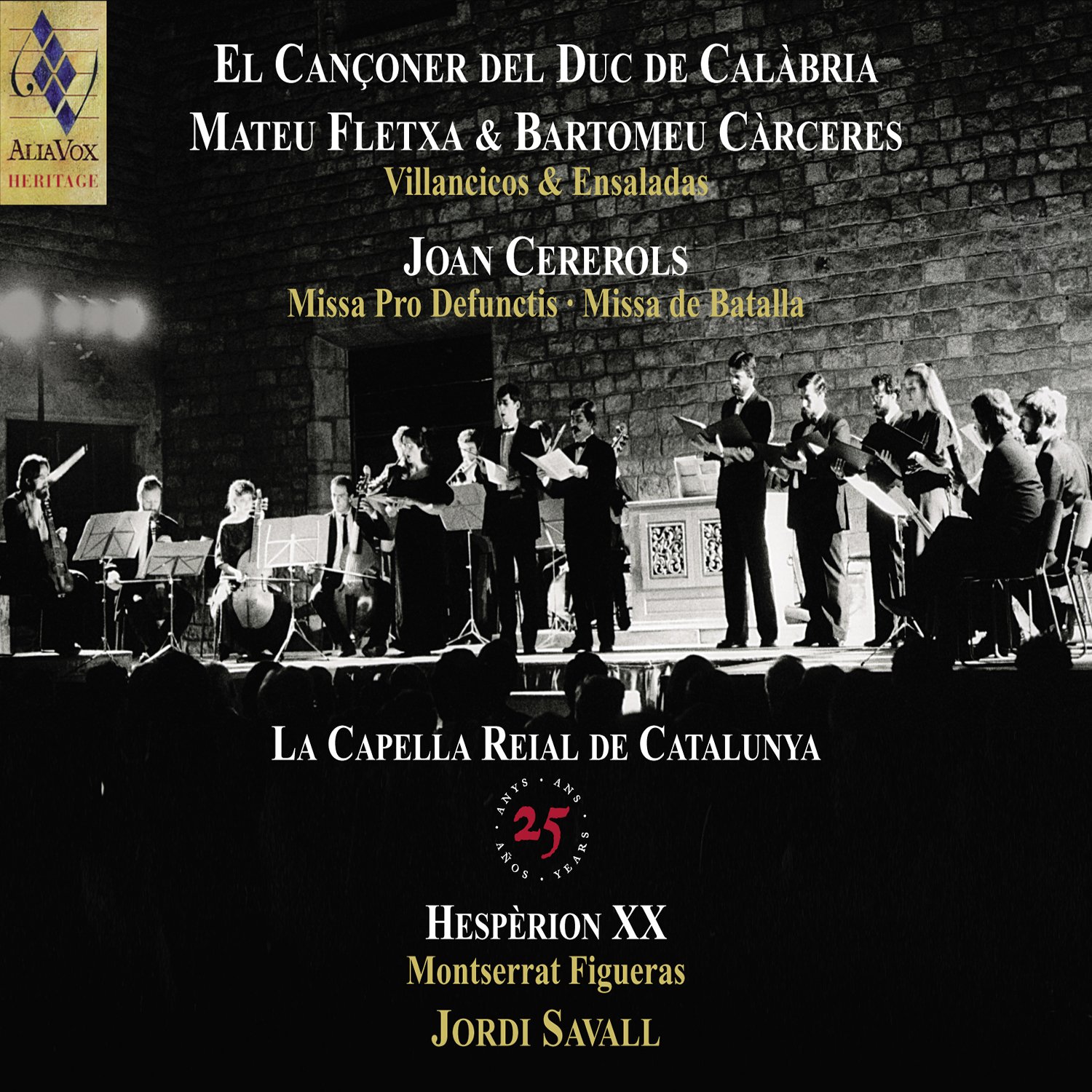 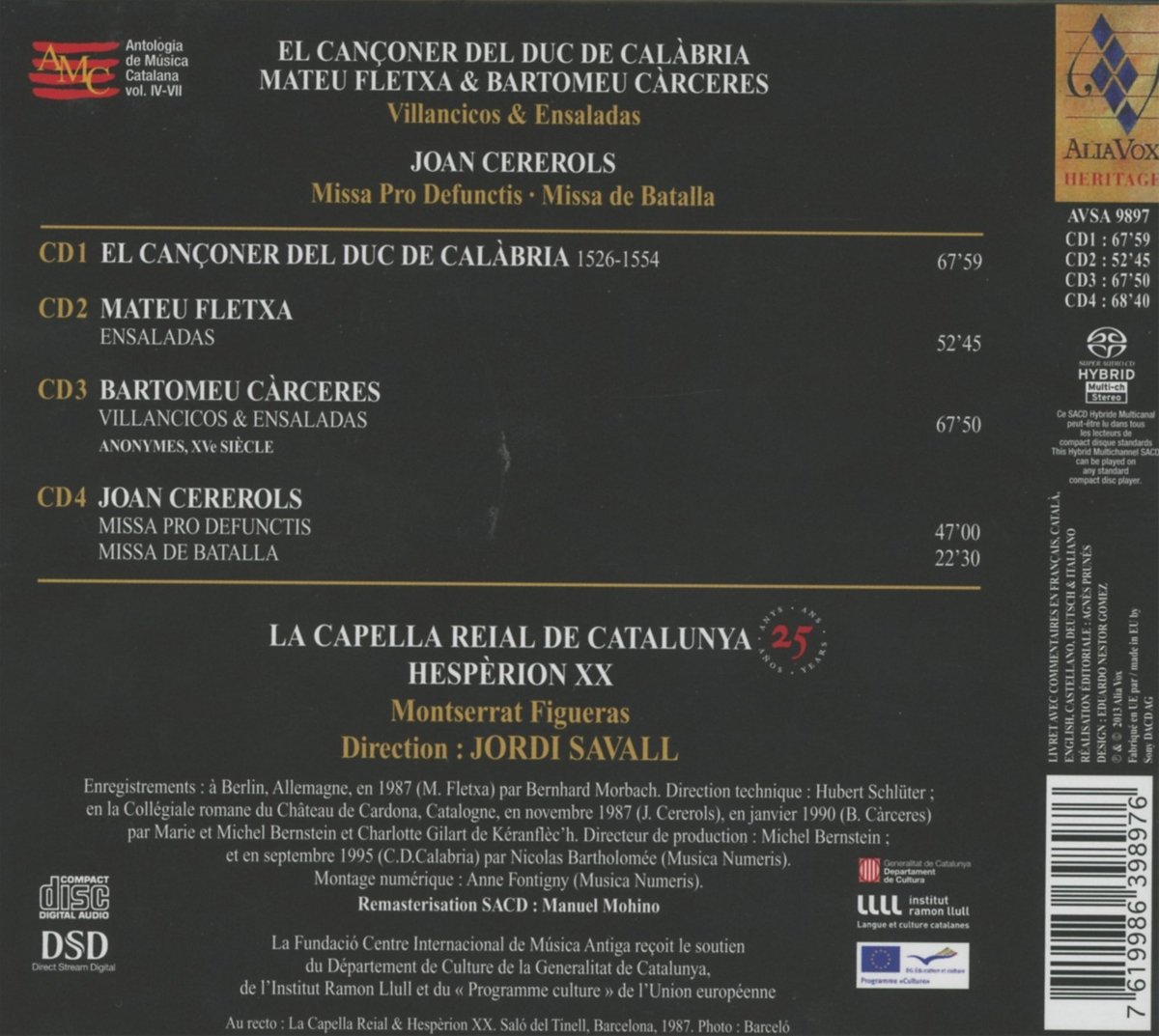 Recorded November 1987 in the Roman Collegiate Church of the Cardona Castle, Catalonia.

As befits the subject, Cererol’s Requiem is meditative, solemn and slow-moving. It is choral rather than soloistic, written for two choirs in dialog in the Italian Renaissance style, underpinned by brass, but the chorus here is attributed to solo voices, madrigal-like, which commendably lightens the textures, and the soloists include, of course, the stellar Montserrat Figueras, but also Maria Cristina Kiehr and Josep Cabré. It is interrupted by – and dialoguing with passages in plainchant sung by male chorus. The style is typical Renaissance transiting to early baroque: the Spaniard Joan Cererols, 1618-1680, a monk who spent much of his time at the Escolania (choir school) of Montserrat, was a contemporary of Cavalli (1602-1676), Carissimi (1605-1669), Cesti (1623-1669), and just to show that, no, I’m not chosing composers starting with a C on purpose, Schmelzer (1620 or 1623 – 1680). Much of what Savall and team play is conjecture – if I understand the liner notes, the scores come without instrumental accompaniment or with a simple continuo duplicating the vocal bass line, but it is known that the Monastery of Montserrat could dispose of many instrumentists, and Savall has conjectured that the scores are to be understood as mere sketches, each performing ensemble being free to arrange an accompaniment according to what instrumental resources they had at their disposal.

Given the constantly meditative and solemn atmosphere of the Missa Pro Defunctis, a touch of boredom may set in if you are not in the right mood, and the Missa de Batalla, with its radiant polyphony (three 4-part choirs) and upbeat mood, comes as a welcome contrast and a ray of light, with brass joined by an ensemble of viols. Astrée and Savall should have put the program in reverse order, really. In general, first comes the war (and the general enthusiasm when it is declared), then the Requiem.

Savall’s recording, when it was published in 1988, wasn’t exactly a rediscovery of Cererols. The distant heirs of the composer, Escolania & Capella de Música Montserrat under Ireneu Segarra, had been recording the music of Cererols since the late 1960s, first on the label Schwann, and committed both works to LP in 1978 and 1979 for Deutsche Harmonia Mundi, both compiled on a CD from 1988 on DHM’s mid-price series Editio Classica, CDM 7 69280 2, barcode 077776928029. But Savall sent back Segarra, with his funeral tempi even in Messa de Batalla, thick textures and sometimes precarious children’s voices, to prehistory.

Excellent and informative liner notes, heart-wrenching when the described how little has survived of the early manuscripts and other documentation that were once held at the Monastery of Montserrat, and destroyed during the Napoleonic wars.

We’ll never know if this is “authentic” Cererols as he may have been sung in Montserrat 350 years ago, but this is the Cererols we got, and it is as good a conjectural reconstruction as I can imagine. TT 69 minutes.

PS I had the curiosity to check on Wikipedia what and where was the “Cardona Castle” where the recording was made in 1987. Wow.