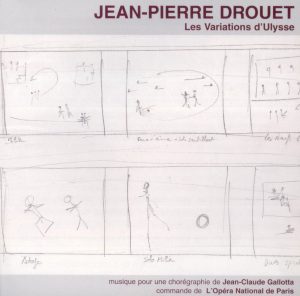 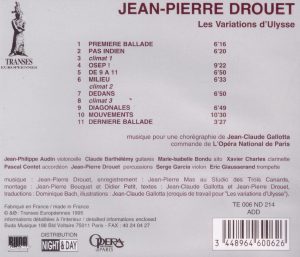 …If you like that kind of eclectic, entertaining, easy-listening crossover dance music
Originally posted on Amazon.com, 14 May 2016

Born in 1935, Jean-Pierre Drouet is first and foremost a French percussionist, closely associated with composers Stockhausen, Kagel, Xenakis and Aperghis, and performers Sylvio Gualda (percussion), Michel Portal (clarinet) and Vinko Globokar (trombone),  but he’s also a composer, especially of incidental music to various stage works or music for choreographies. Variations d’Ulysse is indeed the music he composed in 1995 for the ballet of French choreographer Jean-Claude Gallotta. The terse notes of Gallotta reproduced in the booklet are not clear at all about the chronology of the ballet when he states that the choreography was completed in 1981, and I had to go to French Wikipedia to understand it, “Ulysse (ballet)”. Ulysse was indeed premiered in 1981 and was considered a landmark piece in the “new French choreographic movement”, and Gallotta regularly returned to it: in 1993 (Ulysse, re-création), 1995 (Les Variations d’Ulysse) and 2007 (Cher Ulysse). Les Variations d’Ulysse was a commission from the Paris Opera and became part of the ballet’s repertory. Drouet was commissioned to compose a new music that had to closely follow the rhythms of the pre-existing choreography.

Gallotta describes Drouet’s music as “a post-Gipsy band that would have crossed the path of Igor Stravinsky, Miles Davis and all the drums in the world”. I’m not sure what a “post” Gipsy band exactly is, but yes, the description is pretty fitting, and to those influences and inspirations I would add:  the kind of world music typical of the Kronos Quartet, minimalism, Bartok’s folk style and the sardonic side of Shostakovich. In his own more extensive notes (only partially translated to English), Drouet says that he sought to pay homage to the dance music of the Mediterranean countries, Greece, the Middle East, North Africa, Spain, to the percussions of subsaharan Africa, Jazz. That’s exactly what you hear. The instrumental ensemble derives from the very project: string trio for classical music, clarinet and trumpet for classical and jazz (played by jazz musicians), flamenco guitar (played by jazz guitarist), accordion for popular dance music, percussion.

TT 66 minutes. ariations d’Ulysee may be for you If you like that kind of entertaining, easy-listening crossover eclecticism – or “cosmopolitism”, as Drouet himself describes it. Transes Européennes was a small French label founded by percussionist Pablo Cueco, with very rew releases. I’ve just reviewed two more from the same label, one of music for percussion and harp of Georges Aperghis, Triptyque, and the other, a 37-minute live impro for percussion of Drouet, Jean-Pierre Drouet Solo, very entertaining and possibly a better introduction to this composer/performer.