Not easy-listening, but challenging and ultimately rewarding
Originally posted on Amazon.com, 11 February 2013

Alexander Goehr‘s Violin Concerto, completed in 1962, is a very interesting composition, not easy listening but highly rewarding. The liner notes claim that its first movement is not serial/twelve tone, but it certainly sounds that way. In fact the (relatively short) movement is based on an unfinished series which finds its completion only in the next (twice as extended) movement. The Concerto sounds somewhat like the 2nd Concerto Schoenberg might have written, a quarter-century after his first. Like Schoenberg, it can be very lyrical, but it is a stern, atonal lyricism, not one that is romantic and heart-on-sleeve. In typical Schoenberg fashion, there is gossamer interplay between the soloist and the orchestra, the orchestral writing sounds always contrapuntal rather than chordal, and the powerful orchestral outbursts seem to proceed in spurts. The Concerto is packed with musical events, very dramatic in a rather enigmatic way (there are impressive climaxes but they don’t sound like they happen through a simple and predictable linear unfolding) and quite deft and subtle in construction, although that may not strike the casual listener. I’ve heard recently a number of Concertos from those years (late 1950s to mid-1970s) that, however enjoyable they may have been, sounded much more anonymous in their predictable musical dramaturgy, expression and style (see my reviews of 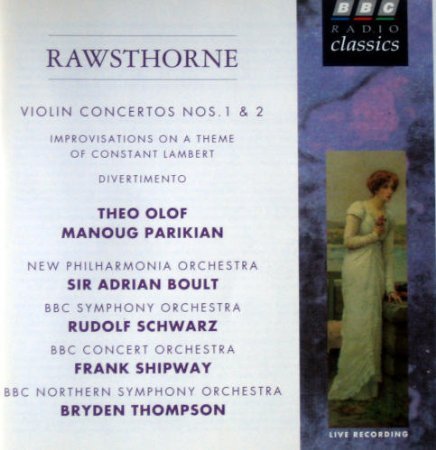 on BBC Radio Classics 15656 91952 – link will open new tab to my reviews on Amazon.com, pending transfer here). Hearing Goehr’s “Schoenberg VC# 2” came as a refreshing and rewarding change, although I recognize (and warn the reader) that this is probably for the cognoscenti, those who can hear “tunes” in the music of Schoenberg.

Iain Hamilton‘s Violin Concerto from 1952 is also a very enjoyable work, very lyrical in an anguished manner, tormented and dramatic, dynamic and uplifting in the finale (but still in a rather grim way), although it is written in a more anonymous, modernist but not avant-garde language similar to the concertos mentioned above – but still quite daring in post-war UK, dominated by the brahmsian and pastoral influences of Elgar and Vaughan Williams (Vaughan Williams wasn’t uniformly pastoral, of course). Manoug Parikian acquits himself stupendously well of these two difficult and virtuosic (both digitally and musically) works. Great 1971 sonics.

Before this disc I had never heard the name of Iain Hamilton, let alone his music (his representation on disc is very scarce). My loss. The Violin Concerto is more or less where he started, which is not bad, but then he discovered the music of Webern (again, not common in the UK in the 1950s) and moved on. Sinfonia for two orchestras from 1959 is a post-Webern, serial composition, and like Goehr’s Concerto, it is not an easy work, not “pretty” or “seductive” or “songful”, but it is finely whrought with a very elaborate, arch-like architecture, packed with instrumental events and undergoing moods that are alternately impressive and delicate. The recording is from 1966 and it is fine, despite a one-second drop-out that, reading from the Gramophone review (August 1966), was part of the original LP. Alexander Gibson and the Scottish National Orchestra had given the premiere seven years before, so they are the ideal interpreters. 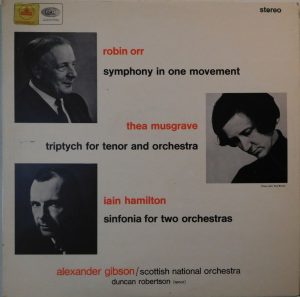 On the original LP the Sinfonia was paired with Orr’s Symphony and Thea Musgrave’s Triptych for tenor and orchestra; EMI has already reissued the former on a similar instalment of its great “British composers” series, 5 75789 2, paired with a fabulous reading of Simpson’s First Symphony by Adrian Boult, so I hope they will eventually bring back the lattter as well.

The liner notes are reproduced from the original LPs and they are outstanding. TT 68 minutes.