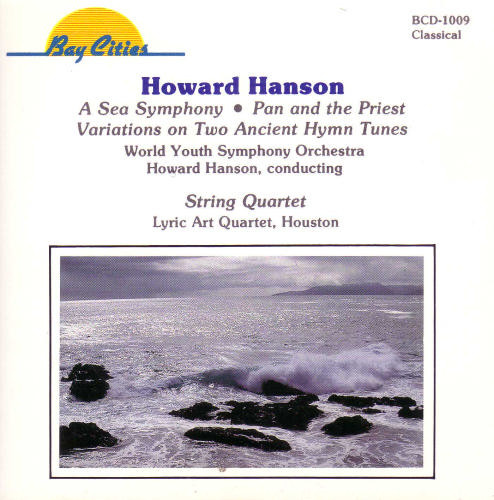 Hanson born too late in a world too old and torn
Originally posted on Amazon.com, 26 December 2007

Howard Hanson should have been born a Brit. There was more of a tradition and market in the UK for his kind of 20th Century arch-Romantic style of composing. His Sea Symphony (Symphony No. 7) on poems of Walt Whitman is another example of these choral symphonies of which Vaughan Williams’ is the prime example. It aims at the grandiose and doesn’t always avoid the bombast. In some fleeting moments (especially in its first movement, when the children’s voices are prominent) it also brings to mind Britten’s Spring Symphony, or Ceremony of Carols – but without Britten’s unique colors and personality.

But then, Vaughan Williams’ Sea Symphony was completed in 1909, Hanson’s is his last symphony and last major work, and dates from 1974. The symphonic poem “Pan and the Priest” is an early work, from 1926. Fittingly, it was premiered by the British conductor Sir Henry Wood. It is a lush Romantic thing which could have been written by Bax, Holst or Bridge. You may take this comment as praise, depending on your personal inclinations, but one doesn’t get the feeling that Hanson’s style evolved very much in the next fifty years, and it seems to me that such compositions, when written in the 1970s, cannot lay much claim on having anything essential to express to the world, other than an utter rejection of the way it changed. As well-crafted and enjoyable as these pieces may be, there is nothing there you haven’t heard before, and expressed more effectively too. The Rhythmic Variations on Two Ancient Hymn Tunes were written immediately after the Sea Symphony. They are plaintinve, elegiac and then hymnal in the manner of Cowell’s Hymn and Fuguing Tunes. If you wonder what the “Extented theme” the extended theme of is, it is the famous lyrical theme from Hanson’s famous “Romantic” Symphony. It used to be performed at the conclusion of all concerts at Hanson’s Interlochen Center for the Arts. Known as the “Interlochen Theme”, it was conducted by a student concertmaster after the conductor had left the stage, and there was to be no applause after its performance. It makes an appropriate valedictory statement, a farewell to a world too old and torn in which Hanson was born too late.

All these pieces are recorded here in good sound and in a live performance from 1977 (they were originally published on a semi-private Silver Crest NMC 1977-25 LP) by the so-called World Youth Symphony Orchestra of Interlochen, the youth orchestra gathered every summer at the Interlochen National Music Camp, Michigan. In fact the Symphony was written to commemorate the Camp’s 50th season and the Variations get here their premiere recording. A reviewer on Amazon.com of another Hanson-Interlochen release on Citadel CTD 88110 has reviled the orchestra’s reading of the Second Symphony and Merry Mount Suite (you will find that review on Amazon’s ASIN:B000003JVX page). I don’t have the scores but I hear nothing offensive here.

The String Quartet was recorded in 1989. It is an early work from 1923, which makes its passionate Romanticism more acceptable. The individual movements are not cued, but the finale, starting at 13:57, has nice Ravelian overtones and the Quartet has at times an intensity which announces Britten’s First Quartet. Compared to the recording made by the Kohon Quartet in 1974 and gathered on a fine VoxBox twofer, CDX 5090, “American String Quartets 1900-1950”, the Kohons aren’t quite as intense and passionate as the Lyric Art Quartet (although in some of the fast sections they are), but somehow I was more taken by the composition with them than when I heard the Bay Cities disc, maybe because it comes there in the context of other String Quartets of varying styles rather than of Hanson’s clichéd neo-romanticism.

In sum, this disc should provide enjoyment to those who can never have enough of Vaughan Williams, especially his Sea Symphony. Now that the short-lived label Bay Cities is hard to come by, this program has been reissued in 1996 on Citadel CTD 88116, barcode 795818811626,  without the String Quartet (now on Citadel CTD 88119 with the Quartets of Randall Thompson, a more logical coupling anyway, barcode