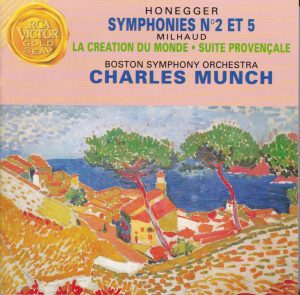 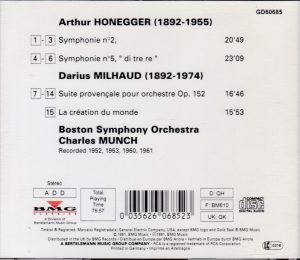 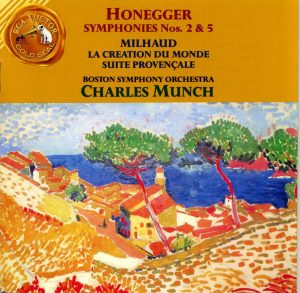 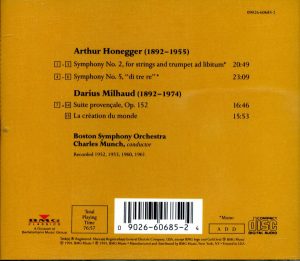 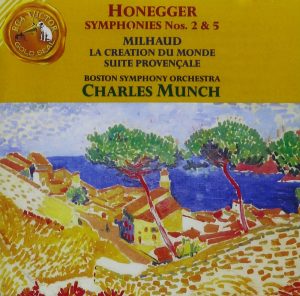 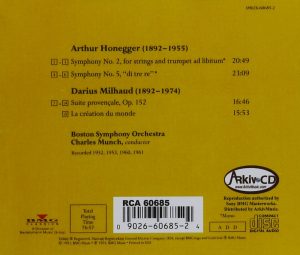 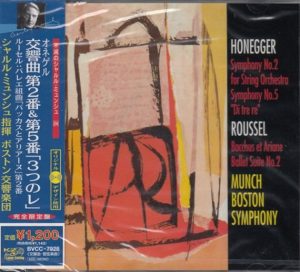 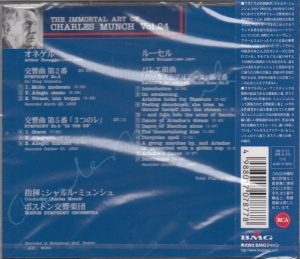 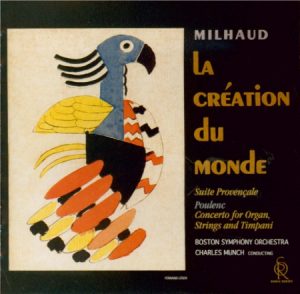 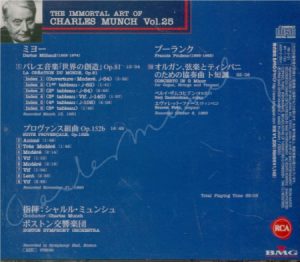 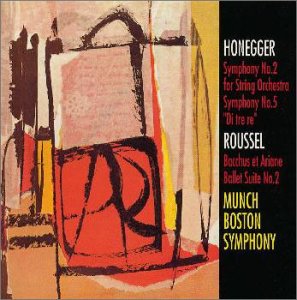 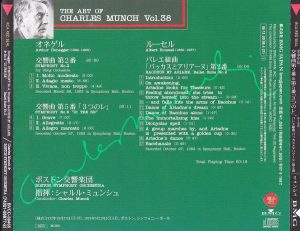 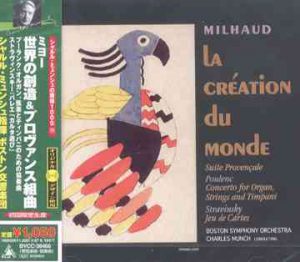 Munch was, with Ernest Ansermet, Paul Sacher and George Tzipine, one of the early champions of Honegger, and he championned no composition more than the second Symphony, as far as number of recordings can attest: three in the studio (the first one with Orchestre de la Société des Concerts du Conservatoire from 1942-44, recorded shortly after the composition’s premiere under the baton of commissioner Paul Sacher, this one with the Boston Symphony Orchestra from March 1953, and the last with Orchestre de Paris in December 1967), to which the CD era has added two lives that have come my way (Czech Philharmonic Orchestra 17 May 1957 on Multisonic 31 0022-2 with Milhaud : Music for Prague & Symphony 10,  and Orchestre National 1 September 1964 on Disques Montaigne MUN 2051, reissued on Valois V-4831) – but the great online discographies of Munch by Benoît Duhoux and Sylvain Gasser show that there are more.

If only for sonic reasons the 1967-Orchestre de Paris version would be the one to prefer, and it is a great one too, despite a Finale that is not the most animated and biting ever conducted by Munch. But the Boston mono sonics are great too for their vintage, so spacious that they could almost be confused for stereo. And in fact, the interesting point in comparing Munch’s five versions is that they are all different, with the later ones sometimes combining the approaches of the earlier ones. In his first, war-time recording, Munch favored a spacious and brooding opening tempo (notated “molto moderato” by Honegger), a few beats under the composer’s metronome mark, an approach that later became the norm, as shown by the recordings of Baudo (1960, the first installment in his complete recording with the Czech Philharmonic on Supraphon), Ansermet (Decca 1961),  or Karajan (DG, recorded in 1969, released only in 1973). But, by way of paradox, in all his subsequent versions from the 1950s and 1960s Munch took a much more urgent opening (and quite unique in doing so), lending the music an un-emulated sense of inquietude. And what all of Munch’s versions shared (but the first one to a lesser extent only) was the great bite and urgency of the Allegro section proper (starting here at 1:46), and none of his studio versions have more raging bite than Boston (there is even a touch more live with the Czech Philharmonic in 1957 on Multisonic, but in far inferior sonics). The same urgency of pacing of the slow movement was also always an abiding characteristic of Munch’s approach and there too a distinctive feature of his interpretation, all the other versions that I’ve heard favoring a more brooding and mourning mood, the most extreme here (and quite beautiful in his own way) being, it’ll come as no surprise, Karajan. But Munch’s approach is also entirely valid and convincing in its own right, turning the music not into a mourning dirge but into a cry of revolt or perhaps into the omen of impending doom. Among Munch’s five versions, Boston is one of the most urgent (the live one with Orchestre National on Montaigne is a touch more) and possibly the most intense, and the last one with Orchestre de Paris is the most spacious (all things being relative, it is still more urgent than anyone else’s) but there the great stereo sonics and deeply-felt phrasings of the solo cello also lend it unique pathos. In the Finale, Boston is THE most breathlessly urgent of all those recorded by the conductor, live ones included, and the trumpet soars triumphantly at 3:49. This Second remains today an important document, and not just for its historical significance.

Munch also had unique legitimacy in the 5th Symphony, as the composition’s premiere performer on 9 March 1951, and this recording was made not long after, on 27 October 1952. It is very true to score and the composer’s tempo indications, intense in the build-up to the first movement’s climax from circa 3:25 to 4:42 with its tight and menacing trumpet calls, remarkably detailed orchestrally, with biting and snarling brass in the finale, and sounding much better sonically than Markevitch’s 1957 recording with Orchestre Lamoureux for DG (paired with Milhaud: Les Choéphores and Roussel: Bacchus et Ariane-Suite No. 2 on DG “The Originals”), to the point that you’d easily think the chronology had been inverted. But, as great and indispensable as this premiere recording is, live in 1964 with a less tidy and sonically more congested Orchestre National in the tutti (on Disques Montaigne, see link above), Munch generated even more high-strung intensity, thanks to more urgent tempos in all three movements, more breathless accelerations in the climaxes, more sardonic bite in the second movement (a combination of Scherzo and slow movement).

I’ll limit for the time being my comments to Honegger, except for mentioning that the two Milhaud pieces, among his most popular and joyous (but to my ears lighter fare) were recorded in great 1960 and 1961 stereo. To me, they are bonus to the historical Honegger.