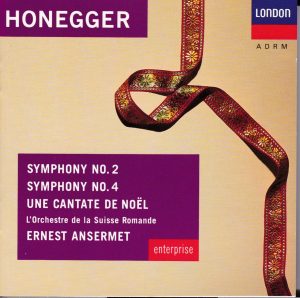 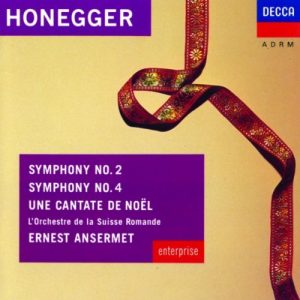 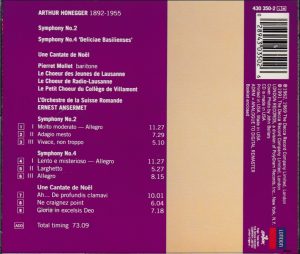 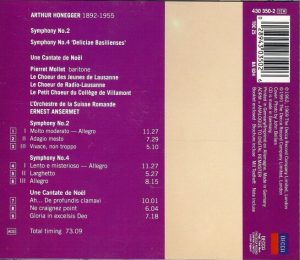 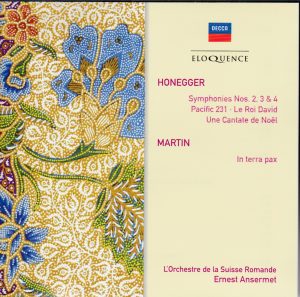 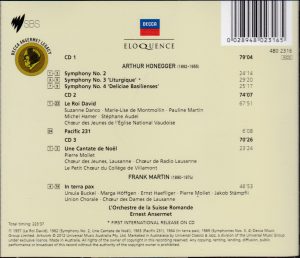 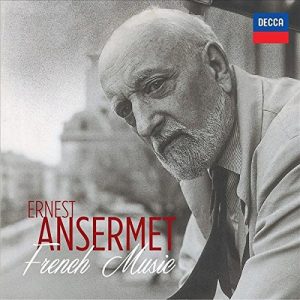 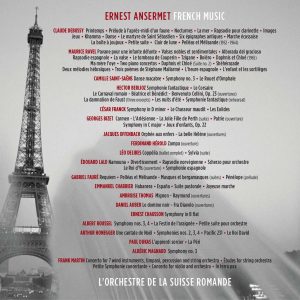 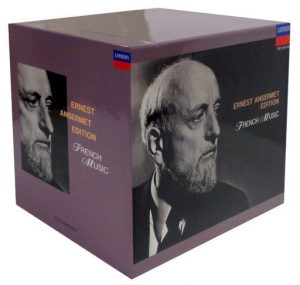 Still today one of the best versions of the Christmas Cantata
Originally posted on Amazon.com, 28 July 2013

Ansermet was, with Munch, Scherchen, Paul Sacher and, in the early 1950s, Georges Tzipine, one of the staunch early champions of Honegger (and in that shortlist Koussevitzky should also be included, but alas he has left no recorded testimony of it). Although premiered by Koussevitzky, Pacific 231 is dedicated to Ansermet, and he premiered “Chant de Joie“, “Horace Victorieux“, “Rugby” and the 1948 “Prelude, Fugue and Postlude“. Already before World War II, in the 78rpm era, he recorded “Pastorale d’été” (1934 or 1942, sources differ) and short selections from King David (1929). He also made a first recording of Pacific 231 in 1955, still in the mono LP era, with Orchestre de la Société des Concerts du Conservatoire. But it is really in the stereo days and with Orchestre de la Suisse Romande that he was finally able to commit (some of) his interpretations of Honegger, the complete King David in 1956, Symphony No. 2 and Christmas Cantata in November 1961, Symphonies 3 & 4 in September 1968. The latter were among his last recordings, followed only by Alberic Magnard’s Third Symphony and Edouard Lalo’s Scherzo (21-24 September), and Stravinsky’s Firebird in November, with the New Philharmonia Orchestra: the conductor passed away on February 20, 1969 at the age of 85.

Still today, more than 50 years after it was recorded, Ansermet’s Christmas Cantata remains, arguably, the best version. It benefits from the great 1961 sonics, a powerful chorus (so much so that many instrumental details get covered, but it is not so essential), a sure sense of tempi (very close to Honegger’s metronome indications) and wonderfully energetic pacing when needed (nobody has filled the “laudate dominum omnes gentes” chorus/chorale near the end, track 9 at 1:59, with so much triumphant jubilation), and above all, from the contribution of baritone Pierre Mollet. Many versions fail on the baritone, because of impossible foreign accent, lachrymose characterisation, ungainly timbre. But no one, even Camille Maurane (recorded too late in his career with Jean Martinon in 1971 for EMI) or Gilles Cachemaille with Michel Corboz in 1989 (Erato, with La Danse des Morts), attains the tenderness and nobility of Mollet… not even Mollet, recorded in 1954 with Georges Tzipine and Orchestre de la Société des Concerts du Conservatoire, in uncompetitive mono sound and without the same hushed tenderness (now on Les Rarissimes de Arthur Honegger): with Ansermet, it is Pelleas singing the coming of the Child Jesus. More exceptionable is that Ansermet attributes the line “Laudate dominum omnes gentes”, track 9 at 0:22, not to a solo child voice as written but to the full children’s chorus, singing softly and from a distance: it is effective that way too, but not as touching as when it is a single voice, but it is only one bar. Ansermet also doesn’t observe Honegger’s instruction for the chorus to play “doppio movimento” on the orchestral bridge passage, track 7 at 6:53, he keeps them at the same tempo as before. Again, not that it matters very much: it is even more effective that way, bringing formidable grandeur to these four bars. There have been subsequent versions that let you hear more orchestral details (Martin Neary in 1987 with chamber choir and orchestra on EMI), Thierry Fischer in 2007 on Hyperion, Vladimir Jurowski in 2009 (on the London Philharmonic Orchestra’s house label) but their baritones aren’t as satisfying as Mollet, and their final chorus isn’t as jubilant as Ansermet’s.

But the original companion of A Christmas Cantata on LP, the 2nd Symphony for Strings, is the disappointment of this CD. Despite, again, its great stereo sonics, it fails on its first movement. Ansermet strays from the urgent model established by Munch in Boston in 1953 (RCA GD60685 with Symphony No. 5 and Milhaud’s La Creation du monde and Suite Provencale), by taking a very brooding “molto moderato” opening, slower than Honegger’s metronome indication, as Munch himself had done in his premiere recording from 1942-44 with Orchestre de la Société des Conserts du Conservatoire, as Baudo had followed the year before Ansermet’s recording (on the first installment of his complete traversal of the symphonies with the Czech Philharmonic on Supraphon),  and as Karajan would a few years later, and to very beautiful effect. But where Munch 1 and Baudo, when came the first Allegro, established a strong contrast between the brooding and the biting (Karajan here let some heaviness and thickness in his bass underpinning rob his reading of some of that bite), Ansermet doesn’t: he keeps things very slow-paced, and the slow pace is not relieved by any added crispness and bite of articulation (as Rozhdestvensky did in 1986, on Olympia OCD 212 / Melodiya MCD 212), he keeps the textures thick, conveying an impression of sluggishness. His slow movement is better, its main characteristic being the conductor’s flexibility of tempo, the way he animates the music at 2:44, not remaining throughout in the dirge-like atmosphere of the beginning but bringing it more bite and a sense of revolt, as Munch did. I’m not convinced that it is the solo cello (as Honegger instructs) that plays at 5:37 and again at 6:39, rather than a small group of cellists. The Finale also isn’t rushed (and the tempo is kept rock steady at 3:37 where Honegger instructs an acceleration to “Presto”), but at least here the conductor brings it a fine robustness and crispness of articulation. But the big rallentando on the final descending sixteenth-notes was not absolutely necessary – in fact, it was a very bad idea, it thickens and burdens the final coup rather than make it jubilant.

Fortunately the Fourth Symphony from 1968 is excellent, standing out not only for its clear and detailed sonics, lending fine character to woodwinds and brass and letting you hear reasonably well the different strands of Honegger’s orchestration in the first movement, although there are spots where I find that the woodwinds still don’t stand out enough: to make full musical sense of the movement it is fundamental to hear the circulation of the melody and counter-melodies between the different orchestral sections, and between the different instruments within a section, especially those woodwinds. But even more important, Ansermet is the only version among all those I’ve heard (not that there have been so many recordings) that scrupulously respects Honegger’s metronome indications, in all three movements. That might be a bit TOO literal in the “lento” opening of the first movement, taken at a flowing pace that robs it of some of its “…e misterioso” atmosphere. But, although like everybody else he tends to equate diminuendo and rallentando, Ansermet is one of the rare versions to observe, and the one that lets you best sense, Honegger’s two tempi in the Allegro proper, the opening “fast” and the slight relaxation of it that occurs at various points (for instance at 3:03, or 7:10). The two other Honegger champions, Tzipine and Munch, do not observe these subtle tempo relationships, and, to limit myself to those who recorded the complete symphonies, neither do Baudo (see link above), Plasson (EMI), Dutoit (Erato), or Luisi (Cascavelle).

Tzipine, Munch and almost everybody I’ve heard takes the middle “Larghetto” slower than Honegger’s metronome, highlighting its character of a burdened funeral march – and no one more radically than Munch. No complaint: it is very effective that way. But there is a value also in taking it, as Ansermet, at the composer’s tempo, refusing to milk it and always maintaining the flow, not letting the music get bogged down under its own weight, and lending it an almost menacing character. The Suisse Romande violins are more passionate than tender. In the nasty, quasi “Sorcerer’s Apprentice” dance which constitutes the Finale, it is interesting to note again that those two great Honegger champions, Munch and Ansermet, are on the opposite interpretive poles: Munch urgent, Ansermet deliberate (as the composer instructs). And don’t be fooled by the overall timing, of 8:12 for Ansermet vs 8:26 for Munch: it is because Munch takes the two “Adagio” sections (for which the composer, for once, provided no metronome indication) much slower than Ansermet. Both approaches are legitimate and effective. I have a small preference for Ansermet’s, and not just because it is more observant of the composer’s wishes, but also because it conveys a greater sense of implacability.

Ansermet’s stereo Honegger has finally been reissued complete by the invaluable Australian Eloquence (adding the Third Symphony “Liturgique” and “Pacific 231” to the two CDs already reissued on Decca Entreprise in the early 1990s), with the substantial bonus of Frank Martin’s oratorio In Terra Pax. But this earlier reissue retains its appeal for those who’d want only the Christmas Cantata. TT 73 minutes, text and English translation of the Christmas Cantata included, which is not the case with the Eloquence reissue.