Recorded May and December 1993 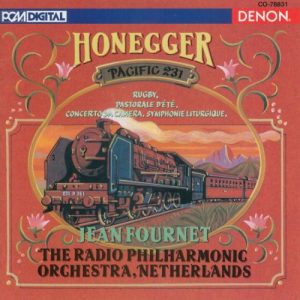 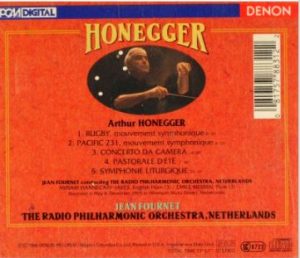 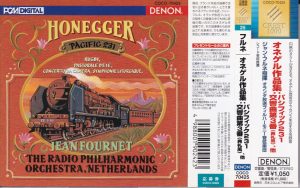 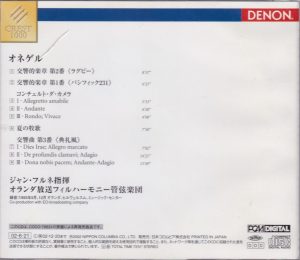 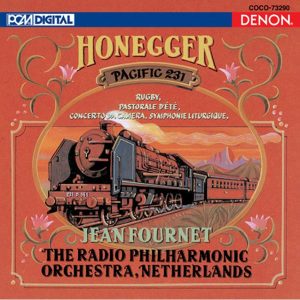 (and if you don’t know what a Blu-spec CD is, see Wikipedia)

A “Liturgique” with a major difference
Originally posted on Amazon.com, 1 July 2013

Despite being, when the recording was made in 1993, one of the grand old masters among French conductors and one of the last representatives of a generation that came of age (just before world war II) when Honegger was very much the dominating figure of the French compositional scene, Jean Fournet (1913-2008) isn’t associated with the composer, unlike the early champions Serge Koussevitzky (1874-1951), Charles Munch (1891-1968), Louis Fourestier (1892-1976), Paul Sacher (1906-1999) or Georges Tzipine (1907-1987). He’s not mentioned once in the great biography of Honegger by Harry Halbreich (original French edition 1992 Editions Fayard, ISBN 2-213-02837-0, English translation Amadeus Press, 2003, ISBN-10: 1574670417), and I’m not aware that he recorded any Honegger before this Denon disc. Whatever his familiarity with the music and style of Honegger, you’d think also that an 80-year old conductor wouldn’t have the energy and drive to fully convey the tension, bite, motoric energy and even rage of compositions like Rugby, Pacific 231 and even more Symphonie “Liturgique”, Honegger’s cry of revolt against the triumph of human stupidity and self-destruction.

In part, this appears true. Fournet’s Rugby is the most sluggish performance I’ve ever heard – and by a wide margin. Compare his 8:35 to the composer‘s 7:10 (in 1930, reissued on Music & Arts), Hermann Scherchen‘s 7:03 (1954, Westminster), Bernstein‘s 7:20 (1962, reissued on Sony’s Masterworks Heritage MHK 62352 or  Sony’s “Bernstein Century” SMK 60695 “20th-Century French Masterpieces”) and even, now that a more expansive interpretive paradigm has set in, to Plasson‘s 7:50, the slowest hitherto encountered. It is the Honeggerian critic of the 1940s and 1950s José Bruyr who cunningly remarked that in the subtitle “Mouvement symphonique” (Honegger famously wrote three, “Pacific 231“, “Rugby” and “Mouvement Symphonique No. 3“), the first term should be construed in the first sense: “motion”. Fournet’s rugby players seem to have their feet mired in thick, heavy mud, or maybe they are Sumo wrestlers playing rugby for relaxing. You don’t need to interpret Rugby in the terms Honegger himself exposed – the depiction in music less of an actual rugby match than of the energy and conflict of a rugby match – and I see it more as “pure music”, an almost abstract Concerto for orchestra or ballet in miniature, the closest Honegger would ever get to Stravinsky’s neo-classical ballets and symphonies. Fournet’s elephantine tempo allows you to hear with great clarity all the orchestral details and within the limitations of his pacing his players certainly articulate with great crispness, but it doesn’t make up for the lack of sparkle and propulsion.

Fournet’s Pacific 231 is much better and benefits first from its great sonics, lending it much impact, with every strand of Honegger’s dense orchestration coming out, and reaching epic grandeur in the final section when the mighty horn them erupts at 4:48. It too lacks the essential element of propulsion and speed which the two premiere recordings, by Piero Coppola in 1927 (reissued in 1998 on Dante Lys 373) and the composer himself in 1930 (see link aboveto the Music & Arts edition), so evidently invested it with, and Bernstein still in 1962 (see above), but Fournet shares this interpretive feature with ALL modern versions subsequent to Bernstein’s and Baudo’s: unlike the three above-mentioned, all have let gravity and friction get the better hand over the mighty forces of mechanical traction, and Fournet is far from the most deliberate (that would be Jean Martinon).

But that those expansive to sluggish tempos are a matter of interpretive choice and not of age is shown by Fournet’s “Liturgique“. His tempo in the first movement, “Dies Irae”, may not be as relentlessly urgent as (by chronological order rather than hierarchy of speed) Munch‘s (live with the Boston Symphony Orchestra on tour in Prague in 1956, published in 1990 by Multisonic), Baudo‘s (1960, Supraphon), Mravinsky‘s (1965, Melodiya), Plasson‘s (1977, EMI), Järvi‘s (1992, Chandos) or Jansons (1993, EMI). In fact it comes within seconds of Karajan‘s (1969, DG), illustrating a more expansive view. But it doesn’t miss an iota of breathtaking tension, thanks to the formidable vividness of the sonics, the biting anger of the brass. Music lovers love to make hierarchies, with the handful of top-tier orchestras and the throng of second or third-leaguers, but I’d like for someone to tell me (with facts, please!) the difference between the “Radio Philharmonic Orchestra, Netherlands” and a major orchestra: I don’t hear it.

Again it is remarkable how close Fournet is to Karajan in his choice of tempo in the second movement, making you think that this is where he “learned” his Honegger. Karajan was remarkable for his very broad and expansive tempo, way under the composer’s metronome indication and even to the composer’s slower tempo in his circa 1948 recording (see Music & Arts above), eliciting (in my imagination) the impression of the slow unfolding of a majestic river. Again Fournet is within seconds, and the impression is remarkably close. There is slightly less orchestral presence and vividness with Fournet, but impressive climaxes nonetheless. For the anecdote, Fabio Luisi, in his recording of the complete symphonies made for the Swiss Radio in 1999, exploded the “record” of Karajan and Fournet conducting a slow movement longer by more than a minute.

But then comes the Finale, and if the first two movements followed the Karajan model almost to a fault, Fournet’s Finale is really something else. The historical perspective helps understand what and why. In the composer’s own words the nasty and ominous march that opens the movement is supposed to depict “…the implacable rise of man’s enslavement, of the total loss of his freedom … the rise of collective stupidity… the march of the robots against civilized man, holder of a body and a soul… The revenge of the beast against the spirit… the imbecile march of a long flock of mechanical geese waddling in rhythm…” Honegger’s score bears a metronome indication of 88 quarter notes per minute, which is a very deliberate tempo. In his own recording, the composer doesn’t follow his own instruction, and paces it faster at circa 100. His biographer Harry Halbreich mentions a manuscript performance note in which Honegger suggests a tempo of 112, and most versions have followed that lead:

Georges Tzipine in 1954 (a fine recording, made under the composer’s supervision, lamentably not reissued on CD) with a tempo of circa 107 and Järvi adopting the same in 1992, Baudo at circa 110, Munch at circa 112, and Mravinsky the fastest of all for almost a quarter century at circa 116, one-upped by Jansons in 1993 at a phenomenal and breathless 124. In that group, Karajan was almost one of a kind, with a beat spot on Honegger’s metronome. There had been an earlier and forgotten version, by Robert Denzler, in 1955 for Decca, that did the same (it had been dubbed to CD from the LP by the French label Forgotten Records, and has finally been reissued in 2015 on Decca’s mammoth 53-CD set 478 7946 “The Decca Sound – The Mono Years 1944-1956”, barcode 028947879466), and in 1968 Ernest Ansermet also went back in the direction of Honegger’s score indication, but only to an extent, with a tempo of circa 96. With Karajan the result was great and proved that the composer’s original conception was entirely valid, bringing a sense of forbidding implacability absent from the others.

Fournet? As phenomenal, on the opposite pole, as Jansons: 70 beats/minute. This is almost twice as slow as Jansons. I don’t think even Klemperer near the end would have taken it so slow. There have been numerous examples that the same printed notes could lend themselves to such an abyss of interpretive difference – just compare Scherchen’s Beethoven Eroica to Klemperer’s or Barbirolli’s – and it is always exciting and fun to discover one more. Beyond that objective observation, subjective reaction and judgment will rest of course on each listener. Fournet’s very extremism certainly rules it out as a first choice, and who would know the Liturgique only through this recording would certainly have a very distorted view of it. Still, I find that Fournet’s attempt works to remarkable effect. And it’s not just a matter of tempo, mind you: it goes hand in hand with the great vividness and instrumental impact. Certainly, the nature of the music is changed radically, but what Fournet turns it into is entirely defensible: no more Jansons’ or Mravinsky’s race to the abyss of self-destruction (recalling Faust’s ride with Mephisto at the end of Berlioz’ Damnation), no more Karajan’s implacable and irrepressible march towards doom – but a slow, despaired, burdened Funeral march of awesome power – a distant heir to the fourth movement, “Marche au supplice”, of the Symphonie Fantastique. Obviously not what Honegger had in mind, but very true to his message, a creative distortion, provocative, highly disputable, but in its own way “génial”, a the French say, and, if you are a serious Honegger collector, one definitely to have in your collection, with Jansons (and, of course, Mravinsky’s and Karajan’s, and add Järvi and Münch).

Instead of the expected Mouvement Symphonique No. 3 (the third pendant of the triptych also represented by Pacific and Rugby), Fournet offers the late Concerto da Camera for flute and English horn (1948), and a fine version too, more natural in its sonic perspective than Arturo Tamayo‘s on Timpani and more gentle in its rare orchestral outbursts (it is a string orchestra) than both Tamayo and Gerard Schwarz on Nonesuch, which suits the pastoral nature of the music well. I appreciate also Fournet’s flowing and unsentimental tempo in the slow movement (and Honegger did write “andante”, not “adagio”). His Finale is NOT taken at the “Vivace” indicated by Honegger, more an Allegro moderato, and the flute part looses its virtuosic and wildly chirping character, but there again it isn’t entirely contradictory with the pastoral and gentle nature of the music. I have Denon’s Crest 1000 reissue from 2002 and I can find nowhere the two soloists listed, and no online scan of the other editions that are legible enough to find them. It is finally the website of Editions Durand-Salabert-Eschig, who now holds the rights to Honegger’s scores, that provided their names (see heading).

With all that, it is surprising that Fournet doesn’t conduct a more expansive “Pastorale d’été“. In fact he is very middle-of-the-road, mid-way between the pressing and unatmospheric Honegger, Martinon or Vasary (Chandos) and the very broad Scherchen (Westminster, link above), Munch (live with Orchestre National in 1962, Disques Montaigne), Baudo (link above), Zinman, Plasson (link above) and Luisi (link above), and yet he offers a very atmospheric rendition.

But it is really for Fournet’s Liturgique and its Finale that every serious Honegger fan must hear this disc. It is really something else.