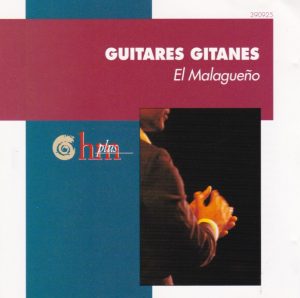 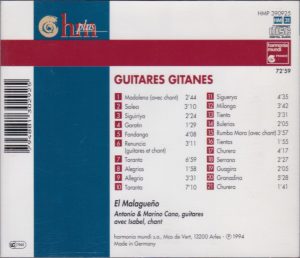 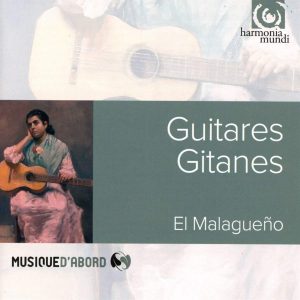 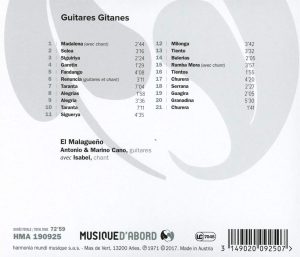 Exploring the (huge) catalog of Harmonia Mundi, I chanced upon this one. It sold cheap and I bought it. I’ve been able to retrace its sources: 16 tracks come from Harmonia Mundi LP HM or HMU 925 (link will open new tab to page at Discogs.com) 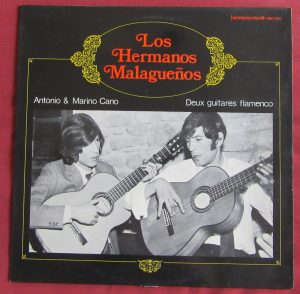 The CD credits “Antonio & Marino Cano” as the guitar players (and just “Isabel” as vocalist – but a later budget LP reissue is attributed to “Antonio & Isabel Cano”), but in fact it’s not entirely clear who plays and it wasn’t clear on the original HM/HMU 925 original LP either. What is established is that Antonio and Marino were the two guitarists on HM/HMU 935. 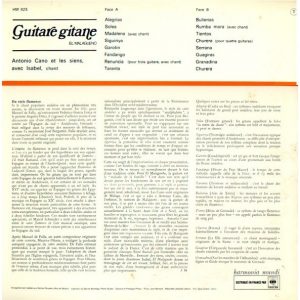 But 925 just stated “Antonio Cano et les siens” (e.g. “and his kin”) – with already “Isabel, chant”.  How many supporting guitars in which tracks was not specified. Information from iTunes mentions that some tracks are played with three (track 6, in which “Isabel” joins) and even four (track 17) guitars – but based on whose authority, I don’t know. Playing by ear, except the tracks indicated by iTunes (and add track, 15, “Rumba mora”, another one featuring Isabel) and those from LP 535, it’s all solo, but sometimes it’s hard to tell.

I’m no specialist of flamenco and thus not qualified to give an informed opinion on the flamenco “authenticity” and value of the recital. True connoisseurs are very picky about those attributions and, for instance, staunchly deny to Manitas de Plata the honor of being an authentic “flamenco” guitarist. So be it, and I accept that. The only thing I can say is that, authentic or not, I found it very enjoyable, everything the non-connoisseur expects from a flamenco (or simply “Spanish Guitar”) recital. While unmistakably “Spanish”, the compositions seem to me to eschew the usual formulas and display much imagination – they are more nostalgic and evocative than “Ole Ole”.  And, as always when it happens, I love the bird-chirping that you can faintly hear in the distance on some tracks (track 7 for instance). Only three tracks are sung, 1, 6 and 15. I enjoyed these tracks: “Isabel” has the somewhat un-refined and slightly old-sounding voice you expect of a flamenco singer – but not quite as raucous as some either. TT 73 minutes.

I haven’t found any info online about Antonio Cano’s biography. There was a noted Spanish guitar player and composer called Antonio Cano, but that was in the 19th century (see his Spanish Wikipedia entry). There was also a Spanish dancer of the same name who collaborated with choreographer Maurice Béjart from the late 1940s to late 1960s – but no indication that he was also a proficient flamenco guitarist. There was a famous flamenco guitarist who went by the nickname of El Malagueño – but that was someone else: Manolo El Malagueño (Manuel Pendón Rodríguez was his real name – link to Spanish Wikipedia again). But, other than listings of his recordings with Harmonia Mundi, nothing on Antonio Cano the flamenco guitar player of the 1970s. The only thing I know about him is what I can decipher from the bad cover photo posted online (and reproduced here above) of the original LP: that he was born in Málagua (that I had figured out), that he learned to play the guitar in family, that he played in France’s Saintes Maries de la Mer, in the Camargues region (as did Manitas de Plata), and that’s about it. Who was this guy, when was he born, what happened to him thereafter? I guess he didn’t leave his mark on the world of flamenco, but there’s a riddle there.