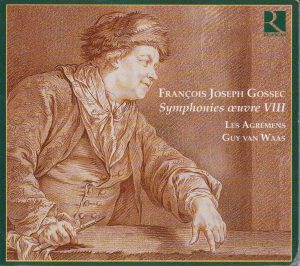 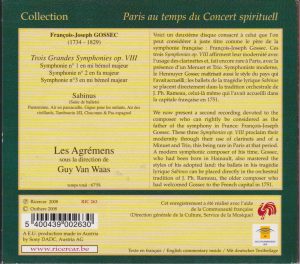 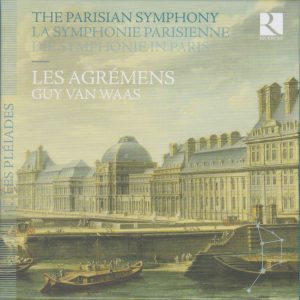 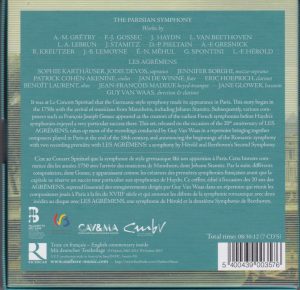 Gossec hasn’t made it yet to public recognition. If assessed after the number of recordings, his Mass for the Dead (Missa Pro Defunctis, often dubbed Requiem), an early composition from 1760 (but revised for its publication in 1780) is his most popular work, with five recordings since the early 1980s (see my Gossec composer page for the links to the recordings). Rightly so: it is a masterpiece, equal in my opinion to the best vocal/choral compositions of Mozart and Haydn (but composed decades earlier) and announcing in many aspects the Requiems of Berlioz, Verdi and Fauré.

But the symphonies haven’t been so popular with record companies. Even Naxos, which seems to have embarked on doing complete recordings of just about every symphony written in the second half of the 18th Century, hasn’t even begun to tackle Gossec’s output in the genre. Gossec composed circa 70. By my count, a little over 20 have been recorded. His first collection, six symphonies op. 3, was published in 1756, and that is at least a year before Haydn’s own first (scholars dispute which one exactly was Haydn’s first, possibly not the one published as Number one). Gossec’s last was the Symphonie à 17 parties, in 1809. Only the latter has enjoyed a modicum of recorded circulation, with at least four recordings that I am aware of (but only one that’s really worth listening, by Concerto Köln – see again my Gossec composer page). Other than its intriguing title and its position in Gossec’s symphonic output, I hear nothing in it that justifies that favor, and I don’t find that it towers significantly above the rest of Gossec’s symphonic output.

Anyway, it is great news that the Belgians Guy Van Waas, the period-instrument ensemble Les Agrémens and the label Ricercar should apparently be devoting their efforts to Gossec, and doing it, apparently, in a systematic manner, by opus number rather than through miscellaneous collections of symphonies like Mathias Bamert on Chandos, Stefan Sanderling on ASV (two volumes) or Concerto Köln. Other than this recording of the opus 8 symphonies, they devoted a CD to three from the opus 12 collection, RIC 218, and they also recorded a Symphony concertante of Gossec on RIC 242, barcode 5400439002425 (with concertos of Grétry and the obscure Pieltain and Gresnick)

Unlike most of Gossec’s published collections of symphonies, this opus 8 comprises only three, rather than Gossec’s customary six. They are highly entertaining. The mood in the outer  and fast movements (Symphony No. 2 starts with a slow introduction) is lively and gay, with nothing that points to the “Sturm und Drang” tensions and drama of the Mannheim and Viennese composers from the 1760s to 1780s, but evoking rather Mozart and Haydn in their carefree and playful moods. The orchestration is lush, with present brass (especially in No. 3), and Gossec’s instrumentation is always deft and clever, with great interplay between woodwinds and strings, making them sound at times like opera arias where the singers would be the woodwinds (finale of No. 3). There are also fine dialogues between first and second violins in the first movement of No. 3 and finale of No. 2, hightlighted here by a fine stereo separation. The finale from No. 3 has real enthusiastic sweep, energy and drama. The slow movement of Symphony No. 3, “Larghetto tempo di romanza”, is written in a galant and rather superficial style, but the slow movements of No. 1 and 2 have more weight and substance than that (and a very affecting, pre-romantic clarinet solo in No. 1). The Menuettos are the movements that really anchor these symphonies in their time – there is no mistaking them for a Beethoven Scherzo-and-Trio – and, despite some nice oboe colors, the Menuetto of No. 3 is rather square. On the other hand, the Menuetto II of Symphony No. 1 (the Menuetto II is what later evolved into the “Trio” or central and contrasting section of the Scherzo) has wonderfully colored dialogues with clarinets and horns that seem to point to Schubert.

A sign of the rarity of Gossec’s symphonies on disc today is that, other than the Symphony in 17 Parts, I get very little duplication in the numerous recordings I have in my collection (see again my Gossec composer page fo more details). Only opus 8 No. 2 has an alternative recording, by Stefan Sanderling conducting Orchestre de Bretagne on ASV 1124. With his larger and silkier body of strings and more expansive tempo, Sanderling is more openly achingly romantic than Van Waas in the slow introduction of the first movement, pulling it out of the classical style and in the direction of Schubert or Spohr, and the first movement Allegro proper he is more beefy and energetic than van Waas’ (and also very observant of Gossec’s marks of phrasing). On the other hand, Les Agrémens play with more lightness and transparency, especially in the Finale, where by comparison Orchestre de Bretagne sounds somewhat overblown and thick (score available on the International Music Scores Library Project, again eternal gratitude to the generous sharing soul who uploaded it). Anyway, heard on their own, Les Agrémens sound fine, playing with zest, enthusiasm and great colors – and they have no competition in the two other symphonies.

The recital is topped off by the suite of ballets from Gossec’s 1773 opera (the first of his two “Tragédies lyriques”) Sabinus. Very entertaining music, inventive, colorful, boisterous and lively, with adumbrations, in Tambourin No. 1, of the kind of “Turkish” music made famous by Mozart’s Entführung (although I don’t know that it was meant to sound Turkish at all).

Fine liner notes, TT 67 minutes, a highly entertaining and valuable disc. Let us hope and pray and beg the brave Van Waas, Les Agrémens and Ricercar to do a  systematic and complete Gossec symphonies, by opus number when there are such numbers, and don’t let their absence stop them either!