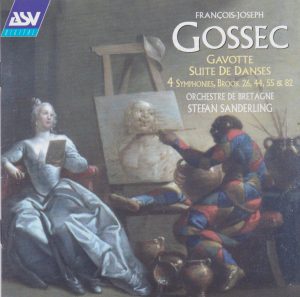 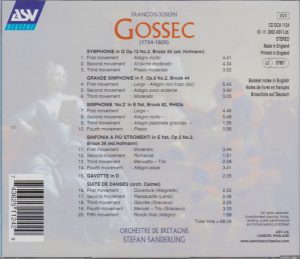 Music for turning a blind eye to the impending collapse
Originally posted on Amazon.com, 21 December 2012

This disc, volume 2 of Stefan Sanderling’s survey of symphonies of François-Joseph Gossec, confirms what I had noted in my reviews of a number of similar CDs devoted to the symphonies of Gossec (Sanderling‘s previous installment on ASV CD DCA 1123, Matthias Bamert on Chandos 9661, Concerto Köln on Capriccio 67 073, Guy Van Waas and Ensemble Les Agrémens in the Symphonies op. 8 and Symphonies op. 12 on on Ricercar-Outhère RIC 263 and RIC 218): they are pure joy, evoking an insouciant society unaware of the impending collapse or willing to go dizzy to ignore it. No “Sturm und Drang” torment, very few late-Mozart pre-romantic accents, and these happen especially in the first movements, but only as temporary inflections of a more merry mood. The slow movements of op. 5/2 and op. 12/2 display a march-like motion as in some symphonies of Beethoven and Schubert (the 9th), and the mood of the latter is charming and “galant”, symphonic salon-music. Only does the slow movement of op. 8/2 unfold more romantic and plangent colors.

In that general context, the architecture and mooods of Symphony Brook 82 (tracks 7-10) is more original, with an extended slow introduction that veers between the charmingly galant and pre-Schubertian accents, an allegro proper that is the most dramatic of the four symphonies featured on the disc. The Menuetto (it isn’t called that way) segues directly into the finale, which functions as an acceleration, as it would in the concluding part of a finale of an Mozart opera.

Gavotte et de Suite of Dances (the latter consists of various miscellaneous movements orchestrated in 1964 by Roger Calmel, a pupil of Milhaud and Messiaen) are fluffy stuff.

When comparisons are available, Sanderling offers a slightly better reading, more spiritied than Mathias Bamert in the first movement of op. 5/2, more openly achingly romantic than the period-instrument ensemble Les Agrémens under Guy van Waas in the slow introduction of op. 8/2, pulling it out of the classical style and in the direction of Schubert or Spohr, and his Allegro proper is more beefy and energetic than van Waas’ (and he is more precisely observant of Gossec’s marks of phrasing). But then, in the Adagio and Finale, his orchestra sounds in comparison thicker and lacking transparency.

This is for amateurs of Mozart and Haydn who’d want a change, or for anyone wanting to steer their mind away from the impending doom.