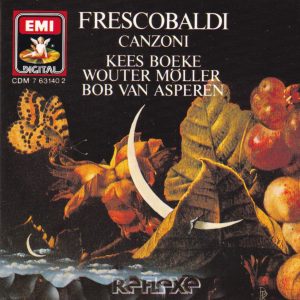 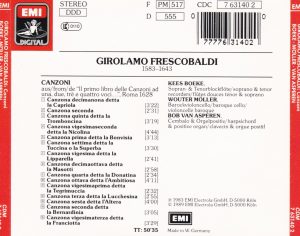 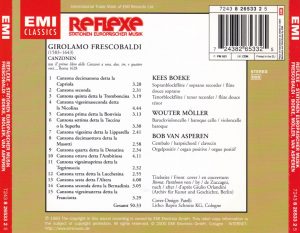 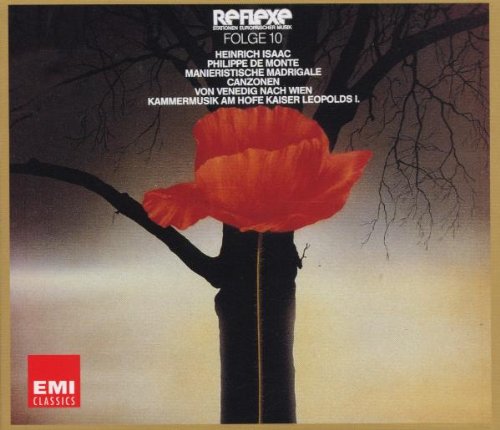 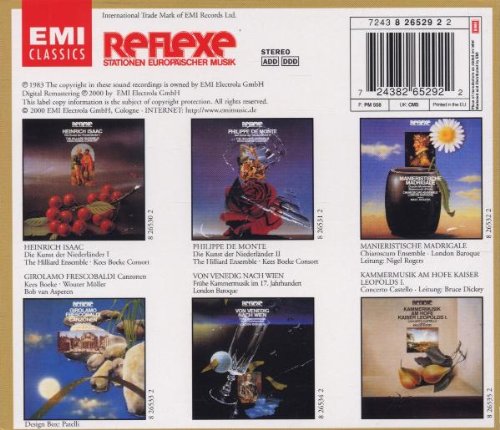 I’ve just sold my copy of EMI Reflexe’s 8 26533 2, Frescobaldi’s Canzoni, on Amazon, and now I’m thinking that maybe I shouldn’t have. I already had (and still do) EMI Reflexe’s previous and original CD reissue from 1989, CDC 7 63140 2, and when I bought a copy of the CD’s second reissue on eBay in a lot with other EMI Reflexe publications from the same series, I decided to put on sale that copy rather than the original CD edition.

Why does that matter? The sonics are the same, no improved remastering for the second CD edition. Liner notes (by flautist Kees Boeke) are the same – they are erudite and informative on the history of the “Canzona” and other instrumental forms (Concerto, Sinfonia, Sonata…) in Renaissance and early-baroque Italy.

Here’s why it matters.

EMI Reflexe was a series launched in the early 1970s by EMI’s German branch Electrola, under the auspices of producer Gerd Berg, and featuring early and baroque music performed on period-instruments, with incredible cover art by Italian artist Roberto Patelli (see here his entry on Discogs.com, with links to more cover art that he designed) , smacking so much of the glorious ‘70s that they’ve now become quite iconic. Those albums were released from 1972 to 1983 in the form of 10 sets of six LPs each (some double albums), under the general title “Stationen Europäischer Musik” (Stationen: steps, stages, stopovers, Stations as in the Stations of the Cross). At the beginning of the 1980s the series totaled 62 LPs, including the 1976 double LP “Weltliche Musik im Christlichchen und Judischen Spanien”, eg “Secular Music in Christian and Jewish Spain” – link is again to the invaluable Discogs.com). There is a webpage devoted to those sets; it’s in Italian, but that is nothing that Google translator can’t overcome.

The series continued after the advent of the CD – but no more with Patelli’s cover art –, and, with Roger Norrington and his London Classical Players joining Reflexe’s roster of performers, it made forays into Romantic music, Beethoven, Brahms, Berlioz, Schumann, Mendelssohn, always on period instruments. Sadly, EMI Reflexe disappaeared in 1994 or 1995 when EMI acquired the Virgin label, and published under its moniker all the repertoire that they would have previously issued on Reflexe, together with reissues of stuff that had originally come out on Reflexe.

In 1989 however, Reflexe had launched a mid-price series, reisuing earlier Reflexe recordings from the LP era (and also albums that, though produced by Electrola and Gerd Berg, were originally published in other series than Reflexe, like Alan Curtis’ Goldberg Variations), and that series totalled circa 40 releases, with none after 1991. But again, in the early 2000s, there was a one-off revival of EMI Reflexe, under the auspices I believe of Electrola, still EMI’s German subsidiary, in the form of 10 multi-CD sets,  again under the general title “Stationen Europäischer Musik”, reissuing the ten original EMI Reflexe LPs sets – and that included a number of albums that had already been CD-reissued on EMI Reflexe’s mid-price series -, but now with the original 1970s-arty covers of Patelli. These boxes have become rare and expensive colllector’s items, more than the original EMI reflexe CD releases. The individual CDs are barcoded and often turn up individually on the marketplace.

And that’s the Frescobaldi CD that I put back on sale because I already had the previous mid-price CD reissue (it was part of set vol. 10), and maybe I should have done the opposite. But what’s done is done, I’ve ripped the contents to my computer (and checked that they were sonically the same as on the mid-price reissue) and scanned back and front covers, and you’ve got to let go… Maybe I’ll chance some day on an affordable copy of set vol. 10…

And with all that: music is lively and, with its predominance of flute, gentle and sweet, and, I find, somewhat boring. Music for the Prince’s entertainment during meals, Tafelmusik, meant to not disturb the conversations. For all his advocacy of Frescobaldi’s Canzoni, Boeke seems to admit as much: “at first glance they’d seem to be of comparatively conventional character, as indeed they are in the opinion of most schlars. (…) There is no doubt that Frescobaldi’s canzonas hardly had a decisive influence on the subsequent development of instrumental composition, probably because of their lack of overt (and novel) virtuosity, and the preponderance of contrapuntal and structural preocupations”. Boeke calls Frescobaldi’s canzonas the composer’s response (and reaction) to the newly-developing and much more virtuosic Sonata, but not too much store should be put on those differences in denomination, and indeed the canzonas sound like your usual trio-sonatas. I much prefer the peasant rambunctiousness of Praetorius, Susato and Gervaise.

By the way: in the liner notes, Boeke insists that the Canzoni were published in 1623, “(not 1628, incidentally)”, that the 1628 edition was a reprint, in view of which it seems like an embarrassing blunder that the CDs back cover should date them… 1628.

An article from the magazine Early Music on that “original” Reflexe series. Even if you can’t go past the cover page, it’s an interesting read.

And see my EMI Reflexe CD discography for complete descriptions and detailed contents of of the ten “Stationen” sets.