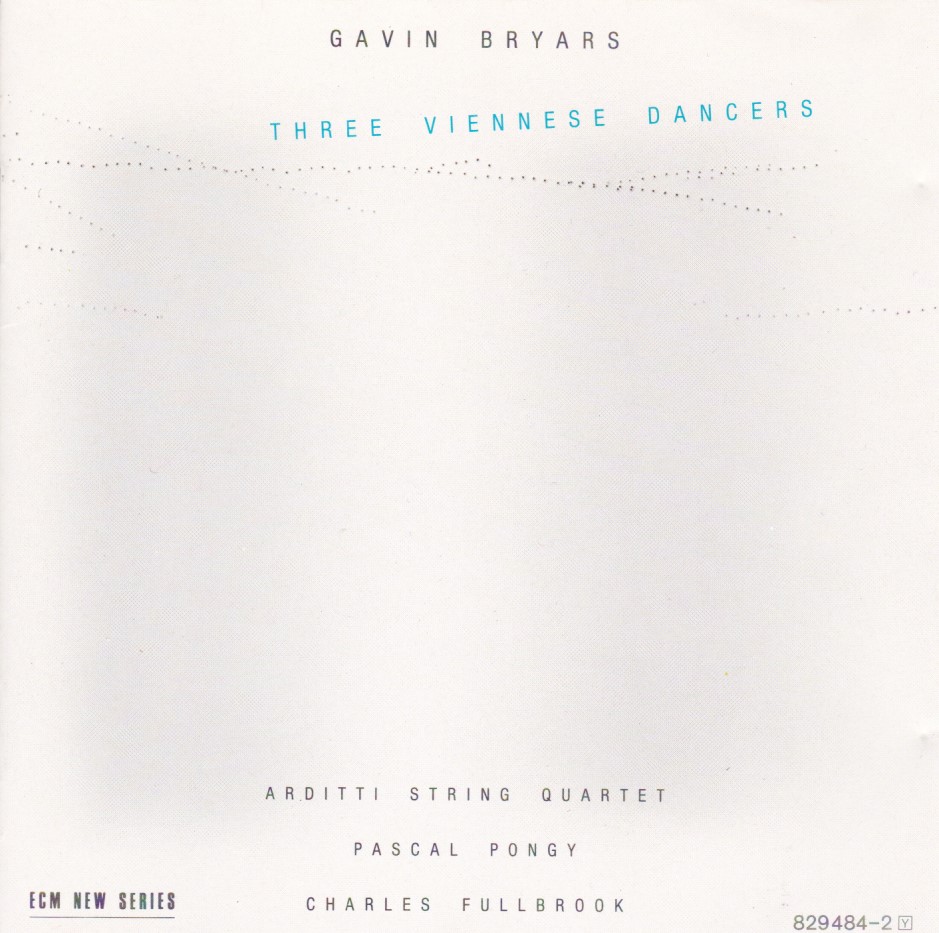 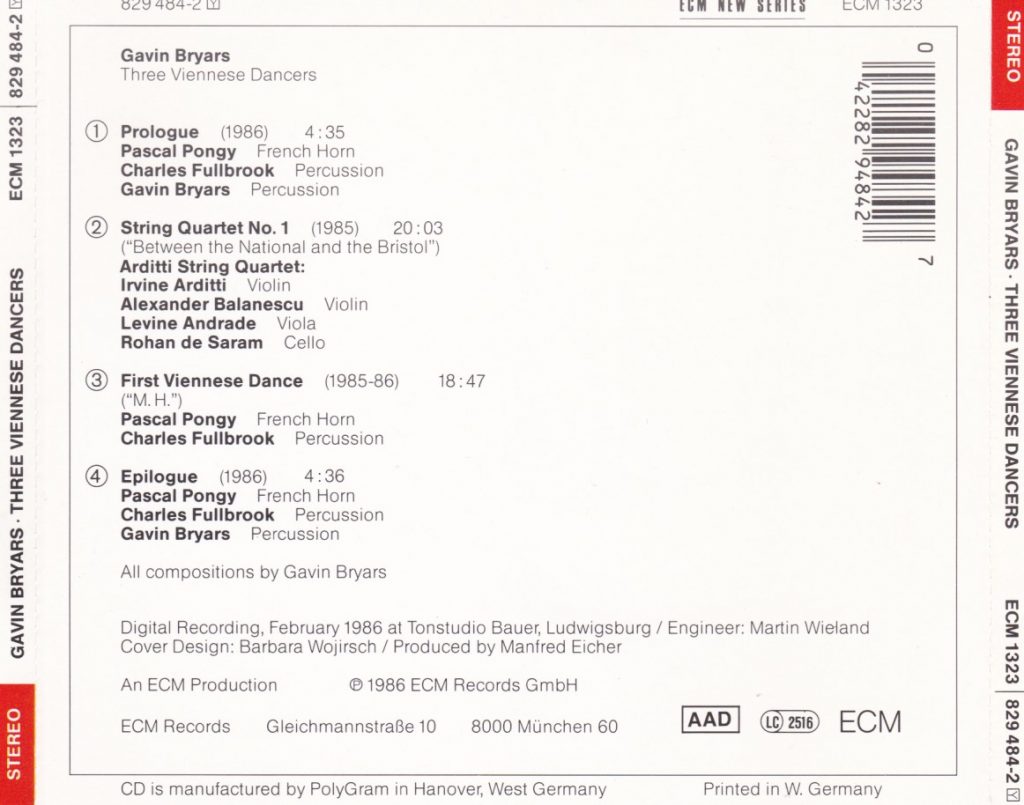 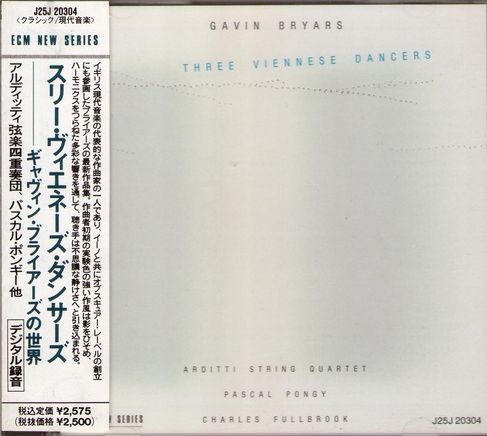 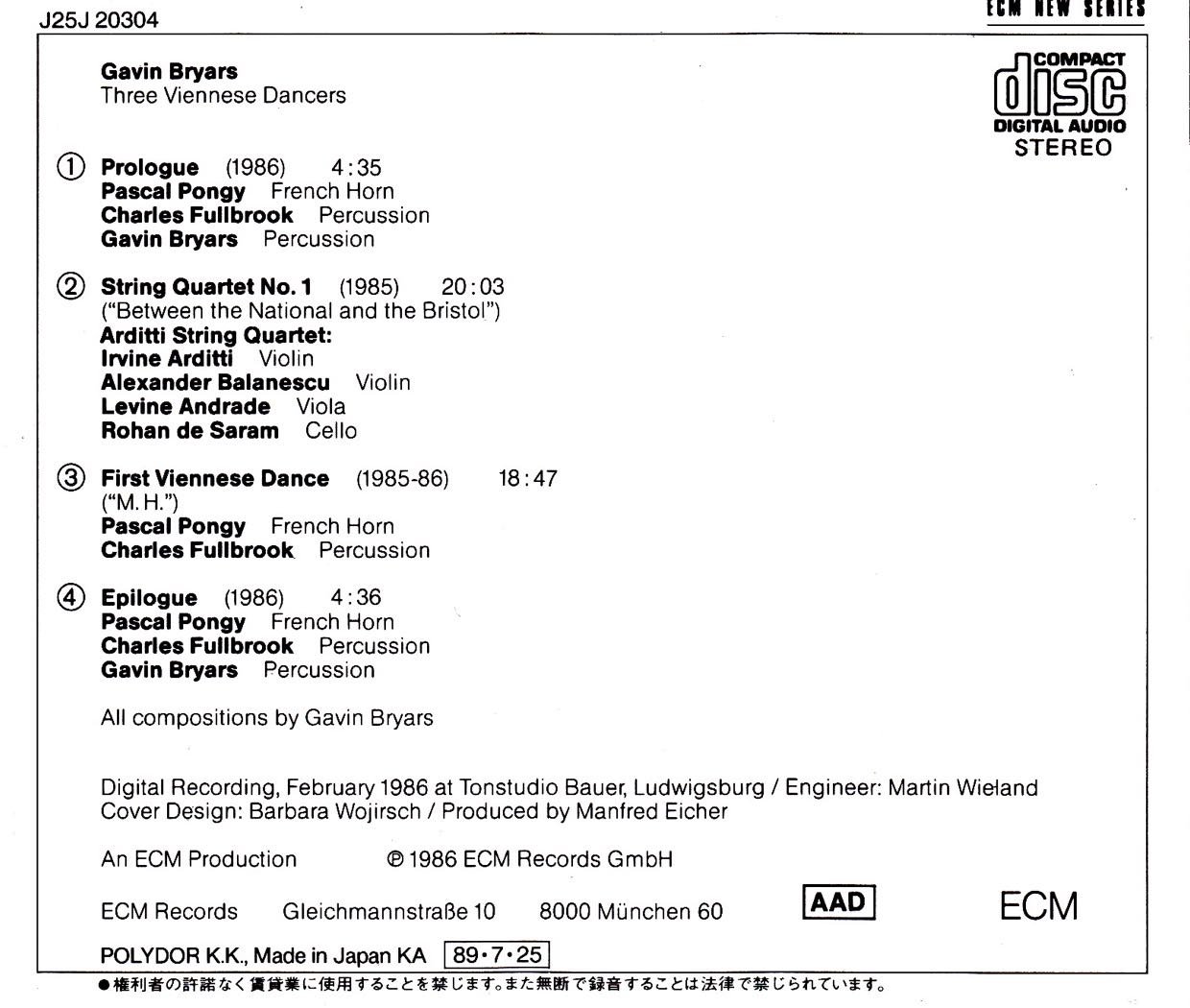 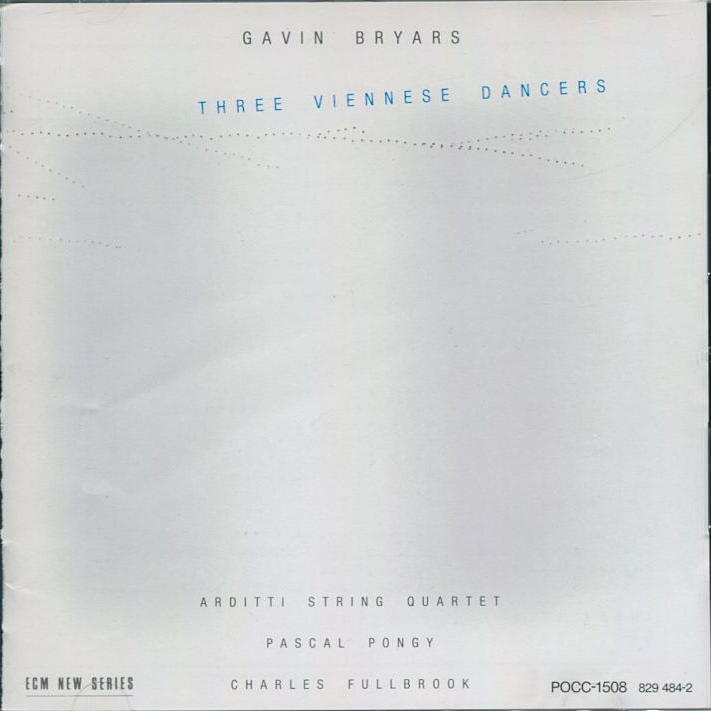 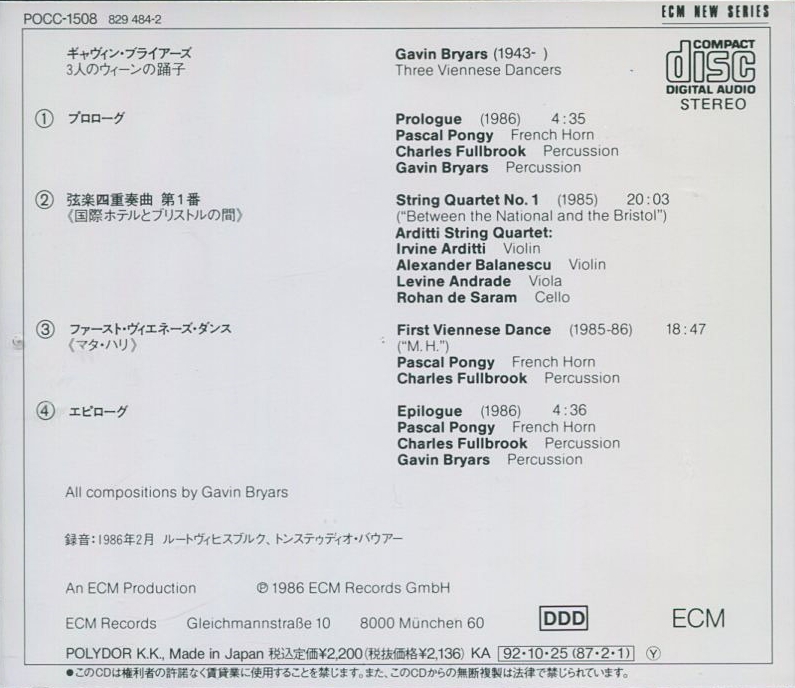 The String Quartet is the masterpiece here, but better go to more complete collections by the Balanescu or Lyric Quartet
Originally posted on Amazon.com, 3 August 2016

Three Viennese Dancers, from 1986, is really only one piece, “First Viennese Dance”, with the two others being a short Prologue and Epilogue both consisting of the same music. First Viennese Dance is a tribute to Mata Hari, who danced in the Vienna Secession Hall one evening in late 1906. The piece was first planned as an aria for a scene from Robert Wilson’s CIVIL WarS, but the scene was abandoned. Ultimately it came into being as a composition for French horn and percussion, mostly metallophones (gongs, crotales, glockenspiel, bells). Why “Three” Viennese Dancers? Because, while searching for an appropriate text for Wilson’s planned Mata Hari aria, Bryars came across the fact that two other great female dancers were present in Vienna that same evening, “each one ignorant of the others’ presence”: Maud Allan and Isadora Duncan. In the liner notes Bryars doesn’t mention that he never composed a Second and Third Viennese Dance, though. The music is slow-moving, ritualistic, with the French horn entoning a slow medtitative melody over the busier accompaniment of percussion, often using harmonics. It is atmospheric but not very dense or eventful. Just washes of meditative sounds, perfect for reaching level 6 of communion of your mind with the universe in your Yoga class.

But the great piece here is the First String Quartet, written in 1985 for the same Arditti Quartet who plays it here. Again the music is slow-moving, slowly pulsating, meditative, very lyrical without being saccharine, mysterious, haunting, other-worldly, with the strings often playing in the highest registers and harmonics. Sometimes the quartets of Janacek and their exacerbated lyricism come to mind. It’s not really clear why Bryars subtitled the Quartet “Between the National and the Bristol” – in fact, this is a reference to the Three Viennese Dancers, since, that night when Mata Hari danced in Vienna, she stayed at the Hotel Bristol, while Maud Allan was staying at Hotel National, and Isadora Duncan in an undetermined hotel “between the National and the Bristol”. Bryars doesn’t mention that the piece’s composition had any connection with his work with Wilson and on the Mata Hari aria, so it seems the subtitle was given because of the association of the Quartet and the Viennese Dancers piece on this ECM CD (recorded in 1986).

The liner notes set much store on the fact that the Arditti Quartet plays on “Richard Armin’s RAAD instruments”, but nothing is said about what they are, except that they combine electric and acoustic. Well, I found everything you need to know about RAAD instruments on the online canadian encyclopedia.

Richard (Dick) Armin is a Canadian cellist born in 1944. “He was involved from 1980 in developing experimental applications for electric cello and signal processing which he applied to freelance studio work for recordings and theatre and to instrument designs. He co-founded in 1976 the Armin Electric Strings with his brothers Otto and Paul and sister Adele and in 1989 began to play in the group Hemispheres with Adele.

Armin created ca 1981 the technology that resulted in a new type of electric string instrument. The basic RAAD designs, involving pick-ups and effects outputs, were incorporated as RAAD Technologies Inc in 1983, but the instruments did not emerge as artistically and commercially viable products until ca 1986. Later additions to the basic technology involved support for the Musical Instrument Digital Interface (MIDI) and a pre-amplification system with tone controls (designed by Pearce Electronics). The instruments can be played through high-quality portable (amplified) speakers or through keyboard amplifiers. The bodies of the instruments, eventually of silver spruce, were also finalized after the incorporation of the basic technology, and the instruments eventually were marketed by the Vace group. Patents are held on the RAAD technology in Canada, the USA, Japan, the UK, France, and Hong Kong. In 1988 the system won the silver trophy for best product in music and sound at the Forum des arts de l’univers scientifique et technique (FAUST) in Toulouse, France.

The Armin Electric Strings played the RAAD instruments on a number of recordings, including the song ‘One Tree Hill’ on rock band U2’s recording The Joshua Tree (1987, Island ISX-1127), the album Fascinatin’ Rhythm: Music of George Gershwin with Julius Baker, Jeanne Baxtresser, and Andrew Davis (1984, Fanfare DFL-6006), and on Jon Hassel’s Power Spot (1987, ECM 829-466-1) and Riki Turofsky’sMusic of Kurt Weill (1985, Fanfare DFL-9026). Other recordings by the Armins with the RAAD instruments include a recording of James Montgomery’sWildfire with the Canadian Electronic Ensemble (1990,Trappist Trap-9003-CD), The Beatles Connection with Ofra Harnoy (1985, Fanfare DFL-9016/Pro Arte CDD-387) [oh yes, I’ve even reviewed that one, Electric Beatles], Circles with Don Thompson (1980 Intercan IC-1008), and Victor Davies’Fun For Four with Arthur Polson (1986, Pro Arte CDD-368). Other users of the RAAD instruments include Toronto jazz-rock violinist Hugh Marsh, various jazz, pop, and theatre performers (including the 1990 Toronto production of The Wizard of Oz), the Arditti Quartet, and cellist Yo-Yo Ma on his 15 Aug 1991 premiere at Tanglewood of US composer Tod Machover’s Begin Again Again … which featured two electric cello systems (RAAD and Zeta) and the performer’s Stradivarius cello, all with computer-processed accompaniment.”

As beautiful as is the music of String Quartet No. 1, the music of Bryars’ Quartet No. 2 and 3 is equally beautiful, so, despite the legitimacy of the Arditti in the quartet written for them, I suggest going to the recording of the Balanescu Quartet on Argo 448 175-2 (1995) (with Quartets 1 & 2 and The Last Days for two violins) or The Lyric Quartet on Black Box BBM1079 (2002) (with Quartets 1-3). I don’t hear any clear-cut superiority of any version either, all three have worked under the composer’s supervision, all three have their (minor) plusses and (minor) minuses (and those are very subjective) but all three are fine and do full justice to the music. The RAAD instruments seem to give a slightly more metallic sound (but that could be an effect of the recording pickup as much as of the instruments) but produce beautiful harmonics and eery, other-worldly sounds. The recording pickup also affords great impact to the lower voices, viola and cello, sometimes to the point of being “all in your ears” rather than sounding, as with the Balanescu Quartet, more embedded into the sonic whole. TT is a not particularly generous 49 minutes.