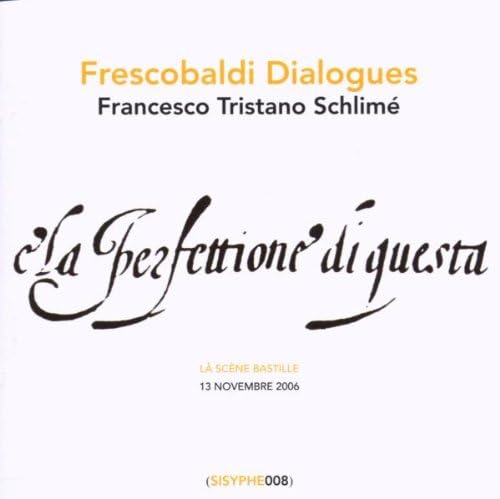 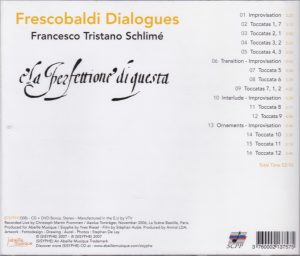 Schlimé’s editing scissors have made this set less indispensable than it might have been, but it still affords many beauties
Originally posted on Amazon.com, 16 November 2011

Whenever I’ve listened to Frescobaldi’s Toccatas and other keyboard music played on the harpsichord – and I’ve returned once in a while to my CD by Robert Woolley on EMI Reflexe, if only to check if my feelings had changed – I’ve been bored to death, and puzzled that the music was held in so high consideration, by no less apparently than Purcell, Pachelbel and God – pardon: Johann Sebastian Bach. But (I thought) what match were Frescobaldi’s threadbare, mostly slow-moving and rambling Toccatas, compared to the ebullience, the energy, the diversity, the tautness of organization of Johann Sebastian’s?

But I also wondered if it had anything to do with the instrument. Sorry, fans of authenticity, but in 17th/18th century keyboard music I prefer the richer harmonics and songfulness (to my ears) of the modern piano – no criticism implied of those who think otherwise, of course. Hearing Haendel’s suites, Rameau’s and Couperin’s music played at the piano (I kow-tow in admiration and gratitude to Marcelle Meyer and Alexandre Tharaud – and many other pianists as well) has been revelatory to me. The only composers for which I have no clear preference between harpsichord vs piano are the boisterous Spaniards, Scarlatti and Soler. So maybe it was the instrument rather than the composer. In fact, I recently listened to a Frescobaldi recital played on the accordion, and enjoyed it tremendously (see my review of Stefan Hussong plays Frescobaldi on Thorofon). Incidentally, it helped me realize that one of the reasons of my boredom with Wolley on harpsichord was that the harpsichordist was indeed very square and boring in his interpretation. So I wondered if I might enjoy Frescobaldi played on the modern piano. Unfortunately, despite the composer’s notoriety, pianists didn’t seem to want to pick up his music.

Until this one, that is. I had come across the name of Francesco Tristano Schlimé, but it is the first time I actually hear one of his recordings. He is a pianist born in Luxemburg in 1981, and a kind of maverick, refusing to bow to the traditions and rules of the classical music scene, and straddling, if I understand, the fields of classical and techno-tinged modern jazz, playing in clubs more often than in the concert hall. This Frescobaldi recital was indeed recorded live on November 13, 2006, in a Paris night-club (the liner notes are involuntarily comical when they wax enthusiastic that this was “the first concert of music by Frescobaldi ever given in a night-club” – yeah, sure, I love the notion of a “night-club” in 17th Century Catholic Rome – and with a little bit of techno added for the ambience).

Apparently he goes by the name of Francesco Tristano when he plays non-classical. He seems to have a taste for the strange bedfellows, and his latest disc, for DG, in 2011, mates Bach and Cage (barcode 028947641735), and there he is not billed as Schlimé but as “Francesco Tristano”.

Here, in this 2007 CD, Schlimé intersperses Frescobaldi’s Toccatas (the liner notes and track listing are uninformative about this, but they are those from the First book: Frescobaldi wrote two books of Toccate) with his own improvisations. Commendably, he limits those to four, and keeps them relatively short, circa 10 minutes on the disc’s TT of 52. The impros are inocuous, Keith Jarrett peppered with a bit of Riley and a strong flavoring from the slow movements of Copland’s Piano Sonata. They also blend relatively well with the Frescobaldi Toccatas, which always have an improvisatory feel to them – but I should really turn that phrase around: Schlimé plays the Frescobaldi Toccatas in a way that makes them blend well with his own improvisations. The disc is titled “Frescobaldi Dialogues”, and sure enough: the composer should have been credited as Frescobaldi-Schlimé, just like the orchestration of Mussorgky’s Pictures at an exhibition is credited to Mussorgsky-Ravel, and the one of Rimsky’s Scheherazade to Rimsky-Korsakov (hey, just to make sure that nobody takes me at face value on this last one). The score of the Toccatas is available on-line from the International Music Scores Library Project (I kow-tow in admiration and gratitude to those who uploaded them), and it appears that Schlimé has in fact, in some tracks, made his own concoction of the Toccate, cutting and pasting various Toccate together (so the track listing’s cryptic indication of “Toccata 1,7” or “2,1” or “3,2” or “4,3” doesn’t read, as I first thought, “7th Toccata from the first book”, “first Toccata from the second book” – and there are no third and fourth books of Toccatas anyway – but a collage of Toccata 1 & 7, 2 & 1 etc). Adepts of authenticity and Urtext playing, steer clear. On the other hand Schlimmé does play 5, 6 and 8 to 12 complete, or fairly complete (it is easy to get lost following the score, when you don’t know if Schlimé is adding his own flourishes at cadential points or has simply jumped further – see more about this hereafter). Adepts of Urtext authenticity, you may return.

But it is also the way Schlimé plays them: not only is he extremely free and imaginative in his interpretation of Frescobadli’s written notes – and that, I believe, his very much in the character and style of the pieces – but he also plays them mostly as dreamy middle-of-an-insomniac-night improvised nocturnes (with some flights of playful skittishness, fingers running up and down the range of the keyboard over monophonic lines) rather than like anything that would point to Bach’s ebullient Toccate. But that may be after all how they should sound, and listening to them from the perspective of Bach’s Toccatas probably leads one to draw wrong expectations. If you forget Bach and just listen to what Schlimé offers, the music has its beauties and fascination, although 50 minutes of it might be a little uniform (the Toccatas are quite repetitive in their formulas, and no wonder Schlimé can seemlessly mix one and the other).

The sound of the piano is vivid and realistic and there are a few audience noises which I haven’t found obtrusive. The set comes with a bonus DVD, a film with almost 24 minutes purporting to originate from that very concert, although, on careful comparing, it isn’t always the same music as on the CD. There are slight differences in the two improvisation played by Schlimé, the introductory one running to 2:36 and the extended one between 11:33 and 17:05, corresponding to but not exactly the same as those on track 1 and 10 of the CD. But the major difference is with the first Toccata, which he plays at the concert complete and Urtext, between and 2:36 and 7:00 (fans of authenticity note this!), raising the thought that the conflation of 1 & 7 that is on track 1 of the CD is not anything Schlimé actually played, but the result of editing in the production studio. If so, it is regretable: the Urtext 1st is in no way an inferior or over-long piece that would need doctoring. Likewise, hearing Toccata 6 on the DVD (7:03 to 11:38) I have no difficulty following on the score, and it makes me realize that the CD version (track 8) is in fact cut by a minute. On the other hand Toccate 11 & 12, from 17:07 to the end, are the same as on the CD (tracks 15 & 16). Other than that, lavish production: five cameras, if my count his right: one on Schlimé’s face, two on the keyboard each side of the hands and for profiles (sometimes we see the right hand when it is the left hand that his running and conversely, but that is menial), one above his head for the bird’s view of the keyboard and even one from almost inside the piano, showing short shots of the ballet of felted hammers. Everything is well-covered, and not just the hammers.

Schlimé is certainly an unconventional personality, and it would rather speak for him, if it hadn’t prompted him to needlessly doctor what seems to have been given on the concert: a complete run of the first book of Frescobaldi’s Toccatas. As such, it makes his set, despite the beauties if affords, less indispensable than it might have been otherwise. Anyway, he’s young, and will probably end up like Friedrich Gulda, wearing a crocheted skull cap and playing Mozart to old ladies. There’s an age for everything. I also like that, in the short liner notes he contributed for the CD, Schlimé seems to express the same kind of bafflement he first experienced when he looked at the score of the Toccate as mine when hearing Frescobaldi’s music played on the harpsichord: “absence of strict tempo (battuta), freedom of ornamentation and great structural liberty are some of Frescobaldi’s suggestions” in the preface to his volume of Toccate, says Schlimé. But, “little by little, I find my way in this distant music, in this composer-improviser” (my translation, less polished but closer to the French Urtext than the one provided in the liner notes). In the first inside page of the booklet there is a close-up photo of Schlimé (more juvenile-looking, and hair shorter than on the film) intensely staring at the camera: he looks like a mad-man, and that’s another point in his favor.