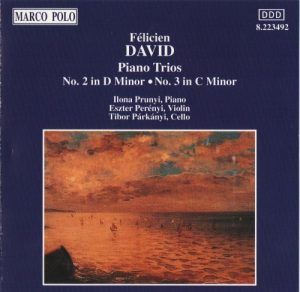 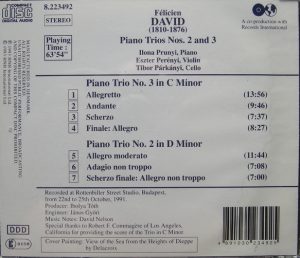 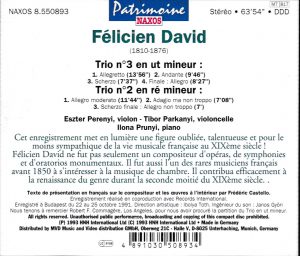 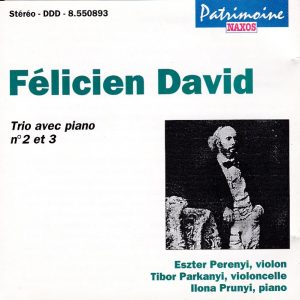 Félicien David (1810-1876) (not to be confused with his near-exact German contemporary, violinist and composer Ferdinand David, 1810-1873) was French, and during his life better known for introducing a North-African and Middle-East-inspired exoticism (the so-called “Orientalism”) to choral and opera music (he had made a long journey to these regions from 1833 to 1835) than for his chamber music, paving the way for Delibe’s Lakmé, Bizet’s Djamileh, Gounod’s La Reine de Saba and Lalo’s Namouna. No trace of such exoticism in the Trios. Published in 1857, as David was writing his opera Herculanum, they are beautiful works in romantic style. There is a romantic sweep in the opening Allegro and Finale of Trio No. 3 (tracks 1 & 4) that brings to mind similar works of Mendelssohn and Brahms, and also Schumann in the cavalcades of the 3rd Trio’s Scherzo (track 3) and 2nd Trio’s Finale (track 7), and a songfulness in the first two movements of the 2nd Trio that evoke Schubert. Another figure that strongly comes to mind while listening to David’s third Trio, the chordal accompaniment of its piano part and the great songfulness of its violin and cello lines, is Alkan and his own Piano Trio, and the comparison seems particularly appropriate, as Alkan was only three years younger than David. But David also seems to stand on the edge of two stylistic worlds, and there is a charm to the slow movement of Trio No. 3 that roots its more in Haydn and Beethoven. At any rate, these works confirms an observation often made, that Romantic composers considered “minor” have composed major chamber music.

The scores are available from the International Music Scores Library Project. The Hungarian trio here plays excellently. Excellent and informative liner notes (at least in the French edition I have, in the collection “Patrimoine”, originally distributed only in France, and in French only) mentioning that David also composed, in the years 1845-46, a cycle of 24 String Quintets which he titled “Four Seasons” – I want to hear them! …and Hallelujah, they’ve been recorded, by a group of musicians around cellist Christophe Coin, published in 2011 on Laborie, LC11, barcode 0810473010075, and the same label also published a recording of David’s First Trio and 3rd Quartet, again with Coin (and Quatuor Mosaïques) under the title “Le Souvenir”, LC12, barcode 0810473010068 (I already have that one). That’s the problem CDs: however many you have and hear, even of the most obscure material, each CD will lead to several more, and it never ends. Those from Laborie, a minuscule French label that went under in 2015, are now hard to find, and for that very reason, even more desirable.