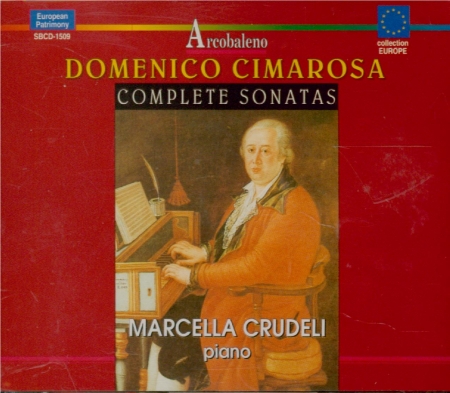 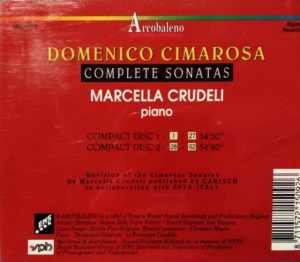 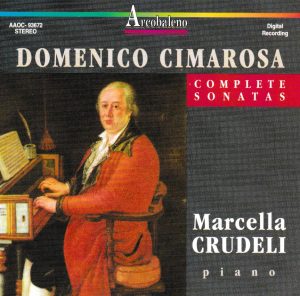 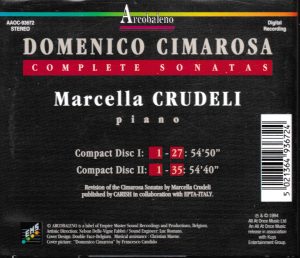 The recent (2008) recital of Sonatas of Baldassare Galuppi (1706 -1785) played on the piano by Andrea Bacchetti (RCA-Sony 88697367932 barcode 886973679326) sent me back to this 2-CD set of the complete Sonatas of Cimarosa. The Galuppi disc offered many felicities, but entailed some disappointment as well. This had to do with the formal structure adopted by Galuppi, not yet the three-movement, fast-slow-fast architecture illustrated so brilliantly by Haydn and Mozart, but a two-movement formal design consisting of slow-fast. Added to the fact that Galuppi often extended these slow movements way too long for their basic material (or his ability to develop it imaginatively), the result was that there seemed to be too much “pretty”, pensive, wistful meditation and not enough adrenalin. On the other hand I remembered having been bowled over by this Cimarosa recital, when I bought it years ago. Memories confirmed.

Galuppi’s dates makes him of a generation later than Bach, Vivaldi, Haendel and Scarlatti, but of an older generation than Haydn and Mozart as well: he was a contemporary of the two eldest Bach sons, Carl-Philipp-Emmanuel and Wilhelm-Friedemann. Domenico Cimarosa (1749-1801) is an almost exact contemporary of Mozart, and shares with him an unfortunately early death (he had just turned 51). What he shares with Galuppi is a renown mostly as a composer of operas (and first and foremost of Il Matrimonio segreto, The Secret Marriage) rather than as one of keyboard music. Of more significance perhaps is that, like Galuppi, he doesn’t follow the classical architecture of three movements, fast-slow-fast. In that respect, he is even more passé than Galuppi: his model is the short one-movement Sonata whose towering master was Scarlatti (a few, like Sonata Vitale Vol II/21 or Vitale Vol II/31, CD 1 track 21 and 26, do have, within their single movement, an A-B-A, fast-slow-fast structure, and some, like Vitale Vol II/30, CD 1/24 has a slow-fast design).

The comparison with Scarlatti seems quite appropriate, since Cimarosa’s Sonatas have an uplifting verve, a dynamism and a dazzling digital virtuosity, and, in the slow ones, a lilt and grace that are very reminiscent of his forbearer. One of them, the sonata in C minor Boghen vol. III No. 3 (CD 1 track 9) even evoked the 13th variation in Bach’s Goldbergs. But stylistically (not surprisingly), the Sonatas sound more like movements from Haydn Sonatas or, in the fast ones, like piano reductions of the orchestral part of the finale of some Mozart (or Cimarosa) operas. One additional advantage (over Galuppi at least): each movement is short and never outstays its welcome, on the contrary. They are all little, self-contained gems.

Other than this disc (recording date not indicated, but the original edition was released in early 1991 – I have the 1994 reissue), I had never heard of Marcella Crudeli. She was a student of Alfred Cortot, a teacher at the Academia Santa Cecilia in Rome and the Ecole Normale de Musique and Paris. She has devoted much activity to the rediscovery of the keyboard output of Cimarosa, and published a “revised edition” of the 62 she plays here, with the small Italian publisher Carish, although the set’s track listing refers to two earlier publications, Boghen and Vitale. She has very cleverly assembled her recital, not in any chronological order or even by order of publication, but so to compose, as far as possible, larger fast-slow-fast Sonatas (there are too many fast movements in relation to the slow ones to be consistent all over).

Since posting this review, I acquired an earlier recording of 32 sonatas made in 1980 for Pavane Records of Belgium by the Tunisian pianist Roberte Mamou (I have it on Pavane Records ADW 7044-2, barcode 5410939704422, but it as also published on a number of other labels). All of them are included in Crudeli’s set. I also downloaded from the International Music Scores Library Project – bless them – two collections, a Russian edition of 12 sonatas and a Polish edition of 20, which cover all the sonatas played by Mamou save one.It took quite some work to establish the correspondence between the CDs and the scores, since none of the track listings refer to these particular editions’ ordering, and the track listings are not comparable with each other, Mamou’s being listed by tempo indications (“allegro giusto” – sometimes not in-sync with those of the scores) and Crudeli’s by reference to the Boghen and Vitale editions. It did help that Mamou’s ordering followed at least the three books of Boghen’s edition. Anyway, for those who’d want to download the scores from IMSLP, here is the correspondence for Crudeli (for Mamou, see my review of her recording):

In this review, I will then refer to the sonatas as, for instance, 12-1-2/25, indicating the Russian collection of 12, No. 1, CD 2 track 25 on Crudeli’s set. I’ll refer to those of Mamou only by track number. Incidentally, it puzzles me that Crudeli’s set boasts being the “complete sonatas”, since the Polish collection of 20 has one, No. 12, which neither Crudeli nor Mamou play (unless I haven’t been able to recognize it on Crudeli’s set, but I doubt it). Cimarosa’s entry on Wikipedia also mentions 88 sonatas for harpsichord or fortepiano in his output.

On comparison, it turns out that the merits are equally divided between the two pianists. Crudeli is much better at the marcato than at the cantabile, with a harder and more percussive tone, lacking interiority and feeling in the slower sonatas, making Mamou’s softer and more wistful approach usually much more preferable there (like Crudeli’s 20-2-1/7, 20-3-2/2, 20-4-1/2, 20-5-2/5, 20-8-2/30, 20-13-1/5, the andantino first section of 20-18-2/35; and if the Russian collection of 12 is absent here, it is because it contains mostly fast sonatas). I also find Mamou’s faster tempos in those slower movements very welcome: it takes away the sentimentality, and the irresistible little clockwork passages come out much better (as at the end of 20-5-2/5). In the allegretto 20-3-2/2, the Spanish flavor, the short whiffs of Soler’s Fandango go entirely lost with Crudeli (Mamou’s track 6). Crudeli’s hard touch doesn’t sit well with her slower tempos anyway; the 2:39 minutes of 20-8 have irresistible charm with Mamou (track 13), their 4:08 sound frankly ponderous and outstay their welcome with Crudeli (CD 2/30). Even when Mamou adopts a slower tempo, as in the Siciliano (Crudeli’s 20-13-1/5, Mamou’s track /23), her softer and dreamier touch works better than Crudeli’s more percussive one. Crudeli’s staccato in 12-5-1/9 (the one that evokes Bach’s 13th Goldberg variation, Mamou’s track 29) and 20-16-2/34 (Mamou’s track 16) are fine, though.

Ultimately, despite her shortcomings in the slower sonatas, Crudeli’s set remains the first option, because it offers 30 more sonatas (of equal quality) and because of its irresistible verve in the faster ones (and those out-number the slower ones that are preferable with Mamou). But Mamou is a welcome complement, especially in the slow movements. I haven’t yet heard the collections of Victor Sangiorgio on Naxos 8.570718 (2009) barcode 747313071876 and Naxos 8.572689 (2011) 747313268979, and Donatella Failoni on Hungaroton (Classical Diamonds CLD 4037 barcode 5991810403721 or White Label HCR 149 barcode 5991810014927). But whatever version you listen to, bottom line is: can you imagine a life without the sonatas of Scarlatti? Well, if you haven’t yet heard the sonatas of Cimarosa, that’s the kind of life you’ve been living thus far.

Now I need to get in touch somehow with Alexandre Tharaud (wonderful recordings of Couperin and Rameau on Harmonia Mundi) and make him aware of Cimarosa.