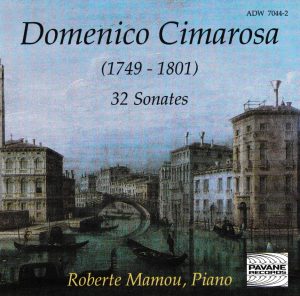 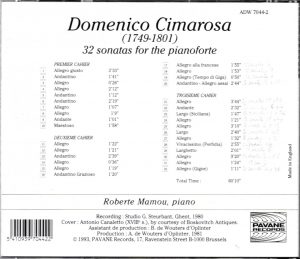 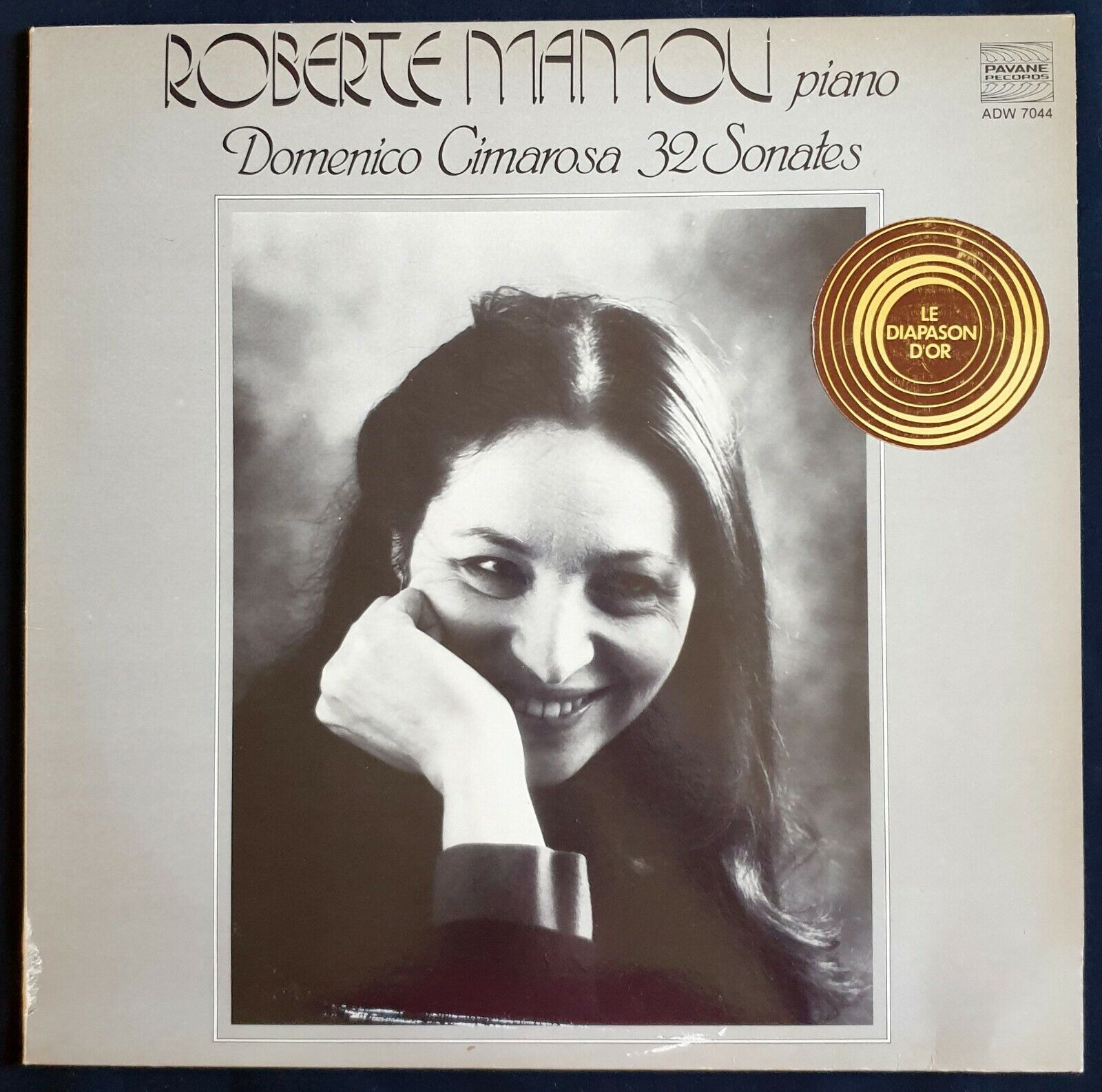 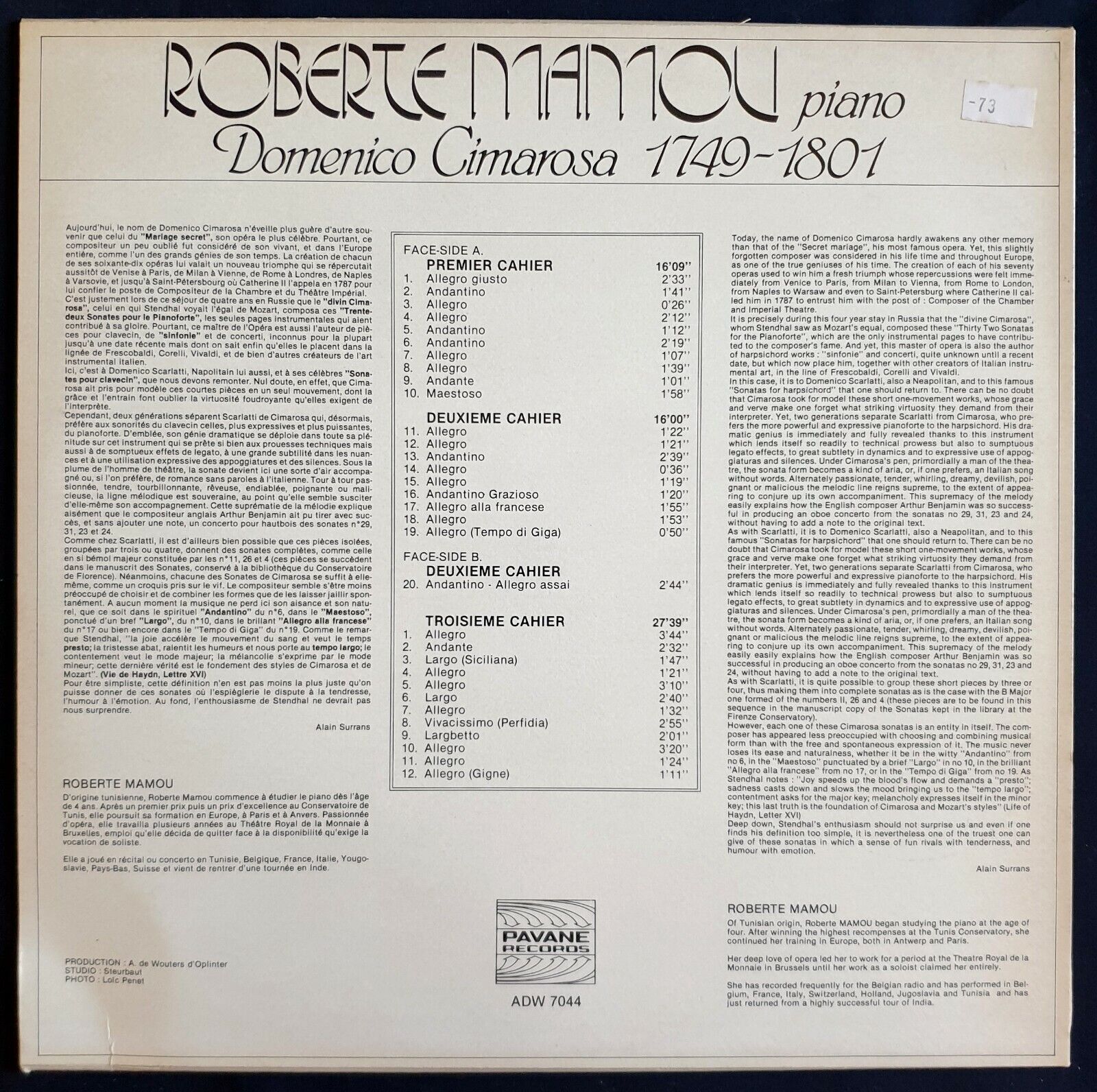 The missing link between Scarlatti and Haydn, and one of the best-kept secrets of classical music
Originally posted on Amazon.com, 10 June 2011

The keyboard sonatas of Domenico Cimarosa are still today one of the best-kept secrets of classical music. While pianists have made part of their standard repertoire the sonatas of Scarlatti, Haydn and Mozart, they have ignored those of Cimarosa, and the recordings are very scanty, and never by prominent pianists. It is not arbitrarily that I mention Scarlatti, Haydn and Mozart. Cimarosa (1749-1801) was the near-exact contemporary of Mozart, and shares with him an unfortunately early death (he had just turned 51). Unlike Mozart, he is mainly remembered for his operas, and first and foremost his popular Il Matrimonio Segreto (The Secret Marriage). Yet his keyboard sonatas are little gems. In many ways, they are the missing link between Scarlatti and Haydn. Formally, you can say that they are backward-looking, harking back the model of the one-movement sonata brought to its apex by Scarlatti. They also share with Scarlatti’s the sparkling verve, the explosive digital virtuosity. But, stylistically and emotionally, they are closer to the world of Haydn in many ways, or maybe to the finales of Mozart’s operas. Also, don’t infer that they are only sparkle and digital prowess. The slower ones often have a wistfulness that makes them opera arias in miniature, and one of them (Mamou’s track 29) even evoked the 13th variation in Bach’s Goldbergs. I rank them as high as those of Scarlatti, Haydn and Mozart, miles above, say, Clementi’s or Galuppi’s (for the latter I’ve reviewed Andrea Bacchetti’s survey on RCA-Sony 88697367932 barcode 886973679326) . Now that major pianists, like Murray Perahia or Alexandre Tharaud, are starting to tackle Haendel, Couperin and Rameau, it is ample time that they discover Cimarosa.

I’ve waxed enthusiastic about the collection of 62 sonatas recorded circa 1993 by Monica Crudeli on an Arcobaleno 2-CD set, which has the immense advantage of being (or at least claiming to be, but more about this anon) the complete sonatas. The Tunisian Roberte Mamou (how many other Tunisian pianists are there?) recorded this collection of 32 in 1980, and I wanted to complement my Crudeli set and compare. Crudeli published a revised edition with the small Italian publisher Carish. I do not have it but the International Music Scores Library Project – bless again all those who upload that invaluable material- offers two previous publications, a Polish edition of 20 sonatas and a Russian edition of 12 more. This may have been what Mamou had access to, since 31 of the 32 sonatas she plays are included (the odd sonata out is track 28, the so-called “Perfidia”, for which I haven’t been able to find a downloadable score). All those she plays are on Crudeli’s set, of course. One puzzling thing, though, is that the Polish score includes a sonata, No. 12, which neither Crudeli nor Mamou plays. Since Crudeli boasts being the complete sonatas, I wonder if it was established that this one is NOT by Cimarosa after all. But then, Cimarosa’s Wikipedia entry mentions 88 sonatas for harpsichord or fortepiano. Incidentally, the “Perfidia” sonata is on Crudeli’s CD 1 track 6.

Anyway, it took quite some work to establish the correspondence between the CDs and the Polish and Russian scores, since none of the track listings refer to those editions’ ordering, and the track listings are not comparable with each other, Mamou’s being listed by tempo indications (“allegro giusto” – sometimes not in-sync with those of the scores) and Crudeli’s by reference to two earlier publications, Boghen’s and Vitale’s. It did help that Mamou’s ordering followed at least the three books of Boghen’s edition. Anyway, for those who’d want to download the scores from IMSLP, here is the correspondence for Mamou (for Crudeli, see my review of her recording):

What Crudeli and Mamou have in common is that they don’t play the sonatas in the order in which they were published, but reconstruct, so to speak, self contained classical sonatas following the fast-slow-fast pattern – a welcome choice, as it provides for more diversity.

On comparison, it turns out that the merits are equally divided between the two pianists. Crudeli is much better at the marcato than at the cantabile, with a harder and more percussive tone, lacking interiority and feeling in the slower sonatas, making Mamou’s softer and more wistful approach usually decidedly preferable there (like 20-2/26, 20-3/6, 20-4/22, 20-5/2, 20-8/13, 20-13/23, the andantino first section of 20-18/20 – the Russian collection of twelve contains mostly fast sonatas). I also find Mamou’s faster tempos in those slower movements very welcome: it takes away the sentimentality, and the irresistible little clockwork passages come out much better (as in 20-5/2 at 1:10). In the allegretto 20-3/6, the Spanish flavor, the short whiffs of Soler’s Fandango go entirely lost with Crudeli (Crudeli’s track 2/2). Crudeli’s hard touch doesn’t sit well with her slower tempos anyway; the 2:39 minutes of 20-8/13 have irresistible charm with Mamou, their 4:08 sound frankly ponderous and outstay their welcome with Crudeli (CD 2/30). Even when Mamou adopts a slower tempo, as in the Siciliano (20-13/23, Crudeli’s 1/5), her softer and dreamier touch works better than Crudeli’s more percussive one. Crudeli’s staccato in 12-5 (the one that evokes Bach’s 13th Goldberg variation, Crudeli’s track 1/9, Mamou’s 29) and 20-16 (Crudeli’s track 2/34, Mamou’s 16) are fine, though.

Ultimately, despite her shortcomings in the slower sonatas, Crudeli’s set remains the first option, because it offers 30 more sonatas (of equal quality) and because of its irresistible verve in the faster ones (and those out-number the slower ones that are preferable with Mamou). But Mamou is a welcome complement, especially in the slow movements. TT is 60 minutes, no complaint here .I haven’t yet heard the collections of Victor Sangiorgio on Naxos 8.570718 (2009) barcode 747313071876 and Naxos 8.572689 (2011) 747313268979,  and Donatella Failoni on Hungaroton (Classical Diamonds CLD 4037 barcode 5991810403721 or White Label HCR 149 barcode 5991810014927). But whatever version you listen to, bottom line is: can you imagine a life without the sonatas of Scarlatti? Well, if you haven’t yet heard the sonatas of Cimarosa, that’s the kind of life you’ve been living thus far.

Now I need to get in touch somehow with Alexandre Tharaud and make him aware of Cimarosa.