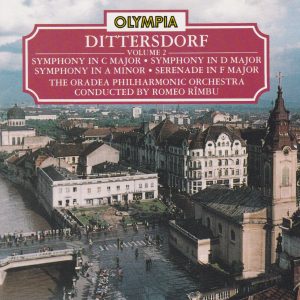 Recorded 9/92 at the Oradea Philharmonic Hall

Even now, more than 30 years into the CD era, Dittersdorf remains relatively unchartered territory on disc. The authoritative catalog of Dittersdorf’s symphonies was established in 1977 by Margaret Grupp Grave in her PhD dissertation, “First-Movement Form As A Measure Of Dittersdorf’s Symphonic Development” (catalog updated in 1986). She lists 116 Symphonies – and that’s not counting those that are lost and those of dubious attribution. Among them, I’ve spotted recordings on CD of only 24 (including the 6 Symphonies after Ovid’s Metamorphoses, and excluding the Symphony “La Prise de la Bastille” published in Paris under Dittersdorf’s name but that’s not from him, but by an obscure Flemish composer called Othon-Joseph Vandenbroecke, about this see my review of Concerto Köln’s “La Prise de la Bastille”, Capriccio 10 280).

So when Olympia published, back in 1993, a three-volume collection from Romania collating nine of those symphonies (plus two concertos on volume 1 and a Serenade on Volume 2), of which this is volume 2, it was a very useful contribution for music lovers interest in the by-ways and “minor masters” of the classical era. Why Romania? Because his engagements led Viennese-born and -trained Dittersdorf to work for a brief period of time at the service of Ádám Patachich, Hungarian nobleman and Bishop of Nagyvárad, now Oradea, Romania. Since this Olympia edition, Naxos dipped a toe into the vast ocean of Dittersdorf Symphonies, but with 15 on five discs (and that includes the two CDs devoted to the Six Symphonies after Ovid’s Metamorphoses), they didn’t go very deep. And with all that, those three Olymphia CDs still very much have their field to themselves, since the Naxos series has duplicated only one Symphony from them – on volume 3, OCD 426, the so-called “National Symphony in the taste of five nations”, also on Naxos 5.8.553975.

Although quite neglected today, Dittersdorf was a renowned composer in his own time, and his fame extended beyond the Austrian empire and all the way to Paris, which was considered back then the capital of the music world (so much so that, witness the Bastille Symphony, unscrupulous publishers used his name for works by other, more obscure composers). When listening to the music of those composers that posterity has placed among the ranks of the “minor masters”, beyond the simple attractions of the music, the underlying question is always lurking: what makes him, to the eyes of their future and our present, “minor” in comparison to those that posterity has selected as “major” – namely, in the Classical era, circa 1750-1800, Haydn and Mozart? Is posterity fair, or is she an arbitrary bitch?

The music of Dittersdorf appears pleasant, agreeable, much in the style of the time, mostly carefree in the Allegros, sometimes with more somber and tormented streaks, and with a more dramatic “Sturm and Drang” atmosphere in the opening Allegro of the A minor symphony (track 9). The Andante of the C major Symphony (track 2) unfolds a touching mood of emotional longing – it could be the longing for love of some character from a Mozart opera, Cherubino or Countessa, or Barberina looking for her pin in the dark –, and there are fine pastoral and nostalgic flutes in the Andantino of the D-minor (6). But Dittersdorfs doesn’t seem to plumb any depths either, neither in emotion nor in harmonic or formal invention. The opening Allegro and ensuing Andante of C-major (tracks 1 and 2) seem to finish before Dittersdorf has really developed his material – at least that’s better than than overdrawing it. Ultimately, the impression arises of rather laid-back works, elegant in a dignified but vaguely inconsequential way, entertaining but generating little excitement.

But then, listening to the A minor Symphony in the alternative version of Camerata Bern under Thomas Füri, recorded in 1982 (part of Archiv’s 2-CD survey of “The Early Viennese School”, 410 599-2, barcode 028941059925, not yet reviewed), one realizes that the impression is due not so much to the works, as to the interpretation of Romeo Rîmbu at the helm of his Oradea Philharmonic. Compared to Camerata Bern, his textures are more symphonic, which potentireally provides for more dramatic impact in the opening Allegro, but this is offset by the lack of dramatic thrust, drive and energy, in a reading that leaves aside much of the movement’s drama.

The difference is even more startling in the Larghetto. With its concertante cello, it is a beautiful middle movement of what could have been the cello concerto that Dittersdorf never wrote (he composed two for double bass, plus a Symphony concertante for double bass and viola, that are among his most popular works on disc, see the discography under my Dittersdorf composer entry). Apparently he was fond of those mini-concertos in the middle of a symphony, judging from the Andantino with solo oboe from the unspecified Symphony in D-major that is occasionally recorded (Dittersdorf wrote about 34 in that tonality, the recordings never say which this one is, and the scores aren’t available online to check). But, by taking it 35% slower than Füri and his Camerata Bern, as a Largo more than a Larghetto, Rîmbu makes it sound at times like another Scene at the brook from Beethoven’s Symphony Pastorale (peasants dozing off in a sultry summer after-lunch), sometimes like the heart-on-sleeve slow movement of a fully-fledged Romantic cello concerto. Camerata Bern is certainly more in style, with more playful moods, making it sound more like Mozart and Haydn. It’s jarring really to jump from one to the other, from the sultry rest by the brook to the joyous dance of the peasants if you will, or, in the more march-like passages, from the trudge vs. the brisk walk, and it confirms again with a vengeance all that we already know about what a tempo can do – Klemperer or Toscanini, and it’s not the same piece.

That said, as much as this is arguably a distortion of the period style and a total misrepresentation of the kind of emotions that the Classical style explored, I must confess a sweet tooth for the movement taken that way: it stirs a brooding romantic nostalgia that I find hard to resist, and it raises again fascinating questions, like, what is it that makes music sound “romantic” – the music or the music-making? In comparison, the music as played by Füri is also very beautiful but in a very different way, not as directly emotionally catching.

But what works in a “slow” movement isn’t as effective in the faster ones. The Menuetto sounds like a plod vs Füri’s strut, and the Finale is the movement that suffers most from the orchestra’s thick textures, lacking the finesse and transparency that are essential to that witty movement. Füri fills it with Mozartean sparkle – but not here. Rîmbu makes it sound like Peasant’s dance from the Pastorale again.

Based on the A minor, now I know that if the Minuetto and Finale of the D major sound solemn, dignified and over-inflated, and the fast movements of the Serenade somewhat pedestrian and down-to-earth, it is likely the interpretation. In 1993 these recordings may have been useful stopgaps – and they remain so a quarter of a century later. The risk is that the flaws in interpretation be confused with flaws of the compositions themselves and give no incentive to explore more works of Dittersdorf or offer new and better recordings. As useful as these recordings have been and, in the absence of alternative, remain, Dittersdorf deserves better. TT 76:14, not complaint here.