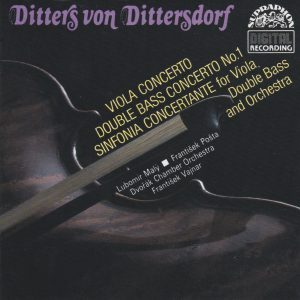 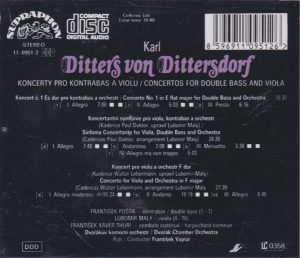 Dittersdorf is not to blame if it is so boring,
Originally posted on Amazon.com, August 17, 2011

Hearing some recordings, one wonders if some composers are considered to be “minor” because their music is inferior, or because they are plagued with inferior interpreters. This one is a good case in point. I discovered Dittersdorf’s Sinfonia Concertante for double-bass and viola on a Romanian CD devoted to “Five Centuries of German Music in Transylvania”, Electrorecord EDC 168 – quite a niche interest, that (see my review) – and enjoyed it so much that I decided to purchase an alternative version. This Supraphon CD seemed attractive enough, as it offered in addition a Dittersdorf Concerto for double bass and one for viola.

But hearing it, I was surprised to find the music very boring. What happened, I wondered ? – What happened ? Quite simple, as a comparison of the two interpretations shows. It is crazy what a tempo can do. Going from the Romanians to the Czechs is jaw-dropping. The Romanian performers sound like they are enjoying themselves, their reading is lively, full of bounce and joie-de-vivre. The Czech performers sound like they are bored, or old, or mired in a pit of thick molasses, or like they’ve just ingested heavy doses of narcotics, or a combination of all four possibilities. Just compare the timings of the finale: 3:05 vs 5:50! That’s almost twice as slow! No wonder they are so boring. And not only that: the orchestral textures are thick. You’d think you were hearing an alternative version of Brahms’ Double Concerto. This is a caricature of Klemperer at his worst. Appalling. The Czech soloists may have more vivid presence than their Romanian counterparts, it doesn’t save their badly distorted basic option. The only interest of the Czech version – and it is very modest – is the long first movement cadenza (5:29 to 7:23) that is not played in the Romanian version.

So now, if the Double-bass Concerto and the Viola Concerto sound equally old, thick in textures, superficially elegant in a bored and boring manner, at least I know, even in the absence of any comparison, that it is not the compositions and the composer that are the problem. Too bad, the program was engaging.

Further discographic research has shown that the Sinfonia Concertante is in fact one of Dittersdorf’s most popular works on disc, with numerous recordings dating back from the 1960s and LP era. See my Dittersdorf composer entry for a discography of the composition, and much more.

But avoid this disc. You’ll be mislead into believing that Dittersdorf is a boring composer. He isn’t. double-bassist František Pošta, violist Lubomír Malý and conductor František Vajnar are – here at least (it would be unfair to generalize) boring interpreters.