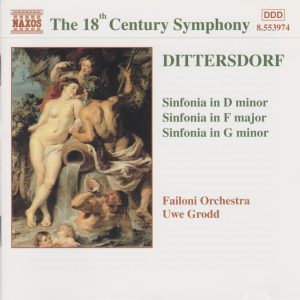 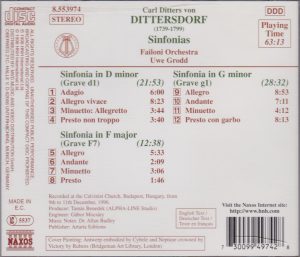 Here goes my theory about Dittersdorf. Based on the same Uwe Grodd’s recording of three Sinfonias with titles, the companion CD of this one on Naxos, 8.553975), a Concerto for Viola and double-bass (Five Centuries of German Music in Transylvania, Electrorecord EDC 168) and the Sympony “La Prise de la Bastille” (The Storming of the Bastille) performed on a recital disc by Concerto Köln on Capriccio (10 280 La Prise de la Bastille: Music of the French Revolution) – the latter really an extraordinary work -, I wondered why Dittersdorf hadn’t made it in the eyes of posterity, while Mozart and Haydn had. Mind you, not that I found that Dittersdorf’s genius was greater than theirs; but I didn’t find these few works inferior to their best either. One thing was sure, Dittersdorf’s anonymity to posterity was not a matter of quantity: 120 symphonies are solidly attributed to him, and 90 more are of dubious attribution. But based on these few samples, it wasn’t a matter of quality, either.

Then I learned that Dittersdorf’s Symphonie “La Prise de la Bastille” wasn’t by Dittersdorf after all but by an obscure Flemish composer and hornist established in Paris, Othon-Joseph Vandenbroecke (also spelled Vandenbroeck, Vandenbroek, Van den Broeck or Van den broek), so obscure that he gets no listing on Amazon.com and none on English Wikipedia. And now these three Sinfonias: pleasant (as the music of this era), but offering little that’s really special.

Not that the rest isn’t pleasant and entertaining. It is, with spirited outer movements and elegant Andantes, but they are written in a galant style that plumbs no emotional depths. And the Minuettos of Sinfonia in F major (track 7) and Sinfonia in G (track 11) are square and trudging to the point of boredom. Missing is the kind of spirited zest and bubbling energy – to say nothing of the high Sturm und Drang drama – found in some of the symphonies explored by Concerto Köln, by Vanhal (Teldec 7 0630-13141-2 8), Kozeluch (Teldec 8573-85495-2), or Kraus (vol. 1 Capriccio 10 396, vol. 2 Capriccio 10 430) – or the pre-romantic emotional depths of some of Mozart’s slow movements. By comparison Dittersdorf sounds often well-mannered and superficial – music for the aristocratic salon.

Is it the interpretation of Uwe Grodd? Maybe. Trying to imagine what Concerto Köln might have done with the same music, with Grodd the edges seems somewhat rounded and dulled. Couldn’t the Allegro of Sinfonia in G minor have been even more driven and ebullient? And must the Minuetto of Sinfonia in F major be so square? I wonder why Concerto Köln never made a CD of Dittersdorf, it would have seemed an obvious continuation of their numerous recordings devoted to the “minor” composers of that era.

But maybe there are objective reasons after all for Dittersdorf’s failure to make it through the gates of posterity. Again, it doesn’t mean that the music isn’t pleasant and entertaining. But unless you are a real specialist of the period, I’d recommend first the recordings of Concerto Köln, they generate more excitement. And for Dittersdorf, I’ve found more enjoyment in Grodd’s CD of titled symphonies, see link above. TT 70:28, no complaint on that front, and, as I transfer this review from Amazon.com (July 2017), the CD is offered quasi gratis on the various Amazons, so there’s no big risk taking there