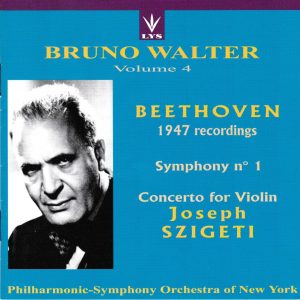 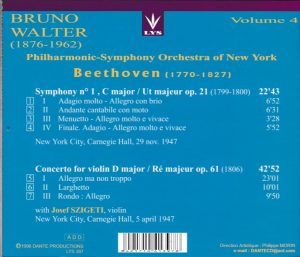 Forget the great names – the interpretations are nothing special (but the liner notes are great)
Originally posted on Amazon.com, 27 December 2009

The liner notes to this Dante/Lys CD, volume 4 of their Bruno Walter edition, are exceptionally informative. They consist of a lengthy bio of Walter, followed by a presentation of his longstanding relation with the New York Philharmonic (which developed between 1941 and 1960), and by an article on his recordings of Beethoven’s symphonies. Since Dante is now long gone, I’ve uploaded them (link will open new tab). Prior to his first Beethoven-New York recordings (begun in 1941 with the 3rd and 5th, and followed by the 8th in 1942), Walter had recorded only the 6th, with the Vienna Philharmonic in 1936. The American Columbia cycle was interrupted by the war and the recording strike staged by the American Federation of Musicians, and resumed in 1947 (it was actually started over from scratch, with only the 8th Symphony not re-recorded), with the Violin Concerto (April 5) and the First Symphony (November 29) featured here. The later stereo cycle, through which Walter’s Beethoven is mostly remembered, was begun in 1958-9 with a pick-up West Coast orchestra called the Columbia Symphony Orchestra. Add to that (the liner notes are silent about the Concerto) that Szigeti and Walter had already recorded the Concerto in London, in 1932, with the so-called “British Symphony Orchestra” ( 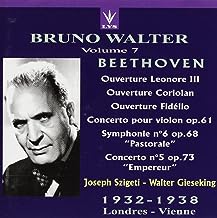 So much for the biographical facts. What about the interpretations? Well, forget the great names, just listen to the music. I find them nothing special.

In fact, Walter’s overall approach to the Symphony hasn’t changed much over the years, and the 1958 stereo version is remarkably similar to this earlier one – but with much better sound, and even sometimes overbearing bass. Earlier and later, Walter sets off with a brisk “adagio molto” introduction to the first movement (but at a tempo actually fairly close to Beethoven’s metronome mark – added, as is famously known, years after the composition), and he launches into the main section with dynamism and power, only to slow down and mellow in the second theme – Walter’s humanity and lovingness at play, but I find that it stems the forward momentum and deprives the symphony of some of its youthful brashness. In 1947 the New York strings’ staccato articulation also leaves much to be desired, again robbing the music of some of its snap. Likewise the second movement is taken not as the written “andante con moto” and at the forward-moving tempo indicated by Beethoven’s metronome, but as a kind of slow Sarabande, and Walter legato-izes Beethoven’s staccato violins in the process. Again the finale (Walter takes the repeat), without actually lingering, is taken at a more relaxed tempo than what Beethoven indicates, conveying a laid-back and amiable mood rather than the youthful brashness the New Yorkers will bring to it 16 years later under Leonard Bernstein’s baton 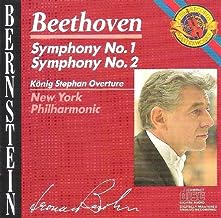 , and again the strings’ lack of real staccato articulation in 1947 works to the same effect; but the New Yorkers compensate with plenty of muscle. Walter in stereo with the Columbia Symphony is here even more laid-back (slightly) but much better recorded (timpani still muffled in some spots, though), more weighty perhaps but slightly less muscular in the accents, and the orchestra plays with much better (although not always faultless) articulation. Where Walter HAS changed over the years is in the menuetto, where he later applies the same mellowing and slowing down process as in the other movements; in 1947 he is full of vigor and forward movement, even in the trio.

Conventional wisdom has always been that Walter’ earlier recordings were, all considerations of sonics aside, interpretively better, because the New York Phil was so much better than the Columbia Symphony. I don’t hear that in the First Symphony, on the contrary: first, the sonics make a HUGE difference and second, the New Yorkers in 1947 are nothing to rave about, the Californian musicians play with much more precision. Interpretively, the later version is also marginally more “Walterian”, e.g. imbued with the character so associated with the conductor: amiable, loving, human. Whether this is the most faithful representation of Beethoven’s intentions is another matter. So I feel that Walter is here is better served by his stereo remake, and the earlier version is only for the diehard Walterite.

Dante-Lys’ transfers have reduced surface noise to a minimum, but the orchestral sound is somewhat muffled and generalized, with instrumental details lost in the process, especially the timpani which sound like a vague rumble.

I wonder why this 1947 recording of the Violin Concerto has enjoyed such a reputation. Do people just look at the great names and don’t listen? The basic musical values are OK, very similar to those of 1932, with tempos that are moderate but well within the norm of those and of later days, serving an approach that is overall broad and sweetly lyrical rather than powerful and swiftly-moving as Heifetz and Toscanini in 1940 (RCA GD 60621, Toscanini Collection vol. 41, barcode 090266026128, with Piano Concerto No. 3 with Rubinstein 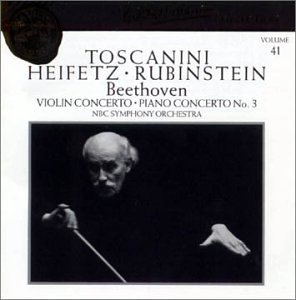 ). But am I the only one to hear that Szigeti’s tone is ordinary at best, without any tonal beauty, and often disagreeably sour and wiry (strangely he is better in the sixteenth-note runs than in the more lyrical passages), and that his reading is riddled with small blemishes and finger slips (I’m not sure what it is that he plays at 4:41 into the first movement, but that grace note Beethoven certainly did not write)? So what’s left? Walter’s fine muscularity in the orchestral tuttis – an improvement from his mellow and rather undisciplined 1932 account, which went in fits and starts – and the cadenzas: uncredited, but they are Joachim’s (with a cut at the end of the big one for the first movement), which had more currency in the early days of recording than today, not very Beethovenian, but great and original, the kind you might have expected of Ysaye. Here Szigeti is great, free of the intonational problems present in the rest of the recording, and this is definitely something to hoard from the 1947 version. But overall, and despite Walter’s more quirky and mellow conducting, the 1932 version is a better representation of Szigeti’s art and greatness. As I said the basic conception is the same, but in Dante’s transfers, the sound is as good as the later recording, and Szigeti’s playing has incomparably more tonal lustre.