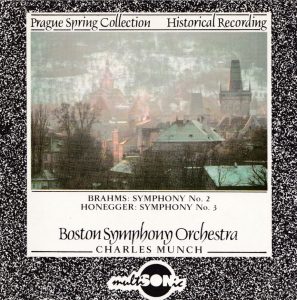 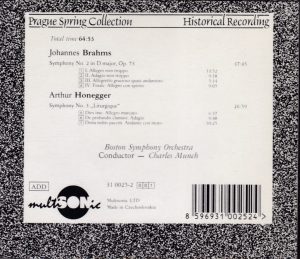 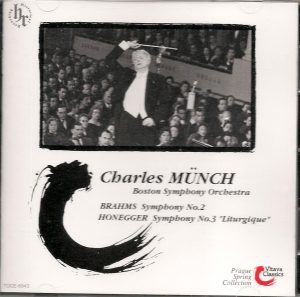 Just a partial review of Munch’s Honegger Symphony “Liturgique”. It is an essential addition to the discographies of both the conductor and the composer.

With Munch being (with Serge Koussevitzky, Paul Sacher, Ernest Ansermet and, in the early 1950s, George Tzipine) one of the great early champions of Honegger and having premiered the Third Symphony in Zürich in 1946, and with Symphony “Liturgique” – based on the number of recordings – one of Honegger’s most popular works (for whatever THAT is worth – other than Pacific 231 no Honegger composition is truly “popular”), it seems incomprehensible that the Alsatian conductor was never asked to record it in the studio, not in Boston, not in Paris (he did the 2nd Symphony three times, the 4th and the 5th once). So it is a minor miracle that this live recording exists at all, completing Munch’s complete cycle of Honegger’s symphonies (there is also a 1962 live of the First Symphony with Orchestre National on a lavish 2-CD set from Disques Montaigne, TCE 8730 – but, incomprehensibly again, no Munch recording of Pacific 231 or Rugby). It was made on September 11, 1956, on the occasion of a European tour with the Boston Symphony Orchestra which led them to Prague. The same concert opened with Brahms’ Second Symphony (which Munch and the BSO had recorded for RCA less than a year before, on December 5, 1955). The invaluable online Archive of the BSO shows that Munch had given the Liturgique in Boston in April of the same year, 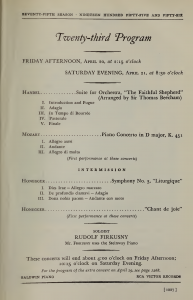 and that the only other time he had played it with the orchestra was in November 1947, shortly after the premiere, as guest conductor. Maybe that indicates that the conductor wasn’t too fond of the work. During his tenure at the helm of the BSO, he programmed many times other symphonies of Honegger, especially No. 2 and No. 5 (which he premiered in Boston). And it’s tempting to think that programming the 3rd in the 1955/56 season had something to do with the composer’s recent passing (November 1955). Note that, some 25 years after this Multisonic release, the label Yves-St-Laurent from Quebec published two other live recording of Munch conducting the Liturgique : one from 26 January 1947, with the New York Philharmonic, on YSL 166 78 “Munch vol. 2” (2013), and the other that Boston concert from 21 April 1956 referred to above, on YSL 312 T  “Munch vol. 8” with “Chant de Joie” (Munch’s only recording of that piece so far). Those CDs can be purchased only from the label’s website. 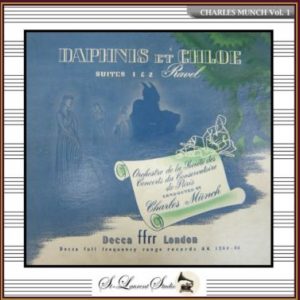 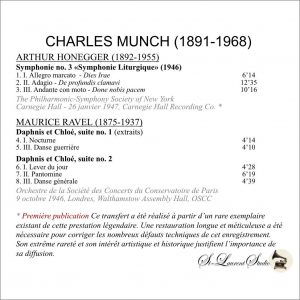 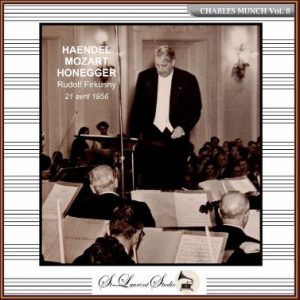 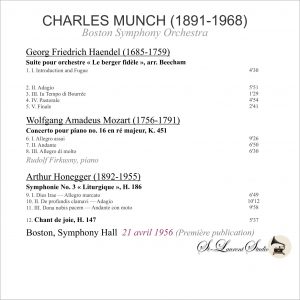 Given the circumstances, any document of even mediocre sonic standard would have been a major document on Munch and Honegger, and one could harbor fears about whatever recording equipment and standards were available and prevalent that side of the Iron Wall in 1956, so I am very happy to report that the recording sounds good, a little distant perhaps but with lots of instrumental details coming through (and great presence and impact of the snare drum!). The BSO is spotless, playing with great virtuosity and discipline, and Munch conducts them, in the first movement, with an angry urgency if not quite reaching the level of unleashed fury of Serge Baudo four years later – again in Prague, but with the Czech Philharmonic, the first leg of his complete cycle for Supraphon – or the brassy brutality of Mravinsky with his Leningrad players, live in 1965 (Melodiya).

I find the slow movement one of the weakest of Honegger – he himself said it had given him much trouble, trying as he was to develop a melodic line without using the customary methods and formulas, one that would “go forward without looking back”, extending “the initial curve without repetition or stops”. But where Mahler masterfully succeeded, especially in his 9th symphony (and I’m bringing up Mahler because, as laid out on the score, Honegger’s orchestration is very evocative of Mahler’s), to my ears Honegger fails, because his material and moods sound naïve and tritely pastoral in the manner of the Christmas Cantata (“how hard it is to put a prayer without hope into human mouths”), making the movement seem overlong and somewhat diffuse – and Munch must have thought so as well, since he practices a small cut of 13 bars at 7:18. Praise him also for adopting a tempo more flowing than the composer in his circa 1948 recording for French Decca (see my review of Music & Arts CD-767) and, through his tempo flexibility and ability to generate tension from his players, making much more sense and impact of the more somber climax that develops from 4:00 to a little before 6:00. But it is really Munch’s Finale that is unique, and uniquely typical of him, taken at a MUCH faster tempo than Honegger’s indicated 88 quarter-notes per minute, closer to 112 (in his own recording Honegger took it at circa 100, and his biographer Harry Halbreich mentions a manuscript performance note in which he suggested a tempo of 112), and seizing every opportunity to accelerate even more, reaching a tempo of circa 138 just before the “pesante” passage at 5:24. The music develops great fire and tension, if not the kind of implacability conveyed by Karajan’s slower tempo (in fact spot on Honegger’s metronome) and massive dynamics (and for a more in-depth survey of the issue of tempo in the Finale, see my review of Jean Fournet‘s very unique interpretation in 1993, originally on Denon COCO-78831). I doubt very much that it is the solo cello rather than the full section that is underpinning the beautiful violin melody at the beginning of the conclusive Adagio 5:59 – the solo you can hear very distinctly a little later, at 7:47, dialoguing with the “Bird-Theme” played by flute. Small detail.

Not a first choice then in “Liturgique” – that would be the studio versions of Järvi, Jansons, Baudo or Karajan, for instance, or Mravinsky‘s live version from 1965 – but, as I said, an indispensable acquisition of the Honeggerite and/or Munchite.