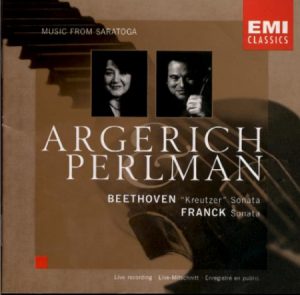 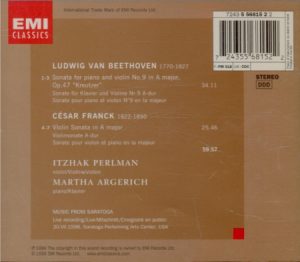 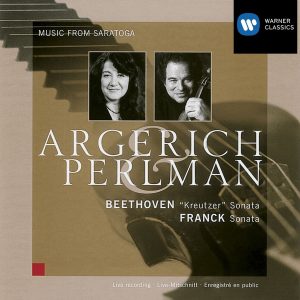 Reissued by EMI Classics in “Martha Argerich Edition Chamber Music”, 094014-2 (2011), barcode 5099909401426, an 8-CD compilation of previously released recordings, most from EMI’s Martha Argerich & Friends live from Lugano’s series. See review on Musicweb-International for details – but no indication of the sources. For a complete survey of the latter, see my review. Re-released by Warner Classics with updated logo. 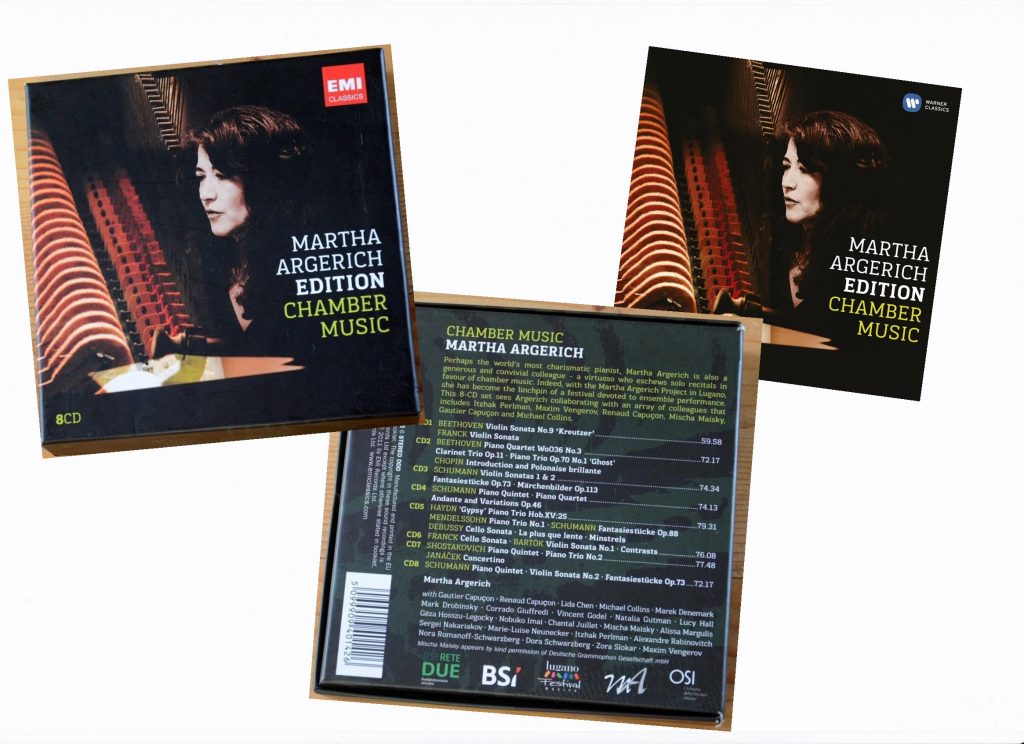 Fussing over details at the expense of the whole will only distort the essence of the music
Originally posted on Amazon.com, 4 May 2008

You will find many rave reviews of this recording online, so here’s the dissenting view. OK, sure, this is a live concert (recorded on July 30, 1998 at the Saratoga Performing Arts Center), and in such occasions there is often a measure of give and take and risk-taking that may step over the line. But I think it is also a problem with Argerich, very similar with the piano to an interpretive quirk often remarked with Anne-Sophie Mutter on the fiddle: they want to charge the music with so much expression and make it such a “personal” statement that they start fussing over details and tampering with the written score. Does Argerich find the gently rolling 9/8 rhythm written by Franck in the first movement too simple and predictable that she needs to change the first bar into a binary dotted eighth-note sixteenth-note? And is it because she’s got free rein (the first four bars are for piano alone) that she takes a tempo twice as slow as Perlman’s when he finally enters? Sure, it establishes a nice, dreamy mood, but also a jarring discrepancy with Perlman’s entry. Then when the music gets a bit tougher (1:36, “a tempo sempre forte and largamente“) and the piano is again left alone, rather than maintaining a steady pulse, Argerich starts brutalizing the lines as if it was, I don’t know, Schumann’s Piano Sonatas or Phantasie (which she has done so well) or already the Sonata’s second movement. And as the two partners approach the climax around 3:50 they accelerate significantly, rather than just building tension through dynamics. YES, Franck’s music does begin very simply, and that doesn’t make it less beautiful and valuable, and you don’t need to toss it around to make it expressive. I’m all for probing beneath the surface, but trying to unveil details that simply aren’t there will only distort the piece’s essence. Perlman and Argerich then hurl into the second movement at a faster pace still than 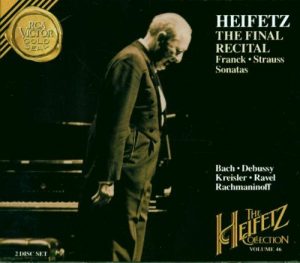 EMI References reissue, “Jascha Heifetz Recital”, EMI 7 64929 2, barcode 077776492926), and with much turbulence, especially from Argerich – a little too much so I think for the music’s underlying classicism, but after all this is the turbulent movement and it can take it. I wouldn’t say that Perlman leads here, but he bravely rides the storm as very few could. Yee-haah! At the beginning of the third movement Argerich does it again, changing the rhythmic values – and throughout tempos are so distorted and played accordion with, it must be one of the ugliest readings of that movement I have heard. I had thought Heifetz was as fast as it would get – true, by a second (again Heifetz’ farewell concert in 1972 is a few seconds faster than his 1937 recording), and Heifetz at least was consistent. The passage in sixteenth-notes starting at 2:26 feels rushed rather than flowing, and the ensuing meditative section at 3:23 exudes little sense of repose: anguish rather than meditation. I guess if you want to say something favorable you might argue that the approach exudes a welcome dramatic tension and Romantic turbulence. I s’pose the finale can take that kind of urgent approach and Argerich’s Beethovenian (or is it Brahmsian?) muscularity – it highlights its exuberant, even turbulent joy. But again the pianist seizes any opportunity for vulgar spotlighting, such as at 1:55 when the left-hand intones the theme: rather than lovingly caress it, she just pounds – hey, look at me y’all, I’m there, it’s me! Well, yes, she’s there, and in the face of that kind of presence the missed chords at the end that some commentators have remarked are NOT what matters.

Needless to say, mine is a minority view: judging from the applause, the audience seemed very, very happy. I do prefer the approach in Beethoven’s Kreutzer Sonata, but that may be because I have not done the same kind of thorough comparative listening as with Franck. Incidentally, Warner  released in 2016 the rest of that July 1998 concert, Schumann’s Violin Sonata No. 1, together with new recordings (made in Salle Colonne in Paris in March 2016) of Bach’s Violin Sonata No. 4 in C Minor, BWV 1017, Schumann’s Fantasiestücke Op. 73 and Brahms’s Scherzo from the Sonatensatz in C minor (the ‘F.A.E. Sonata’), barcode 190295937898. 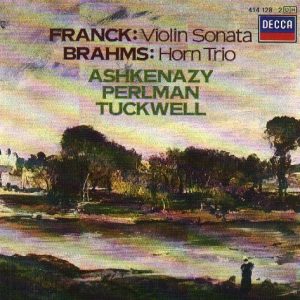 and of the complete set in 1988 on Decca Ovation 421 453-2 barcode 028942145320), and they remain the classics. This recording seems to me a showcase for the pianist rather than the fiddler – but it is a tribute to Perlman that he isn’t dwarfed in the process. So this disc is really for the admirers of Argerich, and a testimony of her art – warts and all.