One of the most substantial and attractive reissues of Honegger performing Honegger
originally posted on Amazon.com, 4 August 2013, update for repost, 1 February 2018

Early recordings of Honegger performing his own works, from the 78rpm era, are now out of copyright protection and can be reissued by whoever has a copy of the original discs – and have been. This disc published in 2008 by the French Alpha, apparently the label from the “Discothèque Centrale de Radio France”, taps from the resources kept at the music library of the French public radio. It largely duplicates the contents of Music & Arts’ own reissue from 1993 (CD-767), sharing Pacific 231, Rugby (the two recordings were made in 1929 – some sources say 1930) and Symphonie Liturgique, a recording from circa 1947 (it received the French Grand Prix du Disque in 1949) with an anonymous orchestra (I’ve read some French sources, which I can’t locate anymore, claiming it was Belgian, but the great Honegger biographer Harry Halbreich, so detailed about the composer’s daily events, is curiously silent about this recording. The original French edition of Halbreich’s biography was published by Editions Fayard in 1992, ISBN 2-213-02837-0, English translation published by Amadeus Press, 2003, ISBN-10: 1574670417). It was published on 78rpm Decca GAG 15004-7 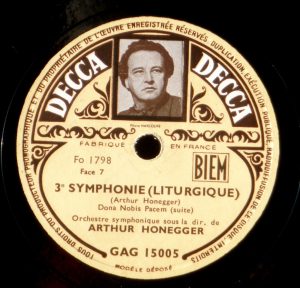 and, to the best of my knowledge, never reissued on LP. The great and very thorough Decca discography of Philip Stuart, the latest version of which is hosted on the website of Eloquence Classics, doesn’t mention it, and in a private correspondence Philip told me that he left it out because he has very little information about it, as with many other issues of that era from Decca France. 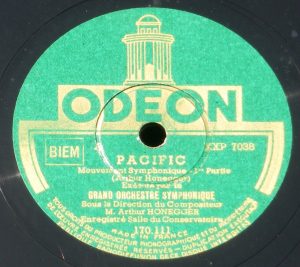 , American Columbia for Music & Arts (G-67998-D and G-68018-D). Music & Art’s transfers have left more surface noise, but those of Alpha are slightly more muffled. Alpha is the only transfer I know of Pacific that doesn’t botch the 78s side joint at 3:29, where obviously, on the original 78, side B repeated the final bar of side A. Nobody will hear it without a score (and even then…), but Music & Arts just spliced both sides together, adding a full bar of music. But Dutton’s transfer (CDBP 9764, from 2006) botched the splice even more.

The same characteristics and differences are perceptible in the Symphony, but they are even more startling, because the copy used by Music & Arts appears to have been badly worn and scratchy and they made little effort to hide the scratches, making the sonics seem easily 20 years older than their circa 1947 vintage. Alpha’s copy was much better or (and) they filtered more, almost eliminating any trace of surface noise, but again the sonic result is more muffled than on Music & Arts, while still affording a slightly more comfortable listening experience.

Whatever your choice of transfers, be aware that the huge sonic limitations of the 1929 recordings can make these versions of Pacific and Rugby no more than documents: Honegger’s dense and intricate orchestration calls for modern stereo, and it is only with Bernstein‘s 1962 recording that everything could be heard for the first time (paired with Milhaud: Les Choéphores and Roussel: Symphony No. 3 on Sony Masterworks Heritage MHK 62352 or on Bernstein Century: French Masterpieces, Sony SMK 60695). Nonetheless, Honegger’s conducting offers unique interpretive insights. Nobody like Honegger has the opening sforzando string harmonics of Pacific phrased with such a sharp bite. Very few (Tzipine in 1953, reissued on French EMI’s Les Rarissimes de Arthur Honegger, 2005) have the stopped trumpets’ staccato accompaniment figure at 2:25 (measure 109 and following) played with such a nasty snarl. And the piccolo flutes at 2:36 are piercing. But, other than those details, there is one thing that Honegger shares with his predecessor Piero Coppola who had made the premiere recording in 1927 (reissued in 1998 by Dante on their Collection Piero Coppola, Vol. 3 – La Musique Française XXe Siècle), and that no subsequent version has quite recaptured: propulsion. By his own description the locomotive that Honegger had in mind (describing in musical form not so much its actual sounds, as the physical impression conveyed by the machine) was a “heavy-weight, high-speed” engine, and he also talks of the “lyrical state, the pathos of the 300-ton train hurled in the middle of the night at 120 kilometers an hour” (yes, in 1921, that was fast). Later versions concentrated more on the weight and on bringing out all the details of the orchestration. They all emphasize, for instance, the machine’s slow rolling into motion – but not Honegger, with him the energy is more powerful than the forces of gravity. Typically, Coppola and Honegger completed their ride in, respectively, 5:54 and 5:56. No subsequent version that I’ve heard made it under 6:00 (Bernstein), and none more acutely than Coppola and Honegger made Pacific sound so close to Mossolov’s Iron Foundries or the final Danse Sacrale from Stravinsky’s Rite of Spring.

Likewise, despite all the imperfections of the instrumental performance (with in particular a tuba way out of its depth – literally – at 4:46) and lack of precision in orchestral playing, the same dynamic propulsion is at play in Honegger’s conducting of Rugby – although, here, Hermann Scherchen in 1954 on Westminster displayed even more.

Honegger’s recording of “Liturgique” is a touching testimony also because the composer announces the title of each movement (there were others, and more substantial interviews of the composer in the early LP era, none reissued on CD). The composer conducts with a sure hand and the orchestra is responsive, playing with great vehemence in the violent first movement, “Dies Irae”, and the required bite and nastiness in the implacable and ominous march of the Finale (“…the relentless progress towards the slavery of man… the rise of collective stupidity… the march of the robots against civilized man, holder of a body and a soul… The revenge of the beast against the spirit… the imbecile march of a long flock of mechanical geese waddling in rhythm“…). It is interesting to note a bass drum thwack at 3:42 in the Finale that is not indicated in the study score – but, except for Mravinsky, Jansons and Fabio Luisi, everybody plays it, although as a muffled and almost indistinct thud rather than the dry and resounding thwack of Honegger, much more effective. Another interesting observation is how usually inobservant Honegger the interpreter is of the composer’s metronome indications – he’s at the lower end of his 70-80 half-notes per minute in the first movement, but significantly above his 88 quarter-notes for the implacable and ominous march of the Finale, closer to 100 (in his biography Harry Halbreich mentions that in an unpublished, manuscript interpretive note, Honegger suggested a tempo of 112). And when comes the conclusive Adagio, at 7:16, he is at circa 35 quarter-notes/mn, WAY below his indicated 58. No complaint here, the musical result is beautiful. But I find that the interpreter does shoot the composer in the foot by adopting again a very deliberate and pedestrian tempo in the slow movement, about ten beats under his own metronome mark of 54 quarter-notes. I find the slow movement one of the weakest inspirations of Honegger – he himself, quoted in the liner notes, said it had given him much trouble, trying as he was to develop a melodic line without using the customary methods and formulas, one that would “go forward without looking back“, extending “the initial curve without repetition or stops“. But where Mahler masterfully succeeded, especially in his 9th symphony (and I’m bringing up Mahler because, as laid out on the score, Honegger’s orchestration is very evocative of Mahler’s), to my ears Honegger fails, because his material and moods sound naïve and tritely pastoral in the manner of the Christmas Cantata (“how hard it is to put a prayer without hope into human mouths“), making the movement seem overlong and somewhat diffuse. But the interpreter’s sluggish pacing makes it even more naïve and overlong, added to the fact that, kept at the same sluggish tempo, the climax that develops from 5:19 to circa 7:40 is bled of its tension and hardly registers. That said, Karajan (on DG 20th Century Classics 423 242-2 or DG “The Originals” 447 435-2), at an even slower tempo, brought it off beautifully in 1969; but the sonics made a major difference in the impact it conveyed.

Other than the sonics of Liturgique, one decisive factor in favor of Alpha or Music & Arts will be the complements. Music & Arts has more orchestral Honegger conducted by himself (or by Rhené-Bâton in the case of the early symphonic poem Le Chant de Nigamon). I find this all-orchestral Honegger program more coherent than Alpha’s program of miscellaneous songs. Nonetheless, these are highly attractive as well for the Honegger aficionado and collector of historical recordings. They were recorded in 1946-1947 (except for the concluding two out of Trois Chansons de la Petite Sirène, 1932), they all feature the composer, either at the piano or conducting, with singers closely associated to him, Eliette Schenneberg, Madeleine Martinetti, Dolores de Silva and above all Claire Croiza, Honegger’s great love story before his marriage to pianist Andrée Vaurabourg and the mother of his out-of-wedlock son. His songs are one of the least frequented corners of Honegger’s output, making this selection all the more interesting. Some sound like Ravel could have composed them (the gloomy “Chansons pour voix grave“, Songs for low voice – the first one is played twice, both with orchestral and piano accompaniment -, the Jewish psalm Mimaamaqin), some Poulenc (Alcools, after the poems of Apollinaire, indeed a favorite source of Poulenc), some others Debussy (Automne, one of the Chansons pour voix grave, track 18, or the two Chansons de la Petite Sirène).

Difficult choice, then, between Alpha and Music & Arts – now that I have them, I’m keeping both. Disc’s TT won’t be the decisive factor: 72:11 for Alpha, 72:08 for Music & Arts. Price might be, but these things go up and down on the marketplace. Alpha’s liner notes come with an English translation, at best awkward (“in the 78rpm era” becomes “during the period when the norm for recordings was 78rpm” – but if that was the “norm”, what might have been “the exceptions”? cylinders? player pianos?), but often worse than that (“Honegger’s music is played the world over“, for “throughout the world“, or “all over the world“) and they are riddled with embarrassing errors. They say in the same sentence that Honegger “was to know the advantages of electric recording” and that, in 1929, he was invited to record Pacific with an orchestra of 30 players, “the maximum who could be placed around the recording funnel”. But the recording funnel is acoustic recording, and by 1929 that was ended and replaced by electrical recording – even in France! The annotator attributes the 1929 recording of Chant de Nigamon to Honegger, but it is Rhené-Bâton. He claims that Koussevitzky conducted Symphonie Liturgique within a year of its premiere under Charles Munch, as part of the 17 performances documented by Honegger, but while the info about those 17 performance seems to come from Halbreich’s biography, Halbreich doesn’t mention a Koussevitzky performance (annotator seems to be confusing with the 2nd Symphony).  [And a post-script from February 2, 2018: the Boston Symphony Orchestra online archive now allows to confirm this: from July 24, 1947 to December 14, 1948, Koussevitzky gave 15 performances of the 2nd Symphony, and he also performed the 4th twice in April 1949, but never the 3rd, and never the 5th]. Honegger didn’t suffer a “serious stroke” in 1947, but a massive and crippling heart attack (“coronary thrombosis”). The film director is Abel Gance, not Gange (but that’s a typo from the English translation). The notes mention Honegger’s recording of excerpts from his operetta Les Aventures du Roi Pausole “which feature on this CD” – but they don’t (the Overture and Ballet, but not not the few arias recorded on the same occasion, are on the Music & Arts disc). Of Claire Croiza the notes say that Honegger “had met her in 1923 and particularly the clarity of her diction” – that’s the badly mauled translation from what should have been “he had known her since 1923 and particularly appreciated the quality of her diction” – and that’s all they say about the Croiza-Honegger relationship: this is error by omission. The Music & Arts liner notes, by William Malloch, are informative, factual, no-frills.