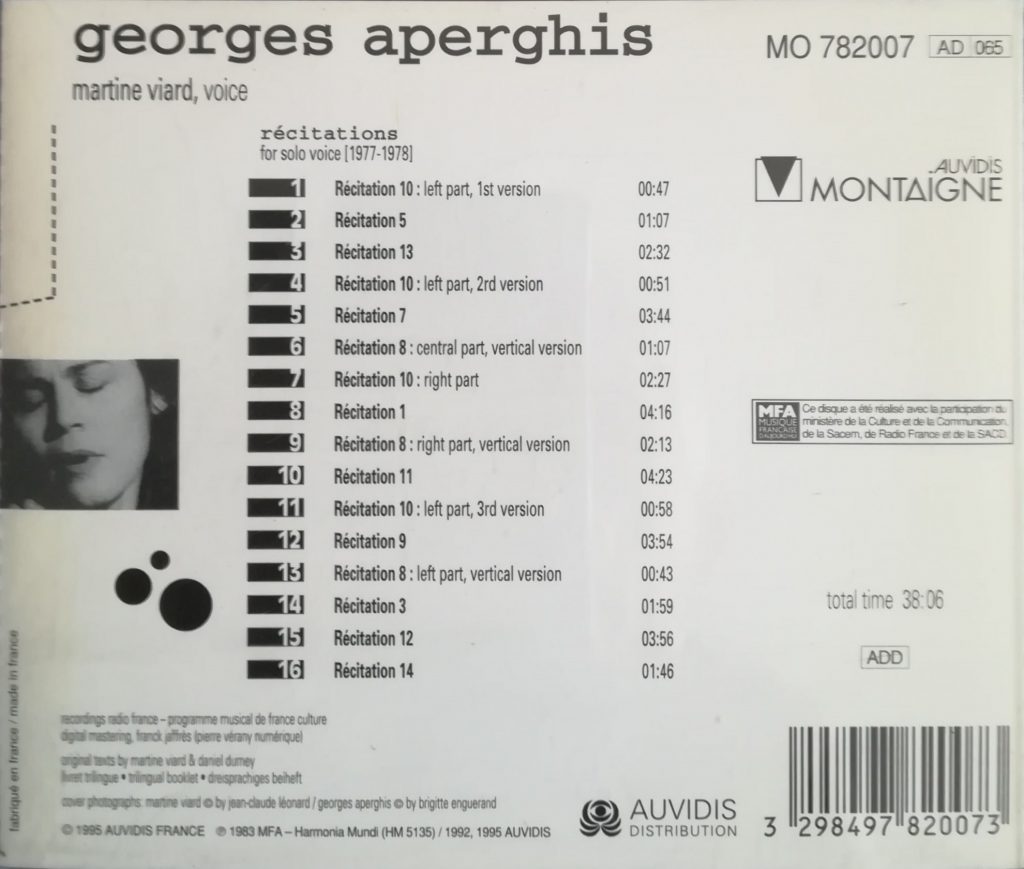 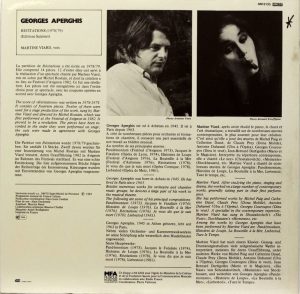 Witty, fun, a piece that deserves to be ranked among the major works for contemporary vocal technique
Originally posted on Amazon.com, 28 April 2009, substantially reorganized for this re-publication

Georges Aperghis is a composer born in Greece in 1945 and, like Xenakis, he established early on in France, where he was one of the main inventors of “théâtre musical”, music theatre, in the early 1970s, and still is today one of its foremost exponents. But he’s composed full-scale operas as well, like Tristes Tropiques after Levy-Strauss (1995, premiered at the Strasbourg Opera) and Avis de Tempête (2004, Lille Opera).

As for performer Martine Viard, though nowhere as famous as the late Cathy Berberian, she is an actress-vocalist of the same ilk, sharing the same attitude and exploratory mind in relation both to the many possibilities of the human voice and the old traditions of opera. She performed many Aperghis music-theatre compositions, as well as some by Kagel. Cage and Stockhausen wrote for her. It is while on tour on one of Aperghis’ music-theatre pieces, in the late 1970s, that he composed the 14 Récitations for her.

Récitations are typical Aperghis, and possibly the summation of his art in composition and of what makes him so unique, so inventive and so fun: they are speech, spoken language, made music. No text, only phonemes, shards of texts, stuttering, obsessive repetitions, huge leaps, using the full gamut of vocal ranges. One of the strongest characteristics of the compositional art of Aperghis, it seems to me, is that he starts from the spoken language, considered not for the meaning it conveys but for the elements of “music” it contains, and then amplifies these elements, without actually making them into songs: it’s more his own kind of Sprechgesang, or the voice treated instrumentally (but conversely, in many of his instrumental compositions, his instruments are very “talkative”). Récitations are marvelous inventions in contemporary vocal virtuosity, they are witty and fun, they are varied and employ the full range of vocal techniques and expression – a kind of modern Paganini Caprices for voice. Ligeti’s Aventures and Nouvelles Aventures may come to mind, as well as Berio’s Sequenza for voice and A-Ronne.

So the only regret is that the recording is LP-tailored and limited to 38 minutes. In fact Viard didn’t record all the Récitations: there are fourteen of them, and for reasons unknown, she leaves out 2, 4 and 6. On the other hand, she repeats 10 three times (widely varying interpretation) and 8. In at least some of the Récitations the score is geometrically disposed in columns on the page, and the singer can perform them reading horizontally or vertically; the booklet of the original CD release, which is what I have, nicely reproduced the score to Recitation 8 consisting of three colums, with each subsequent line of each adding a syllable (the right column actually ends – or rather, starts – with a cough and a sigh), in a manner reminiscent of the language games of George Perec and the Oulipo movement: Viard’s three versions present a vertical reading of each columns (but alas no horizontal reading of the whole). Likewise her fourth reading of 10 is actually of the right column.

Here is also the booklet’s reproduction of Récitation 14

Anyway, Viard having recorded what she recorded,  Montaigne/Audivis might and should have complemented it with something else. The 14 “Jactations” for instance, Aperghis’s similar work for solo baritone from 2001, would now be a perfect match, , but there are other earlier such pieces for solo soprano : “Six Tourbillons” (1989), “Cinq Calme-plats” (1992), both premiered by Viard, with so far as I know only Tourbillons was recorded, on the hard-to-find label La Muse en Circuit. They would have made a fine coupling. Frustrating.

In my opinion, this deserves to be ranked, with Berio’s Sequenza, among the major works for contemporary vocal technique, and I think the only factor that has so far limited its being recognized as such is that Aperghis works mostly in France, and that the piece draws on French language – rather than Italian or German or English. He needs to write versions in those languages, and since his website is easily accessible, I’ll suggest it to him. I also recommend Aperghis’ later “Sextuor -L’Origine des espèces“, a piece of music-theatre from 1993 in which he puts these vocal techniques to use in the context of a stage-work for 5 female vocalists and a cellist. And look at my other reviews of music of Aperghis, together with the CDs that I have but haven’t had time yet to review.