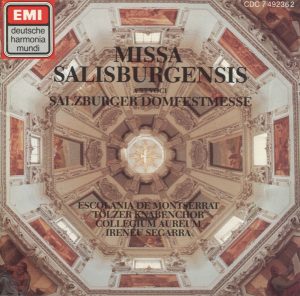 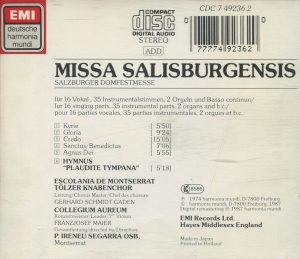 Recorded 8-10 August 1974 at the Salzburg Kollegienkirche 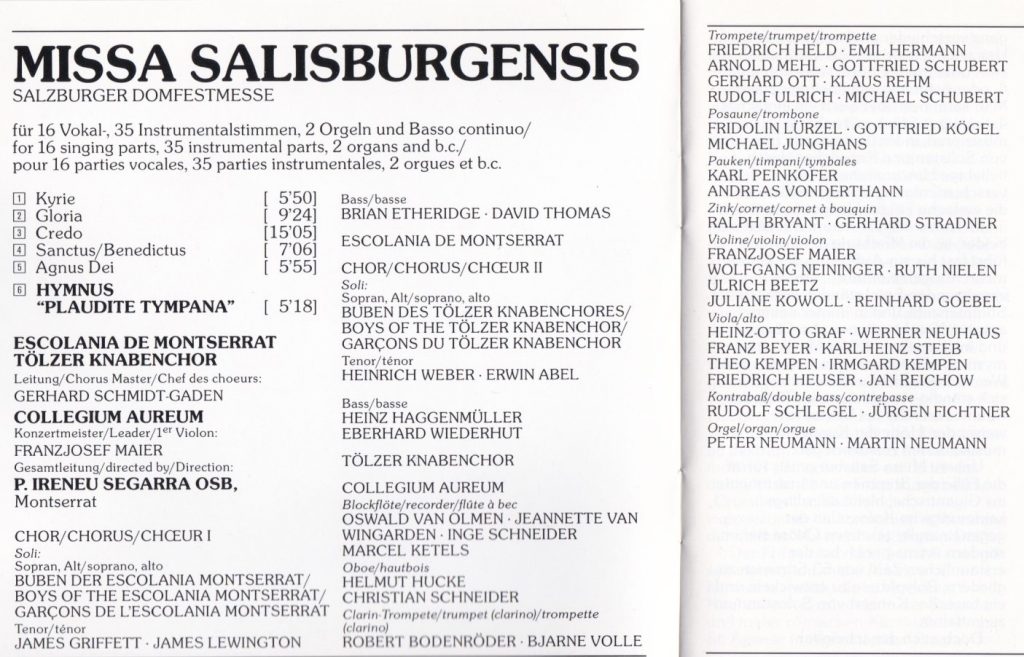 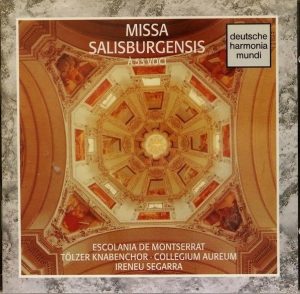 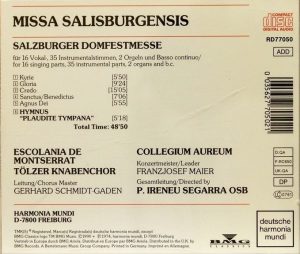 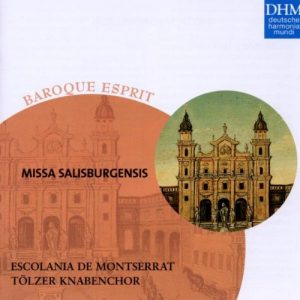 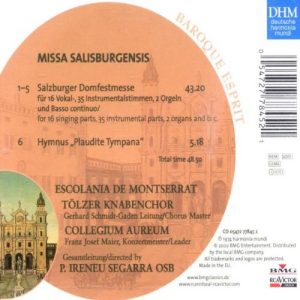 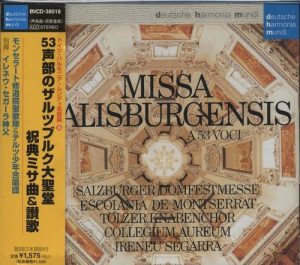 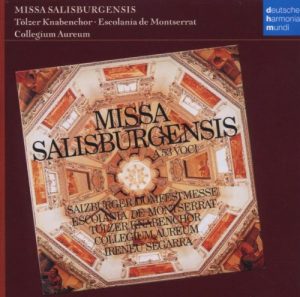 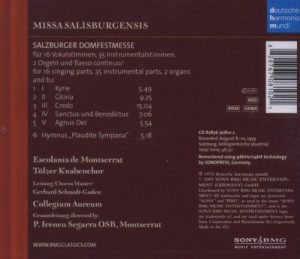 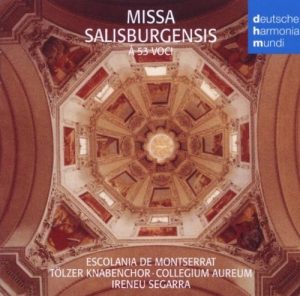 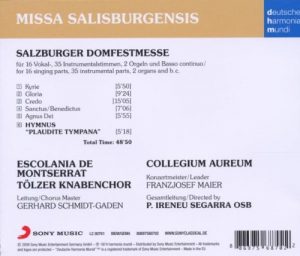 “Missa Salisburgensis”. The onlooker may be surprised that no composer name appears on the CD’s cover. The name “Benevoli” does show up as composer if you use iTunes, but this is not the case. As the informative liner notes explain, the score of the Mass and following Hymn were discovered in Salzburg in the 1870s, and the Salzburg archivist F.X. Jelinek inscribed on the first page of the manuscript :” for the consecration of the Salzburg Cathedral composed by Orazio Benevoli, 24 September 1628”. How did he know? In fact, he didn’t. He guessed, and he was wrong on two counts. For the consecration of the Cathedral, it was a 12-part mass that was performed, and “probably the work of the Court Kapellmeister Steffano Bernardi”, as opposed to this mind-boggling 54-part polychoral work (16 vocal and 35 instrumental parts, plus two organs and continuo) set in seven instrumental groups, presented on a huge score 80cm high and 57cm wide.

The manuscript is not, as was originally thought, the work of the original composer, but of a copyist whose work in Salzburg is attested in the second half of the 17th century. As to its composer, stylistic comparisons tend to rule out the actual Benevoli, and, when the recording was made in 1974 and the liner notes written, the names of Andreas Hofer and Heinrich Biber were mooted: both active as Hofkapellmeisters in Salzburg in the second half of the 17th century. More recent research tends to conclude for Biber – see the excellent Wikipedia entry for more (link will open a new tab), which go as far as to call the attribution “universally accepted”, and indeed the Mass and Hymn are now presented as Biber’s in all the recent recordings, although this is only a conjecture.

Whoever the composer, it is grandiose. Biber indeed comes to mind, and even the more grandiose moments of Bach’s Mass in B (but, to my ears, not at all Handel, although the early musicologists pointed to him, when they thought Benevoli had written “music of the future”). There is also great interplay between concertino and ripieno, soli and tutti. The one regret is not to hear it in the Salzburg Cathedral, it must be absolutely overwhelming. Who cares who wrote it (and who cares who wrote the plays signed “William Shakespeare”, what matters are the plays, not the person), it belongs to the great masterpieces of 17th-century baroque choral music. No mere talk: I’ve put my money where my enthusiasm is, and have just clicked on “buy” for two more recordings, those of Ton Koopman, originally on Erato 3984 25506 2 (1998) barcode 0639842550628 (conveniently reissued in 2015 on a Virgin twofer with Koopman’s 1994 recording of Biber’s Requiem for the same label, 4619536, barcode 0825646195367) and Musica Antiqua Köln – Reinhardt Goebel / Paul McCreesh on Archiv Produktion 457 611–2 (1998), barcode 028945761121 (there’s an SACD version, barcode 028947163220). There are two more, by La Stagione Armonica directed by Sergio Balestracci, originally on 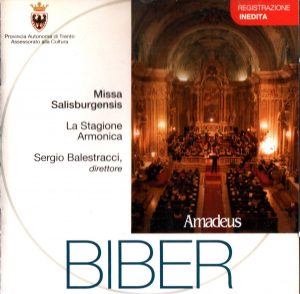 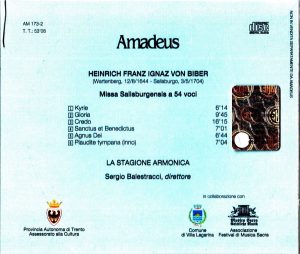 , reissued on SACD NCA 60192 (2008) barcode 4019272601927, and by Jordi Savall on SACD Aliavox AVSA9912 (2015), barcode 8435408099127. There’s also a very recent 2017 DVD from Naxos/Unitel, apparently filmed in the Salzburg Cathedral, by Collegium 1704 under Vàclav Luks, barcode 0747313539451 (blu-Ray version barcode 0730099006668). Thanks to the informed Wikipedia entry for pointing out that there was a premiere recording (still attributed to Benevoli), way back into the LP era, on Musical Heritage Society MHS 503 (link will open a new tab to entry on Discogs.com), and kudos to the path-openers. It is sold on eBay for those interested in the archaeology of interpretation. The liner notes also refer to a companion Missa Bruxellensis (kept, as the title indicates, in Brussels), also attributed to Benevoli by early musicology but also written down by the same copyist as the Missa Salisburgensis, and now, for the same reasons, also attributed to Biber (no English Wikipedia article, but see discussion here). Savall also recorded that one, Aliavox AV9808 (1999), barcode 7619986098081, and so far as I could ascertain it is the piece’s only recording.

I cannot at this point, without comparisons, assess the interpretive merits of the forces gathered in 1974 by Deutsche Harmonia Mundi around Ireneu Segarra. Collegium Aureum was one of the grand pops of period instrument ensembles, and I suspect much stride has been made in performance practice since, but at least I can say that the extraordinary beauties of the compositions come through, resoundingly. I’ll return.