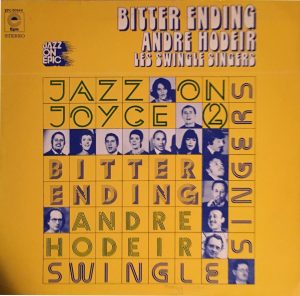 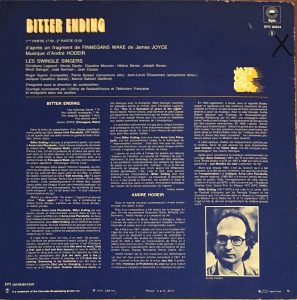 I don’t know if the ending was bitter, but it was ambitious
20 December 2018

There’s a certain irony that the last recording of the “original”, Paris-based Swingle Singers (in fact only four members were remaining from the original group that had recorded the chart-making “Jazz Sébastien Bach” at the end of 1962) should be titled “Bitter Ending”. I’m not privy to the internal affairs of The Swingle Singers, and I don’t know if there is a secret message there. But soon after, the group disbanded, and its founder, Ward Swingle, moved to London were a re-formed a new vocal octet with young English singers, first called “Swingle II”, “The New Swingle Singers”, “The Swingles”, before reverting to the original name “The Swingle Singers”.

André Hodeir (1921-2011 – link will open new tab to his entry on Wikipedia) was an esteemed French Jazz critic and composer, despite his classical training at the Paris Conservatoire (including with Messiaen as analysis teacher) and his first prizes in fugue, harmony and music history. “Bitter Ending” was never (to the best of my knowledge) reissued to CD, and has become a rare object. In fact I waited 5 years to  see it show up on eBay – and I was the only bidder (or should that be… “bitter” ? Sure, that’s “better”)… I had been able prior to that to find a digital copy, but in botched sonics.

“Bitter Ending”, premiered on July 31, 1972 at the Avignon Festival by the same performers who recorded it, is a jazz cantata after Joyce’s Finnegan’s Wake. 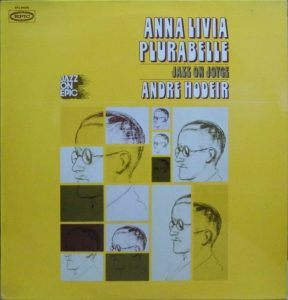 It is the sequel to another cantata written by Hodeir in 1966, “Anna Livia Plurabelle” subtitled “Jazz on Joyce”, for two vocal soloists and orchestra (Epic EPC 64695, also very rare, US edition Philips PHS 900-255 encountered more frequently on eBay;

recorded in 1966 “under the personal supervision of John Lewis” and a production of MJQ Music, as in “Modern Jazz Quartet”, but released only at the end of 1970, and awarded a Grand Prix du Disque in 1972; it was reissued at one point on Carlyne Music CAR 005 ).

“Bitter Ending” sets to music, mainly, the last part of Finnegan’s wake, the “monologue of Anna Livia”. The LP came with an insert, with text, very useful.

It isn’t clear from Hodeir’s liner notes if the jazz is totally composed or partly improvised: he talks about the technique of “simulated improvisation”, without further explanation. Further research indicates that “simulated improvisation” (the term was invented by Hodeir) is a composition process in which the composer indeed writes everything, but tries to compose in a spirit of improvisation, as if he were the improvising performer, then asking the performer to play his written part as if he were improvising it. Anyway, Bitter Ending sounds very composed and even ambitious, in a style straddling contemporary music and free jazz. The performers are great, and there’s even a certain perverse charm at hearing the French Swingles sing Joyce’s words with such heavily-tinted French accents.

Since the LP was never reissued to CD and is almost impossible to find, I’m going to prevail myself of the doctrine of fair use and upload my transfer here: Bitter Ending.

A good biographical article on Hodeir, with complete discography and catalog of his books.