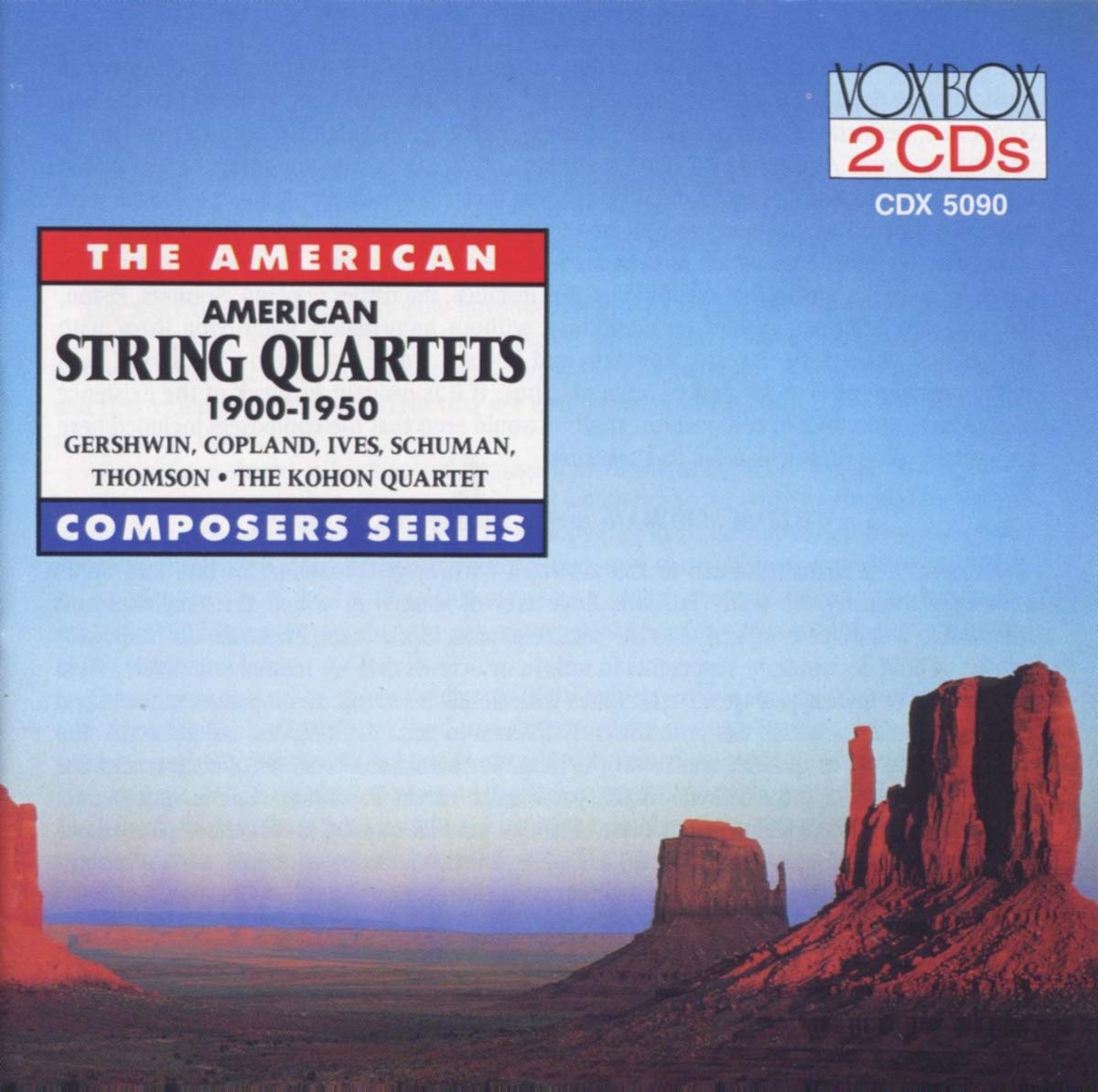 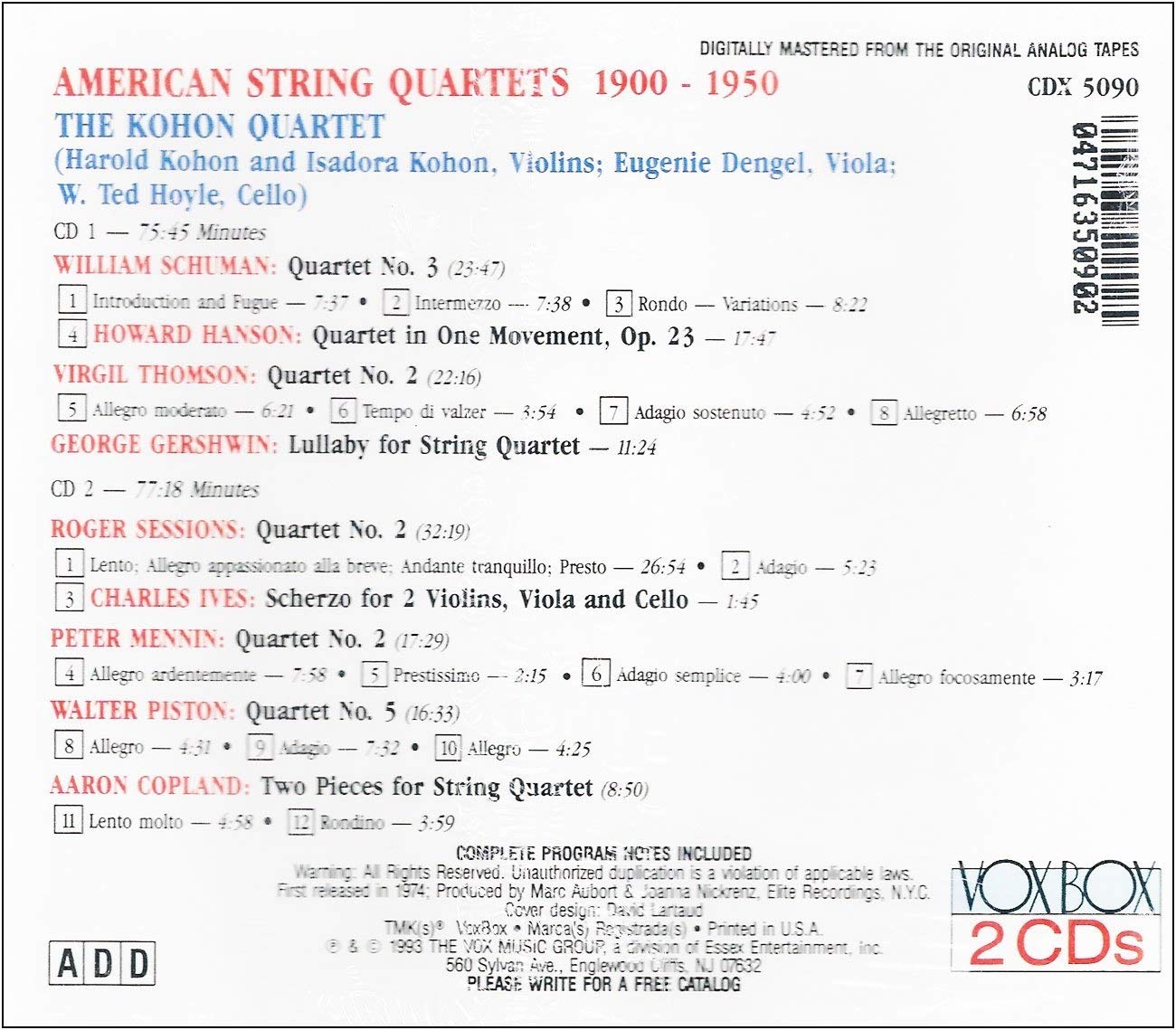 Better than serviceable interpretations in music that remains almost as rare on records as it was back then in 1974
Originally posted on Amazon.com, 16 January 2009

Vox was the Naxos of the LP era. They issued rare stuff, often played by performers that were not among the top drawer, and on pressings that were sub-par. But those LPs definitely filled gaps. With those CD reissues, at least the sub-par pressings are gone, and here, the 1974 recording sounds great, better than some of the competition from the digital era, despite a measure of background rumble. Still today, over 30 years later, the repertoire remains seldom recorded and highly valuable.

The set’s title isn’t entirely accurate, as it includes Quartets written in 1951 and even 1962, but this is of no importance, given the value of the compositions. All the hallmarks of the composers’ respective style are present: Ives‘ short Scherzo from 1903 is cacophonous, clustering and collage-like. Gershwin‘s Lullaby (1920) is a little gem: sentimental without being mawkish, and timeless; Brahms or Dvorak could have written it. Copland’s Lento Molto from 1928 is simple and sweepingly epic.

Howard Hanson‘s String Quartet from 1927 (four movements playing without break, here not cued: 3:30/10:04/14:20) comes as the big surprise. I’m rarely taken by Hanson’s Sibelian romanticism, but here, with the String Quartet’s leaner textures, I find his intense lyricism and sense of optimism in the fast movements winning. It may hark back to Ravel, but it points to Britten, really. It was written 14 years before Britten’s first.

On the other hand Virgil Thomson‘s 2nd Quartet is the big disappointment. I’ve never quite understood the stature of Thomson in the American music establishment. I suppose it had more to do with his qualities as a critic and an organizer than his talent as a composer. His works often sound to me as neo-romantic clichés of little value, and the Quartet is a case in point. It was written in 1931, and it sounds like it had been written by some epigone of Dvorak, when not Schubert. It should have been included in the companion Vox box set devoted to

“The Early String Quartet In The U.S.A”, VoxBox 5057, barcode 047163505720. If it had been written by a mid-19th Century composer, I would call it derivative. In the case of a 20th Century composer, I call it appalling. Why bother – to write such music, 30 or 50 years too late, and listen to it? But then, Gershwin’s Lullaby is so good, I don’t mind if it sounds like Brahms or Dvorak. The problem with Thomson is that it is not even good Dvorak.

Schuman‘s 3rd Quartet from 1939 exudes sweeping energy in its outer movements and has moments of breathtaking lyricism and overwhelming beauty in all three movements, reminding me again of Britten’s first two. Mennin‘s 2nd Quartet from 1951 displays his customary, highly energetic, motoric allegros (and I definitely hear a reference to Shostakovich’s First Cello Concerto in the finale). Piston‘s Fifth and last Quartet is rhythmically vigorous and assertive in its outer-movements (dance-like even in the finale, although it is a triple fugue) in a way very reminiscent of Bartok. Its stern, brooding adagio moves at the confines of tonality and rises to an intense climax, and even the finale displays a tense lyricism. It was written in 1962 for the Berlin Festival and premiered by the German Kroll Quartet and it is very fitting: it sounds very German indeed.

Although Sessions‘ 2nd Quartet from 1951 (same year as Mennin’s) predates the composer’s “official” embrace of Schoenbergian serialism, its three brooding atonal adagios, with their elaborate contrapuntal/fugal activity, hark back to Schoenberg’s atonal period. Its two dynamic and agitated allegros exude a furious energy and a high-wire tension, with the first violin often often sent in uneasy upper reaches. The scherzo (22:27) is even dance-like – but it would be the Dance of the Golden Calf from Moses and Aaron. The first four movements play without break and are again here not cued. Timings are 8:05, 13:02, 22:27.

Excellent liner notes, thoroughly informative, with detailed descriptions of each work – I assume they come from the original LP box, as we learn, for instance, that “Peter Mennin is the youngest of the composers presented on this recording”, which is true of course, but sounds funny in view of the fact that all of them are now dead. The bios have been updated, though: dates of deaths have been added. 1st fiddler Harold Kohon is a bit strained in the upper registers in the most intense passages, but nothing to hamper enjoyment. I have another version of Hanson’s Quartet, by the Lyric Arts Quartet of Houston on Bay Cities BCD 1009 (link to my review reposted on this website), and the Kohons aren’t quite as intense and passionate (although in some of the fast sections they are), but somehow I was more taken by the composition here than when I heard the Bay Cities disc, maybe because it comes here in the context of other String Quartets of varying styles rather than of Hanson’s clichéd neo-romanticism. In Piston’s 5th Quartet, Kohon are neither as dynamic nor as tonally refined as the Portland Quartet (on Northeastern NR 9002 CD, part of their invaluable complete traversal of Piston’s Quartets and more), but the music is not betrayed (although some of the busy fugual interplay at the end of the finale would have needed some whip). In Schuman they are not as tonally lustrous as the Lydian Quartet on Harmonia Mundi HMU 907114, but they are as intensely lyrical and overall slightly more dynamic. They are NOT as dynamic, high-strung and intense as the Juilliard Quartet from 1958 (in dry, mono acoustics,

reissued in 2005 by Testament on SBT 1374, barcode 749677137427, with Berg’s Lyric Suite and Elliott Carter’s Second String Quartet) but more ample and lyrical. I wouldn’t have expected it but in Sessions the Kohons are incomparably better than the Juilliards in 1987 (on CRI CD 587): more spacious and lyrical and tonally beautiful (where Harold Kohon may sound a bit pitch-strained, in the most furious passages, you should hear Robert Mann, whose tone had much deteriorated by then), and also much more dynamic in the fast movements. They are also helped by the 1974 Vox recording, sounding more spacious and natural than the awfully congested Juilliard/CRI from 1987.

This set remains more than serviceable then, still today.