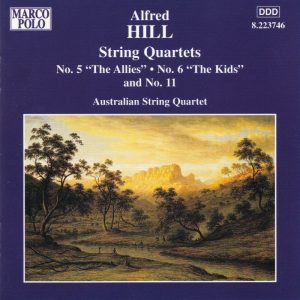 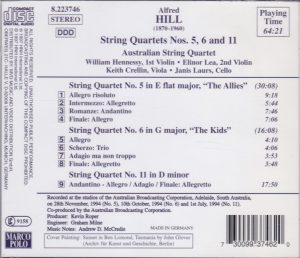 I don’t know, maybe Alfred Hill woke up one morning and said to himself, “I’ll write a series of string quartets that will be as beautiful as those of Dvorak“.

And the good thing about that is that, he did.

Frankly, I had never heard of Alfred Hill, didn’t know when he lived and composed, didn’t know what to expect when I bought this CD – or rather, I imagined that he was composer at the turn of the 19th to 20th century, or maybe early 20th century, Australian or New-Zealander rather than British, and I expected the music to be a little more advanced than that, although I didn’t expect anything radically avant-garde.

Turns out I was right on the spot. Hill was born in Melbourne, so it makes him an Australian indeed, and he lived from 1869 (apparently the date 1870, still used in the liner notes to the CD, has been disproven, see Hill’s entry on Wikipedia) to 1960, which makes him, indeed, a composer at the turn of the 19th to 20th century, although he straddled more the latter.

If you want to look at it negatively, Hill certainly illustrates the old-cliché that British – let me enlarge it here to “commonwealth-” – music of that era was hopelessly backward-looking, conservative, reactionary, you name it, and trying to cling on the 19th century when the 19th century was long gone. Hill’s musical training was in Leipzig, a bastion of musical conservatism indeed, and Carl Reinecke (1824-1910) was his model – certainly no paragon of the avant-garde either, even Brahms might have been a bit too modern for Reinecke. All those factors probably explain his compositional outlook.

If you want to look at it positively – and I do -, you can forget the dates, forget that, when the 5th and 6th String Quartets were composed, in 1920 and 1927, that style was about 30 years late – Dvorak’s first string quartet dates from 1862, the “American”, his 12th, from 1893, and his last production in the genre, the 14th String Quartet, was written in 1895. Forget the historical perspective, forget the derivativeness, and enjoy more quartets by Dvorak. They are lyrical, sunny, songful, brimming with a feeling of “joie-de-vivre” and tenderness. First movement of #5 transitions with hardly a bridge after circa 2 minutes from the tenderly songful to the merrily dancing. Scherzos and Finales are playful, slow movements filled with a sense of brooding tenderness and moving melodic invention. In the first two movements of String Quartet No. 5, although what I heard evoked many things, I couldn’t quite pinpoint it – a little bit of Brahms, a little bit of Ravel’s Quartet maybe? or rather D’Indy, or maybe Bridge? But it became inescapable in the slow movement and Finale, the music sounded straight out of the Bohemian or Moravian forests and countryside. Had Dvorak written the 5th and 6th Quartets, I’d be very happy with those additions to his output in the genre, so I’m happy about Hill’s derivations, if you want to call them that.

And if you wonder about the titles of both works, their relation to the music is not entirely clear. Hill rewrote the 5th Quartet “The Allies” as a symphony which he subtitled “The Four Nations”, which I gather has less to do with rugby (see what Wikipedia has to say about that – link will open new tab) than war (indeed, publisher indicates that the four movements of the symphony are titled “France – Artistic”, “America – Syncopated”, “Italy – Romantic” and “Britain – Nautical” – !!!), but how the music evokes that beats me. As for “The Kids”, apparently the quartet was written for the students of the New South Wales State Conservatorium of Music in Sydney, but I don’t hear anything in it that seems to make it easier to perform.

By 1935 and the 11th Quartet (the three movements play without break), Hill had moved on stylistically all the way to Ravel, which isn’t so bad considering that Ravel would die only two years later. Of course  I’m thinking here of Ravel’s own String Quartet, which is from 1903. Still hugely lyrical, but melodically and harmonically more daring than the earlier essays, not as distinctive in its sonic invention as Ravel’s, but a good evocation of it. In a somewhat similar vein, it reminds me of those of John Foulds and Lucien Durosoir.