An escapade from my current Mahler listenening. I had never heard of Aaron Avshalomoff (spelt Avshalomov on Wikipedia), I seized the opportunity of multiple offers by an eBay seller. Turns out that Avshalomoff was born in Siberia in 1895, which makes him Russian. He fled the Russian Revolution to the USA through North China (fastest way indeed from Siberia, if you look at the map). Didn’t work out for him in the US, so he returned to China and settled in Peking then Shanghai, where he remained until 1947 – “making his living primarily as a bookseller”, say the liner notes. The date 1947 (together with the fact that “during the last three years in China, Avshalomoff conducted the Shanghai Symphony Orchestra”, and that his music drama, The Great Wall, “enjoyed the patronage of both Mme Sun Yat Sen and Mme Chiang Kai Shek – the two Soong sisters who ended up on opposite sides of the Chinese Revolution” – see more about this on Wikipedia, link will open a new tab) suggests that Avshalomoff was on the side of the “Nationalists” back then – the anti-communist forces of Chiang Kai-shek, although the liner notes remain silent about Avshalomoff’s politics.

Liner notes again: during his thirty years in China, “Avshalomoff worked to evolve a synthesis of Chinese musical elements with Western techniques of composing for symphony orchestra and theatre. (…) Throughout his thirty years’ residence there he encouraged emerging Chinese composer to cherish and develop their own music heritage. All in all he was a major figure in the cultural life of China. (…) Acclaimed in China, that eminence did not translate into a career in America, even after performances of Avshalomoff’s works by Stokowski [who gave the American premiere of the tone poem “The Hutungs of Peking” featured here, in Philadelphia in 1935] and Monteux and a commission from Koussevitzky [the Second Symphony]”.

And what you read is indeed what you get: Chinese melodies in Western orchestral attire – or Chinese wine in Western bottles. I don’t know how “authentic” these melodies truly are, but they certainly fit our Western clichés of how “Chinese music” sounds like (and, mind you, that they are clichés doesn’t mean they are necessarily false: those clichés, or expectations, or sonic images, are born from many Chinese films or audio recordings, easily accessible in our globalized world).

A heart-on-sleeve lyricism pervades all three movements of the Violin Concerto from 1937. The outer movements are carefree and merry, the slow movement wistful and lullaby-like. It is richly and expertly orchestrated – the liner notes mention in passing that Avshalomoff was a “self-taught composer”, but I hear nothing in all three works that is tentative or amateur or awkward, on the contrary. The Concerto is superficial – no criticism implied: superficiality can be very entertaining, and I’ve been greatly entertained by the music. It’s the kind of concerto Heifetz (who obviously preferred Korngold to Berg) might have championed.

One of the features I’ve enjoyed most in the Concerto (other than, of course, its “Chinese-ness”), is the fact that the soloist plays almost continuously, and has extended solo cadenzas in the outer movements. And kudos to fiddler Rodion Zamuruev, a name hitherto unknown to me: he is superb.

As I was listening and listening again to the Concerto, something nagged me, it reminded me of someone else’s, with its sunny colors, insouciant and merry moods, lightheartedness and superficiality. Khachaturian’s? But there’s nothing in Avshalomoff’s of the vulgarity of Khachaturian’s – and, mind you, I hugely enjoy the vulgarity of Khachaturian’s Violin Concerto. Britten’s vaguely came to mind at times, but there is none of the seriousness and loftiness of Britten’s masterpiece. Walton, because of the sunny melodic lyricism ? But Walton has many moments with much more drama, tenstion and propulsion than Avshalomoff.

It might be something else that I can’t pinpoint right now, but the closest I could come up with is Rodrigo’s Concerto of Summer. Not that Rodrigo’s is to Spanish music would Avshalomoff’s is to Chinese music, but there is the same mood of carefree insouciance, the easy-to-catch melodies – but Rodrigo has moments that are far more somber than Avshalomoff ever attempts. And in the extended Cadenzas, the Sonatas of Ysaye, possibly.

I wondered if Avshalomoff’s “Chinese-ness” in the Violin Concerto sounded anything like the “famous” “Butterfly Lovers” Violin Concerto – famous in China and South-East Asia, that is. The latter is a piece I had heard of, encountered when compiling various label discographies, but never actually heard (and same with its “companion”, the “Yellow River” Piano Concerto). So I looked it up on YouTube – and found it to be everything I had expected: sweet, syrupy and sentimental in an insufferable way (and same with the pseudo-Hollywood-Rachmaninovism of the Piano Concerto). Yes, there are similarities between Avshalomoff’s Violin Concerto and the “Butterfly Lovers”; but Avshalomoff’s music is, I find, free of any of these corny and sentimental traits. But one last note about the Butterfly Lovers Concerto: YouTube leading automatically from one thing to another related thing, I chanced on a version of the Concerto that I assume is a transcription (the original piece was indeed written for Western instruments) for Erhu – the traditional Chinese two-stringed fiddle – and an orchestra visibly made of a mixture of Chinese traditional- and Western instruments. And suddenly it all made sense! There was a wonderful feeling of authenticity and appropriateness, the Concerto was still (in parts) sentimental but the sentimentality felt touching rather than corny (in fact, it made me wonder what Avshalomoff’s Concerto would sound like in a similar transcription). And that led to other things, contemporary concertos written for Ehru – a stupendous instrument, with nothing that sounds limited in comparison to its Western four-stringed counterpart – and mixed orchestra. For more on this (and access to the videos on YouTube), see my blog post.

Anyway, the Concerto may not be a revolution or a revelation and not a major piece, not Sibelius, Berg, Bartok, Britten, Prokofiev or Shostakovich, but I’ve found it hugely entertaining to hear.

“The Soul of the Ch’in” is a Ballet-suite from 1925-26 and it is not clear about which Chinese emperor – he is referred to in the liner notes as “Yien Wang”, but apparently Yān wáng or Yen-wang is a Chinese feudal title referring generically to the King of the State of Yan (link to Wikipedia); various clues including the name of his foe “Guo Chai” (who may be “Chai Rong” aka “Guo Rong”), lead me to think that it may be Emperor Liu Chengyou, “the second and last emperor of imperial China’s short-lived Later Han dynasty”, who reigned from 948 to 951. The Ch’in is, fittingly, a thirteen-stringed harp. The tone poem “The Hutungs of Peking” is in fact an orchestral “Cries of Peking” as there were “Cries of London” or “Cris de Paris” from Weelkes to Berio. I don’t want to set too much store on both works, again there is nothing revolutionary or even “advanced” in the music, they may sound like film music (a film set in China of course), stylistically they may evoke the ballets of Copland – another instance of “East Meets West”, and Appalachia Meets the mountains of Shanxi (one of the borders of the ancient State of Yan), the opening of The Hutungs of Peking is an evocation of “day rise” which may evolke Ravel’s Daphnis, but they are, as the Concerto, colorful and hugely atmospheric, and enjoyable, if you expect music to be entertaining rather than “revelatory”.

Excellent liner notes by Avshalomoff’s son Jacob, who also conducts the two orchestral pieces, although I would have liked to read some information about Avshalomoff’s fate and whereabouts after he left China in 1947. He died in 1964. According to his very terse Wikipedia biography, he had settled in the United States. His son Jacob (1919-2013) was the longtime director of the Portland Youth Symphony Orchestra, and his two grandsons are musicians too – it is David who conducts the Violin Concerto. Jacob was born in China but actually emigrated to the US ten years before his father. A mystery remains: “this recording was supported by the French Ministry o Culture and the Provence-Alpes-Côtes d’Azur region”. Nothing is told that would explain and justify why French public institutions would fund this recording by a Russian orchestra of a Russian composer having lived for years in China, and published by a label hailing from Hong-Kong. Avshalomoff’s biography is slightly more informative on French Wikipedia. 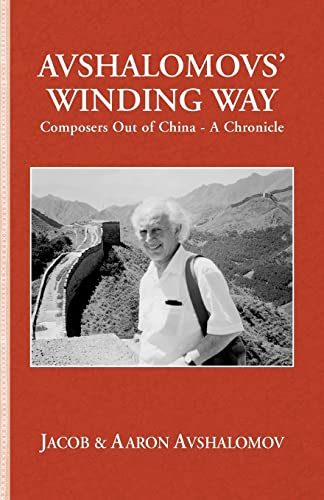