This August I’ve been busying myself with completing my (huge) discography of EMI’s budget series from the late 1980s and 1990s – Studio, Laser, Références, Great Recordings of the Century, Introuvables, Rarissimes, Rouge et Noir, Eminence, Classics for Pleasure, and that’s only a sample, EMI had many branches and a vast catalog to tap from. The research requires using my pet-method – follow the barcode! Just roll the sequence and see what you fish. Typically EMI’s barcode for its budget series in the early years was in the form 077776xxxx2y with 7 6xxxx 2 (preceded by three letters, usually CDM or CZS for the single CDs, CMS or CDS for sets) being the label number (full-priced issues would be 07777xxxxx2y if an individual CD and 07777xxxxx8y if a set. Editions from EMI’s German branch Electrola went by the barcodes 5099925xxx2y with 25 xxx 2 as label number. (I’ll keep it at that for the purpose of this post, to make it – seem – simple. In fact it is, once you get the logic).

Now, there may be a number of reasons why a  barcode doesn’t yield:

So, when the discographer finds a gap, he is confronted with a riddle: is there a gap because the label hasn’t used that barcode, or simply because the website you are searching does not list the CD, which otherwise exists? That’s why, when typically a barcode doesn’t yield on Amazon, to make sure I search on multiple other websites, Melomania, eBay, Discogs, and ultimately Google (see my blogpost from 10 April 2020 for more on my research methods). If it doesn’t yield after all that, than the odds rise that it doesn’t exist, although it’s not yet a certainty: it could simply not be listed anywhere, I’ve seen it, releases that I knew existed only because I had seen references in magazines, no trace showed up online.

And, so, here’s an interesting case that happened recently. CMS 7 63679 2, barcode 077776367927, is a 4 CD-set published in 1990 on the occasion of the bicentennial anniversary of Mozart’s death, a compilation of chamber Music and piano works. So, in principle, no release until label number 79 + 5 = 7 63684 2 barcode 077776368429. But that barcode, which should have been EMI’s next release, didn’t yield either on the Amazons (France, UK, US). So I used my alternative websites, and Google: nothing. So I was ready to pass on that one; still, as a last resort and just to make absolutely sure, I made a Google search on the label number, “EMI 7 63684 2”, not the barcode (problem with researching barcodes is that, on some websites, they are listed with blanks, as they appear on the back cover of the CD, like 07777x xxx2 y, so search on barcode all-attached won’t yield). And, surprise, puzzlement, it yielded: disc listed litterally around the corner from where I live: on Melomania!

The puzzlement, because, if listed on Melomania, it should have responded to a call on the barcode, 077776368429, and it didn’t. Plus, if a 6-CD set, the next EMI listing should have been 684 + 7 = 077776369129; but, no, 685 is filled (2 CDs EMI Références  CHS 7 63685 2 Mozart Idomeneo conducted by John Pritchard in Glyndebourne barcode 077776368528, then CHS 7 63688 2  Mozart Complete Piano Sonatas by Walter Gieseking on 8 CDs).  So that release, 7 63684 2, if truly attested, would have been one of those “pirate” fill-ins that I occasionally encounter? Plus, Melomania’s listing didn’t provide photos, to enable me to understand the apparent incoherence between label number and barcode: Sibelius by Berglund with the Helsinki Orchestra on 6 CDs, could it be a Japanese edition, which sometimes use Western label numbers but Japanese barcodes? More research didn’t help me corroborate that. Could it be a listing for Warner’s recent (2017) reissue of apparently the same recordings, barcode 0190295869151? But if so, why the label number corresponding to EMI’s releases from 1990, and why did it not show up either when I searched 0190295869151 on Melomania’s website (which takes you to a genuine entry for the Warner set). Plus, their mystery EMI listing said 6 CDs, and the Warner reissue has 5. Of course, that “6” could have been a typing mistake from Melomania… 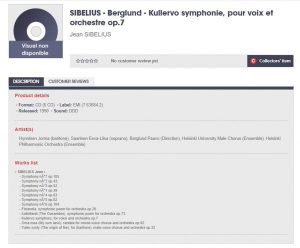 I wasn’t even sure that all performances were with the Helsinki Philharmonic, Melomania’s product info is not always entirely detailed, and Berglund also did an earlier Sibelius cycle with the Bournemouth Symphony Orchestra…

After spending an unreasonably large amount of time on the research, I was about to give up and inscribe it in my discography as “dubious”, when I made a last-ditch effort and Google searched on “7636842 (all-attached) Sibelius”. And… bingo: a yield, a selling platform in Finland. 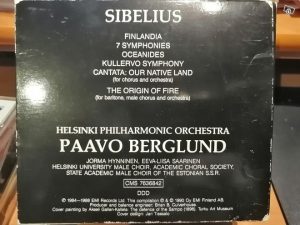 …but no image of the barcode unfortunately. You can see part of the barcode of one of the CDs comprising the set, but only the last digits, 688, just enough to figure out that it did not correspond to the set’s label number and didn’t give any lead.

So here’s what I did – “pel piacer di porle in lista”, that’s the (only) motivation Don Giovanni (ever) gives (in the “Champagne” Aria) of his lust for conquest, “for the pleasure of adding her to the list”: with the help of Google’s Finnish to English translator, I registered on the Finnish selling platform and got in touch with the seller. He was kind enough to provide the requested info: the set itself bears no barcode, and contains 6 individual barcoded CDs, themselves Finnish releases badly listed on the major Amazons (if listed at all, but Google search them, and they’ll show up):

And that makes 6 CDs alright. After some agonizing I decided not to buy it (I don’t even know if seller would have accepted to send outside of Finland): as much as I prefer having first editions, the Warner reissue is more complete (it adds Tapiola) and cheaper. And, yes, they managed to cram it all on 5 CDs.

On the other hand, I did buy some (cheap) EMI rarities that my systematic barcode research fished out of the depths of oblivion: 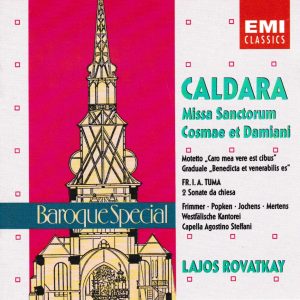 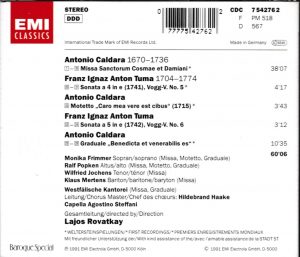 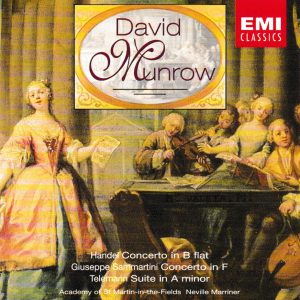 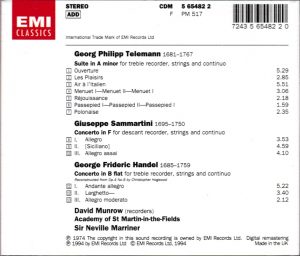 (rare recordings of David Munrow as flautist – he is recalled more as a conductor of early music, and he died tragically early, less than three years after these recordings)

And this, a real rarity from EMI Spain: 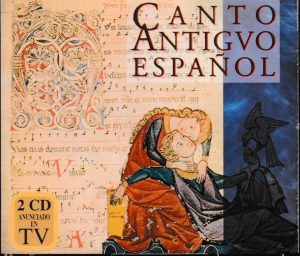 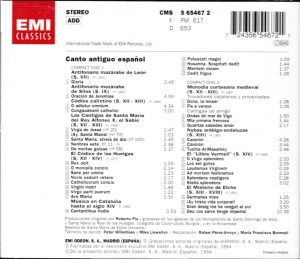 More in a next post about some other rarities from Spain: Zarzuela! Stay tune.

But all these hours of research (and writing this post!) for a minuscule entry in my discography! No wonder I don’t finish anything!