Just received Warner’s 65-CD set of André Cluytens The Complete Orchestral & Concerto Recordings (2017), barcode 0190295886691. Found it for cheap enough, less than 2 dollars per disc with shipment, and thought I was making a good deal. 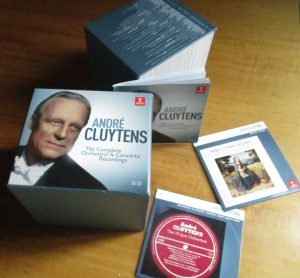 First, the grudges. I resent Warner’s policy of erasing all signs and the glorious memory of EMI and its affiliate trademarks, His Master’s Voice, La Voix de son Maître or Pathé, by substituting the trademark “Warner”. And it’s not just limited to this set, it’s in all of Warner’s reissues, calling them “The Warner Recordings” and similar titles. No, those artists never recorded for “Warner” – when EMI was created, in 1931, from the merger of British Columbia and His Master’s Voice (whose history of course goes even further back, to 1901), Warner was still more than 50 years away! So why hide the name EMI? Has it become anathema? Was it once headed by Harvey Weinstein or Roman Polanski? Or is there a legality I’m not aware of, by which Warner is banned from using the label name “EMI”? Whatever that may be, who – what classical music lover –  cares about Warner , when they have the glorious heritage of EMI? 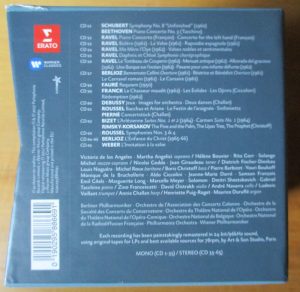 And it’s even worse with this box: why the hell did they decide to publish that set with the logo “Erato”? Unlike Munch or Martinon, Cluytens never recorded for Erato; the set’s liner notes even boast that he always remained faithful to EMI – but, since that little presentation is signed “The Catalogue Team of Erato and Warner Classics”, they have to use a twist of language, “a conductor… who was always loyal to this company”: yeah, guys, the company was EMI, with the labels La Voix de Son Maître and Pathé, never “Warner” or “Erato”. I think Warner’s policy is that, if its a French conductor (Martinon for instance) or affiliate (Cluytens, of course, was Belgian), publish it under the Erato logo, formerly a French label! Yet, the Charles Munch box was published – with the typically loathsome title “The complete recordings on Warner Clasics” – solely under the Warner logo. Go figure the logic of those non-governmental bureaucracies…

Okay, I needed to vent that out. I’ve been hard-working this past month on a discography of some of EMI’s past collections of historical reissues, “Les Introuvables”, “Les Rarissimes”, “Pianistes français”, “Artist Profile”, “Icon” and the likes, and have been regularly stumbling on those “misappropriations” by Warner of the EMI name, and they have irked me.

It’s a magnificent reissue, and kudos and genuflections to “The Catalogue Team of Erato and Warner Classics”. If erasing the trademark EMI is the price to pay to get such magnificent reissues, play on, give me excess of erasement! 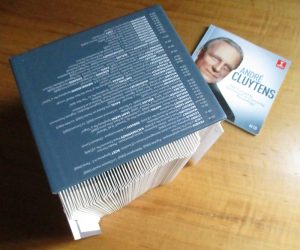 65 CDs then, laudably presented in chronological order of recordings, with precise information on recording date and venue, and with all their cardboard slips nicely reproducing the cover art of the original releases – nice touch, proving that this was no slapdash reissue but a work of true care. Not ALL of Cluytens’ recordings are there – the box leaves out the opera recordings, and that’s fine with me, because I’d rather have these operas individually, with complete librettos. But, as the title says, all of his orchestral and concerto recordings are there – and that includes the masses and oratorios, Fauré’s Requiem, Berlioz’ L’Enfance du Christ, Debussy’s Martyrdom of Saint Sebastian and Stravinsky’s Persephone… but not the 1959 Berlioz Damnation of Faust with Rita Gorr and Nicolaï Gedda, although whether it is or not an opera is anybody’s guess. 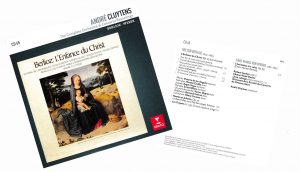 But there’s more. A significant chunk of this material, especially the later, stereo recordings, had been, of course, previously reissued by EMI and other labels, usually in their mid-price (EMI Studio) or budget-price collections. His noted Ravel cycle with Orchestre de la Société des Concerts du Conservatoire (including the reference recording of the Piano Concertos with Samson François), and superb Beethoven Violin Concerto with David Oistrakh, were always available on CD. I have the Complete Beethoven symphonies with the Berlin Philharmonic – as the liner notes point out, the FIRST complete recording done by the orchestra, completed three years before the one they did with Karajan for DG – on a valuable reissue by a once serviceable and long defunct label from the Netherlands, Disky, HR-703732 (2001), barcode 0724357037327, but it was many times released by EMI, (1995) 724348341228, (2006) 094636753027, (2010) 5099964830322 and more. Some Cluytens rarities had been reissued by EMI France on their “Introuvables” series (“Cluytens as accompanist”, 1999, see my – soon to be published (I hope) – complete discography of “Introuvables” and “Rarissimes”) and “Rarissimes” (2004).  In the early 2000s, Testament had again been precious in bringing back rare Cluytens from the 1950s and mono era (Beethoven Concertos with Solomon, Concerto recordings with Gilels, his first and mono recording of Beethoven’s Pastoral symphony with the Berlin Philharmonic, which he later remade in stereo for his complete traversal, works of Berlioz, Saint-Saëns, Franck, Bizet, d’Indy, Debussy, Ravel) and 20th century repertoire in stereo (Shostakovich’s 11th Symphony, Roussel…). All of that is now gathered in this single box. 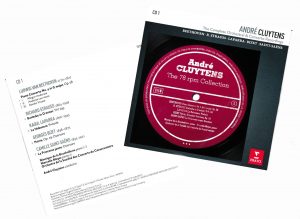 And what make’s the set even more invaluable to the collector, is that they’ve managed to include unpublished recordings – and not just trinkets! An early Beethoven Fourth Piano Concerto with Monique de la Bruchollerie from 1943 which had never been released – I mean, 75 years in the vaults (CD 1)! Excerpts from the rare and beautifully Ravelian ballet from Gabriel Pierné “Cydalise et le chèvre-pied”, recorded in November 1951 with the French National Radio Orchestra, “for which (say the liner notes) the editing of the original tapes was complete especially for this edition” (CD 6). Like… wow. Chabrier’s España which – and this is hard to believe – was discovered during the remastering sessions, at the end of a tape devoted to the recording of Beethoven’s piano concertos 2 and 4 with Solomon and the Philharmonia (CD 13) in November 1952. Or again, Handel’s Water Music (in Hamilton Harty’s arrangement), from October 1955 with Orchestre de la Société des Concerts du Conservatoire (CD 26), the stereo versions of Strauss and Smetana made with the Vienna Philharmonic in January and December 1958 (CD 36): they had been published on LP in mono only, and likewise, for the two Strauss pieces, Don Juan and the love scene from Feuersnot, on Testament’s CD reissue, SBT 1255 (2003) barcode 749677125523. Others were published on 78rmp or LP but, claim the liner notes (and I am inclined to trust them), never yet on CD: Haydn’s Symphony No. 94 with Orchestre de la Société des Concerts du Conservatoire (hereafter OSCC) from March 1950, as it had been “released only in Italy” (CD 4). On CDs 7 & 8, Cluytens’ first recording of Berlioz L’Enfance du Christ (June 1951) with the stalwart singers of the French radio Hélène Bouvier, Jean Giraudeau, Louis Noguéra, Michel Roux and OSCC (it is Cluytens’ stereo remake and his last completed recording, begun in September and October 1965 and completed in November 1966, with OSCC again and the international stars Victoria de Los Angeles, Nicolai Gedda and Roger Soyer, on CDs64 and 65, that envoyed the widest circulation, all but obliterating the memory of the earlier version – which I happen to have on LP, passed on to me by my father….). More: Debussy’s Martyre de Saint-Sébastien, a very-complete version with spoken text, recorded in April ’54 (CDs 22 & 23),

I haven’t yet checked in detail for previous CD reissues on labels devoted to historial reissues like Pearl, Music & Arts, Dante and the likes, but other even than those claimed “firsts on CD”, the set is precious for bringing back all the material from the 78rpm (Cluytens started his recording career in 1943) and mono-LP eras which, for all its efforts, Testament had only begun tapping. I’m especially happy to have on CD a recording which I had on a very-used and woefully-scratching LP, the rare incidental music to Massenet’s Les Erynnies from September 1952 (CD 20). Emmanuel Bondeville’s symphonic poeme Gaultier-Carguille and excerpts from the opera Madame Bovary (CD 15, October 1953) are true rarities, even for me. The fact that Cluytens remained ever faithful to EMI – unlike, say, Munch, or Martinon, or violinist Christian Ferras, who recorded for various labels that are not (yet) in the ownership of Warner, like RCA or DG – means, also, that what you get on those 65 CDs is, truly, his complete orchestral recordings.

The liner notes – other than the general presentation by the “Catalogue Team of Warner and Erato”, a chronological survey of Cluytens’ recording career by François Laurent – are serviceable and interesting, and I find Laurent laudable for not papering over, as might have been the temptation in this kind of tribute, the more troubling aspects of Cluytens’ early career, especially his apparent sympathies with the collaborationist Vichy regime and Germany (he was later acquitted of the charges). The booklet also contains a moving tribute from soprano Anja Silja, who had met Cluytens in 1964 through the auspices of Wieland Wagner. Silja, who was 24 then (and singing Salome! She had made here debut in Bayreuth as Senta from Fliegende Holländer in 1960), had a personnal relationship with Wagner’s grandson and intendant of the Bayreuth Festival, who suddently died, in October 1966, not yet 60. Then she had a relationship with Cluytens – who died in June 1967. I don’t know who dared to date her thereafter – well, conductor Christoph von Dohnanyi did (reminds me of the story of Boulez asking a libretto for an opera to Jean Genet – and then Genet died. Then asked young French playright Bernard-Marie Koltès – and Koltès died. Then aksed Heiner Müller – and Heiner Müller died. And Boulez never wrote an opera).

Okay now I need to listen to these 65+ hours of music. Either the “stay-at-home” order never ends, or I manage to do it in three days without sleeping.